If this is a joke, it’s a very elaborate joke

Vorjack is assuming this is just an elaborate joke. David Swartz is praying it’s just a hoax. I honestly can’t tell.

Help, Mom! There Are Arminians Under My Bed! 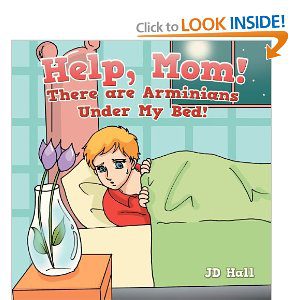 Come along on a journey with Mitchell, as he recalls his nightmare for his mother. Mitchell was in a land of darkness and gloom, when due to no cooperation of his own, a Knight in shining armor saved him and all the other captives He intended to save. “Help, Mom”is a children’s allegory designed to teach your kids the Doctrines of Grace through the use of creative story-telling.

JD Hall is the pastor of Fellowship Church in Eastern Montana, where he lives with his wife, Mandy, and three children. JD is a co-founder of Reformation Montana, a network and mission society consisting of Reformed Baptist churches in Montana and the surrounding region. He is a columnist for the Intermountain Christian News, and operates the Pulpit and Pen website. JD received his B.A. in Christian Education from Williams Baptist College and M.A. in History from Arkansas State University.

Some of the customer reviews posted at Amazon are clearly jokes — including some very funny ones:

We bought this for our three boys, Beza, Calvin, and Van Till! They loved every minute of this book! Buying this book will root my children in a holy fear of the Arminian heresy!!! The joy they got out of this book made me almost as happy as when little Calvin started quoting the Institutes, little Van Till argued for the existence of God by assuming He existed, and little Beza threw rocks at that Methodist kid in his class! I know that God has predestined them to great things!!! I am so proud of my three little supralapsarians!!!”

I was predestined to read this book! (4 stars)

I highly recommend this book to anyone who has theologically-minded children! And by anyone I mean anyone in the whole world…And by whole world, I mean the elect.

I love the colorful illustrations, and all bible references were in the ESV, which was nice. This is a great story for Reformed children between the ages of 4-12, but would also be appropriate for pre-teen Dispensationalists and adult Pelagians.

But are they contributing to a joke, or lobbing jokes at an earnest, actual, not-intended-to-be-funny book?

I mean, come on, “due to no cooperation of his own, a Knight in shining armor saved him and all the other captives He intended to save” — that had to have been written by someone intending to lampoon Calvinism, right? That image — a “heroic” Knight rushing in to rescue only an elect few captives — seems like a vicious, mocking caricature of Reformed theology.

But that “About the Author” blurb mentions a website — JD Hall’s Pulpit & Pen.

And that site really, really doesn’t seem like a joke. It offers the sermons of JD Hall, and lots of ’em. And those sermons are just exactly the kind of thing you’d expect from the kind of person who would, without irony, write a “children’s allegory designed to teach your kids the Doctrines of Grace” featuring “a Knight in shining armor” who rescues those elect few “captives He intended to save.”

If this is a joke, it’s an incredibly elaborate joke — a hoax perpetrated by a comic genius who finds Christopher Guest’s troupe insufficiently subtle.

• Micah J. Murray, “The Day I Stopped Believing in God”

• Richard Beck, “I Don’t Think Calvinists Can Be Therapists”

• Richard Beck, “More on the Impossibility of Calvinistic Christian Psychotherapy”

June 6, 2013
Tabitha, Lydia and the menace of female breadwinners threatening our 'complementary relationships'
Next Post