Alabama pastor announces his opposition to the Golden Rule

For decades, the Boy Scouts of America excluded boys who were gay from participating in scouting.

This was cruel and unfair, as Greg Walker describes:

“It’s hard on a personal level to say to a troop of young boys who have done nothing wrong and to the leaders, ‘You’re not welcome here,'” Walker explained. “I didn’t make the decision. Boy Scouts of America made that decision.”

Walker pinpoints exactly why the scouts’ policy of excluding gay boys was unjust. 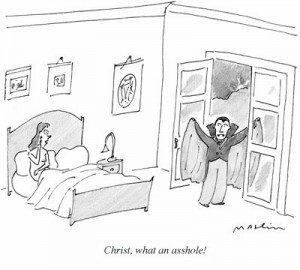 It is simply wrong — unjust, unfair, uncouth, inhospitable, immoral, sinful — to say to “young boys who have done nothing wrong … ‘You’re not welcome here.'” And that’s exactly what the Boy Scouts’ anti-gay policy said to gay youth for many years.

He was describing his own response to that policy — which was to ban Boy Scouts from meeting at his church, the First Baptist Church of Helena, Alabama.

If Walker isn’t allowed to single out gay youth for exclusion, then he feels he has no choice but to exclude all youth.

Pastor Walker seems not to realize that the Golden Rule is a commandment. He also seems to have forgotten about Rule No. 1.

More and more I’m convinced that the universal cartoon caption also applies as a universal response to public statements by Southern Baptist leaders.