I used to think of Charisma magazine as basically Christianity Today for the Pentecostal/charismatic branch of American evangelicalism. It was a glossy general-interest magazine geared toward that sub-set of the subculture, with church news, celebrity profiles and lifestyle-trend pieces aimed to appeal to that audience.

Like CT, it was generally conservative — reflecting the conservative social and political views of its writers and readership, but not aggressively partisan, and thus distinct from the transparently political operatives of the religious right. 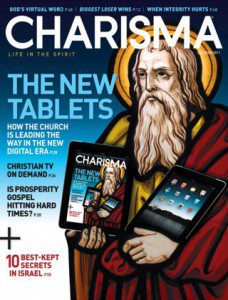 But at some point — I’m not sure exactly when this happened, I wasn’t paying that close attention to it — it seems Charisma and its publisher Steve Strang have decided to embrace the religious right model. Strang these days seems to aspire to be the next Tony Perkins. He wants to be a political player and, like Perkins, he won’t let facts or truth or honesty hold him back from pursuing that goal.

• Steve Strang, “DOJ Diversity Police Seeking to Shackle Christians“: “The Department of Justice is robbing Christians and other conservative people of our rights to believe as we choose and to be free to speak in pushing a politically correct emphasis for the Lesbian, Gay, Bisexual and Transgender (LGBT) agenda …”

• Os Hillman, “4 Questions to Consider in Response to the Gay Agenda“: If “government and businesses … have to offer the same benefits to homosexual couples as … to heterosexual couples,” Hillman warns, then America is on a “slippery slope” and is “headed the way of Europe” or could even “end up like Canada.” If that happens, Hillman says, then America will be judged like the Amorites: “The Amorites were a very ungodly people. God saw their sin as so great that He was going to use the Israelites to wipe them out.”

• “Did Boy Scouts of America Sell Its Soul to the Devil?” asks the headline of Raynard Jackson’s Charisma column. Not wanting to keep readers in suspense, Jackson answers that question in his first sentence: “When the Boy Scouts of America’s (BSA) leadership voted to allow openly homosexual kids to become Boy Scouts, they, in that one act, sold their souls to the devil.”

And in the pages of Charisma, selling your soul to the devil is not a figure of speech — as this video posted by Matthew Paul Turner illustrates:

• “I have nothing against gay people,” writes Jennifer LeClaire, the news editor of Charisma. “That said … There is a gay agenda and it’s working overtime to send millions to hell.” LeClaire previously argued that demon rape by succubi and incubi causes people to become gay. Following the mass-shooting of elementary school students in Newtown, Conn., LeClaire cited notorious liar David Barton on the importance of prayer in school and wrote, “Can We Please Put Prayer Back in Schools Now?”

This noxious stew of lies, legends and delirious fantasies about the Other can only be written and published by people who do not know and do not care about the human beings they’re dehumanizing. This is nasty, evil stuff.

I don’t claim to have any special gifts of spiritual discernment, but I can hear what these Charisma writers are shouting at the top of their lungs. This is hate. And lies. And lies in the service of hate. Whatever spirit is at work in this, it cannot be a holy one.