Like many small children, when I was a little kid I was worried that there might be … something in my bedroom closet — something that lurked there, hidden, waiting until after dark to creep out and do me harm. 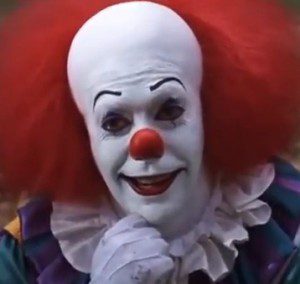 My dad was pretty terrific about that. I don’t remember many things from when I was that young, but I remember when he came in with a flashlight and we searched all through the closet to see that nothing was there.

“Once we dealt with the demonic spirits, and took authority over them,” Fischer says, “then that problem was resolved and it went away.”

That’s just terrible parenting. It reminds me of this bit of advice from Mister Rogers:

Some families give their children a spray bottles with water as “monster spray,” or put a sign on the door “No monsters allowed.”  That may seem to work in the short term because children are so trusting of us adults and so willing to believe the fantasy — but what it could say to them is that their parents, too, think that monsters are real, and that the monsters might actually be there.  In the long term, we want them to know that monsters aren’t real and they really are not there.

That describes exactly what Fischer is doing with/to these children. He’s giving them imaginary “monster spray” that doesn’t really do anything except confirm in their minds that “monsters are real, and that the monsters might actually be there.”

Witchfinder General Bryan Fischer really believes in the witches he is hunting:

There are covens. These are clusters of witches that meet. They’ll start meeting at midnight, they’ll break up a 2:00, 3:00 in the morning, and they will send demonic spirits out on assignments against their chosen targets. One night, 2:00 in the morning, I’m awakened by something grabbing my ankle. … Something grabbed my ankle and was trying to pull me out of the bed.

Fortunately, Fischer says, he knew the counter-spell. He said “Jesus” and “it went away.”

This calls to mind something else Fred Rogers said about the fears of small children:

Fears might also grow out of children’s struggles with their own angry feelings at their parents for making rules and setting limits, paying more attention to a new baby than to them, or for not giving them something they really want. Children can be afraid of getting too angry at their parents because they wonder if maybe their anger could result in losing their parent’s love, and that would be devastating. They sometimes project those angry feelings onto some outside thing — a dog, a tiger, a vacuum cleaner or a toilet drain — and then they fear that the very angry thing may just destroy them.

I think what Mister Rogers says there explains a great deal about Bryan Fischer and his followers.

“What brought me into the conversation,” with the children he talks about, Fischer says, is that these kids “were very disobedient, very rebellious to their parents.”

Consider for a moment the kind of church and the kind of family in which it makes sense to the parents to invite someone like Bryan Fischer into their home to speak to their children about proper discipline. The threshold for what such parents regard as “very disobedient, very rebellious” is probably not very high.

So these kids are in trouble with mom and dad — big trouble, so big that their parents have called in the Witchfinder General to talk to them. But with his very first question, he provides them with an escape hatch: “I would ask them if they’d experienced any demonic presences in their room.” There’s no need to take the blame themselves — Fischer is practically pleading with them to pull a Flip Wilson and say the devil made them do it.

So they tell Fischer what he wants to hear:

And he swallowed it. No getting grounded or spanked or forced to copy pages out of 2 Chronicles longhand or whatever else passes for punishment in such households. All the kid has to do is nod earnestly as Fischer prays for her, then he goes off to tell their parents that the kid was just acting out of love for them because they’d been threatened by the scary monster under her bed.

If that’s what happened here, then I’m impressed with this kid. And I hope that is what happened, because the other possibility is too depressing to contemplate.

Either way, though, thanks to Bryan Fischer’s hard work it’s 10-to-1 odds that this kid will be an atheist by age 19.

July 25, 2013 1 year ago: Anti-government, anti-democracy
Recent Comments
156 Comments | Leave a Comment
"How was this spell used in the game? What prompted the PC to develop it? ..."
damanoid Sunday favorites
"Like conceiving an idea? Or having their plans miscarry."
Magpie Sunday favorites
"That kinda happened near the end of the scenario :)"
Spirit Plumber LBCF, No. 260: ‘Another world’
"It occurs to me that if you were wanting to fight Left Behind's UNick air ..."
Mits LBCF, No. 260: ‘Another world’
Browse Our Archives
Follow Us!

Listening To Margaret Atwood's The Handmaid's Tale And...
During Christmas break, I spent the long drive to family in Iowa...
view all Progressive Christian blogs
What Are Your Thoughts?leave a comment
Copyright 2008-2017, Patheos. All rights reserved.