Jesus Is Not At All Like That (my video for the NALT Christians Project) September 4, 2013 Fred Clark

When John Shore invites me to do something, I usually say Yes — even if that something involves leaving my comfort zone hidden behind words on a screen and figuring out how to make and post a video, which I’d avoided doing up until now.

So here’s the video I made for the NALT Christians Project:

And in case you’re not able to watch that video (or were too distracted by nose and chin to pick up on the words), here’s a transcript:

And I don’t believe that being gay is a sin.

Not everyone in my evangelical tribe agrees with that. It goes against some of our tribe’s boundaries. 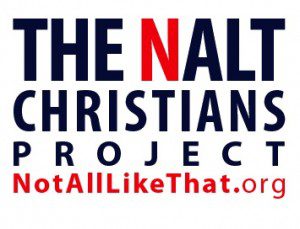 Tribes are big on boundaries. We like to create them, and police them, and enforce them. And some of the evangelical tribal gatekeepers say that anyone who doesn’t condemn LGBT people is out of bounds, and no longer really an evangelical Christian.

But that’s just dumb. Condemning gay people isn’t what made me an evangelical Christian in the first place, so how could not condemning gay people mean I’ve suddenly stopped being one? I’m an evangelical Christian because Jesus loves me and declares me to be a beloved child of God. Not because I agreed to hate some other group of God’s beloved children, or to deny them their full equality in society and in the church.

The point is, it doesn’t matter what the tribal gatekeepers say about who is and isn’t “really” an evangelical Christian. Because we’re not all like that.

But then she met Jesus. And she went away rejoicing because Jesus was not like that.

September 4, 2013
The NALT Christians Project offers permission and an invitation
Next Post