1. “U.S., Russia reach agreement on Syrian chemical weapons.” Steve Benen writes: “The crisis isn’t over, but the diplomatic solution took an important leap forward this morning. For all concerned, it’s heartening news — and a development that was hard to even fathom a week ago at this time.”

2. Mumford & Sons kicked out of Atlanta strip club. That sounds like a sordid tale of rock-n-roll debauchery, until you read the details and realize it had to do with karaoke and cell phones. (Note to The Independent: I appreciate that “clean-cut” generally refers to upstanding morals, but it’s really not the best term for a bunch of tousled and bearded musicians.)

3. AIDS-denying racist religious right spokesman Bryan Fischer borrows an argument from corporate-tool hack-for-hire E. Calvin Beisner: “It Is ‘Ignorant, Ignorant, Ignorant’ to Think Human Behavior Can Affect the Climate,” Fischer says. Fischer, like Beisner, argues that God is in control of the Earth’s climate, and that therefore nothing humans do can change it because the Bible tells him so.

Well, let’s see if the Bible does say that. Hmm, nothing there on page 1 or page 2 to contradict what Fischer says. But, uh-oh, what’s this on page 3? “Cursed is the ground because of you … thorns and thistles it shall bring forth for you.” Seems like the Bible doesn’t agree with Beisner and Fischer, because that’s clearly a case of climate change as a consequence of human behavior. And what’s this bit here on page 5 of my Bible? “Then the Lord said to Noah …”

If you don’t believe that humans can cause climate change, you should probably rip the story of Noah out of your Bible.

4. “‘Hug an Atheist’ film tries to put a human face on unbelief.” “Can bubbas love Muslims? A new documentary tries.” We humans do this thing where we tell stories. We humans also do this other thing where we generalize and stereotype and Other, pretending that we already know their stories, and that their stories are completely unlike our stories, and that we don’t need to hear their stories. The more and better we do the first thing, the less we’ll do the second.

5. Every time you hear a politician talk about those who “create wealth,” remember this graph: 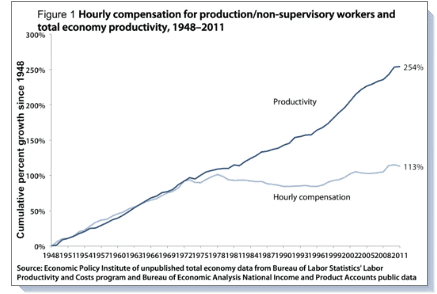 “Productivity” refers to making stuff and doing stuff. That’s the business of “wealth creation.” Today, wealth-creators work for rent-seekers, and as this graph shows, the rent-seekers have been taking a bigger and bigger slice of all of the wealth that workers are creating.

It turns out there really is a class of moochers and parasites, siphoning money from the rest of us. But it’s not the idle poor, it’s the idle rich.

7. Elvis Costello and The Roots.