1. A flurry of good recent posts about “creationism,” each of which, in one way or another, recognizes and respects the high stakes involved for people in bondage to young-Earth creationist ideology:

2. Some fraternities and sororities, I’m sure, are wonderful organizations. Many may add more value to the world than they subtract. For the most part, though, the Greek system is an elaborate attempt to preserve high school in college. And high school — meaning the whole perverse value system of popularity, conformity and social pressure that upholds privilege by pressing down on most people — is not something that ought to be preserved. So I suppose integrating fraternities and sororities at the University of Alabama is a positive first step, but I’d rather see them done away with entirely. One thing every college student ought to be learning is that real life isn’t — and shouldn’t be — anything like high school. 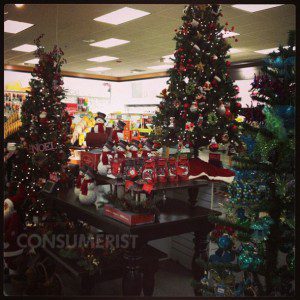 3. “And in the quick of the night they reach for their moment / And try to make an honest stand …”

5. The Consumerist is starting it’s “Christmas Creep” watch early this year. September 18. That’s the date on which the picture accompanying this post was taken. September 18 is summer. I’m told that the muzak at the store where I’m working part-time starts playing Christmas music in early October and continues into January. So, then, I work three eight-hour days a week, and the Christmas music will be inescapable for about three months. That works out to about 288 hours or, literally, 12 Days of Christmas Music.

6. I’m still getting caught up from an unexpectedly hectic/scary week, so I haven’t yet had the chance to write about the last cool thing Pope Francis said in public, but already he’s at it again:

Men and women have to be at the centre (of an economic system) as God wants, not money. … To defend this economic culture, a throwaway culture has been installed. We throw away grandparents, and we throw away young people. We have to say no to his throwaway culture. We want a just system that helps everyone.

7. J.B.S Haldane said that “The universe is not only queerer than we suppose, but queerer than we can suppose.” And he was far better at such supposing than I will ever be. Which is just to say that I wish I could tell you that I understand what an “amplituhedron” is, but I don’t.

“We imagine space-time is a continuous thing, but because it’s impossible to talk sharply about that thing, then that suggests it must not be fundamental — it must be emergent,” said Nima Arkani-Hamed, a professor of physics at the Institute for Advanced Study in Princeton. But if you told me that was a quote from Pete Rollins discussing theology, I’d probably believe you.

Progressive Christian
It ain't no sin to be glad you're...
slacktivist

Progressive Christian
People should have told you you were awesome
slacktivist