Buck Williams is sailing up the Jordan River toward Galilee, which is a bit like sailing up the L.A. River to Glendale, but we’ve already covered that. Buck is praying for God to direct him to his friend, the ex-Rabbi Tsion Ben-Judah, when suddenly the boat’s engine stops and Buck is drifting in the dark. “Trouble, Michael?” he asks the riverboat captain he hired to take him up the river.

“No trouble, Mr. Katz. Until your eyes grow accustomed to the darkness, you’re not going to be able to see that I’ve got a high-powered weapon pointed at your head. I would like you to remain seated and answer a few questions.”

Ooh — action and adventure! Buck is face-to-face with a killer on the river — just like when Sideshow Bob had Bart Simpson trapped near Cape Feare!

Buck felt a strange calmness. This was too bizarre, too strange even for his weird life. “I mean you no harm, Michael,” he said. “You have nothing to fear from me.”

“I’m not the one who should be afraid just now, sir,” Michael said. “I have twice within the last 48 hours fired this weapon into the heads of people I’ve believed were enemies of God.”

This prompts a heated back-and-forth in which Buck and Michael take turns insisting that they are not enemies of God, but faithful servants, and challenging one another to prove it. 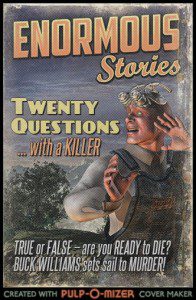 I suppose, though, that in the universe of these books, that question isn’t necessary. In the world according to Tim LaHaye and Jerry Jenkins, there is only one God and everyone knows this, and so everyone who speaks of “God” can only mean one thing. Some few people in this world choose to be “servants” of this God, while everyone else chooses to be an enemy of God. Some of the enemies of God may pretend to be atheists or they may pretend to believe in some other God or Gods, but they’re not fooling LaHaye and Jenkins with such claims. The authors know that these enemies of God all really know the one, true truth, but then they willfully reject it so that they can indulge their sinful desires for sex, drugs and rock and roll.

That’s also why it doesn’t bother Buck that the man pointing a gun at him claims to have killed two people in the last two days because he believed they “were enemies of God.” Buck regards such killing as reasonable behavior toward God’s enemies. It doesn’t occur to him that this guy might be a serial killer dumping bodies in the river because his neighbor’s Labrador retriever told him that “God” wanted him to.

Michael tells Buck that the two people he killed were headed up the river “looking for someone I don’t want them to find”:

It’s your basic Holy Grail Bridge of Death scenario: “What is your name? What is your quest?” Answer wrong and you die.

“But Michael, until I’m sure you are on my side, I could never risk revealing that information.”

“Even to the point where you’d be willing to die to protect your friend.”

… “I am impressed with that answer,” Michael said.

And so we’re at an impasse in this little stand-off. Michael has no way of knowing whether Buck is another of the “wrong people looking for the wrong person” or if maybe he’s the right person looking for the — in that case — right person. And Buck can’t trust him enough to just say who he is and who he’s looking for without putting both himself and Tsion in danger from this killer riverboat captain.

“Excellent,” Michael said. “True or false: the person you are looking for is young.”

Michael keeps firing true-false questions at him until, after a full page of this, he’s established that the person Buck is looking for is an older Jewish male who is bigger than a breadbox and is educated but not a medical doctor. The answer to every one of Michael’s questions is “false,” so if this were an episode of What’s My Line?, Buck would have won $30 by now even though it seems Bennett Cerf is closing in on the solution.

Michael stepped forward and pressed the barrel of the weapon against Buck’s throat. Buck grimaced and shut his eyes. “The man you are looking for is a rabbi, Dr. Tsion Ben-Judah.” Buck did not respond.

There’s a tense moment, with the gun pressed against Buck’s neck, as it sinks in for both of them that this correct guess doesn’t actually solve the problem here.

Those are, indeed, two of the four possibilities here — the two that would result in Michael killing Buck. But rather than mention the two other possibilities, Buck decides to have theological discussion.

“But in the latter case,” Buck managed, “you would have been lying about serving God.”

“True enough. And what would happen to me then?”

“You might kill me, but you will ultimately lose.”

Buck had nothing to lose. “It’s all been foretold. God wins.”

By “God wins,” Buck means that God will ultimately kill all of God’s enemies really really hard, sparing only God’s servants — meaning those who know that the killing of God’s enemies has been foretold and is inevitable and who have, therefore, begged not to be killed.

When that’s what you think of as the “gospel,” then I think you’ve become one of the wrong people looking for the wrong person.

Michael, though, recognizes this fatalistic, bloody, vindictive gospel as the same message preached by his friend Tsion, so he says:

“If that’s true, and I turn out to be your brother, you can tell me your real name.” Buck hesitated. “If it turns out that I am your enemy,” Michael continued, “I’ll kill you anyway.”

Buck couldn’t argue with that. “My name is Cameron Williams. I am a friend of Dr. Ben-Judah.”

But Michael still isn’t quite satisfied. He has one final quiz question for Buck, and this one is fill-in-the-blanks:

“Quickly list for me six prophecies of Messiah that were fulfilled in Jesus Christ, according to the witnesses who preach at the Wailing Wall.”

Buck breathed a huge sigh of relief and smiled. “Michael, you are my brother in Christ. All the prophecies of the Messiah were fulfilled in Jesus Christ. I can tell you six that have to do with your culture alone. He would be a descendant of Abraham, a descendant of Isaac, a descendant of Jacob, from the tribe of Judah, heir to the throne of David, and born in Bethlehem.”

I can’t award Buck full credit for this. Michael demanded six fulfilled prophecies and Buck’s answer really boils down to only two. Any “heir to the throne of David,” must be from the tribe of Judah and must therefore also be a descendant of Abraham, Isaac and Jacob, so really Buck is just trying to pad one answer out to make it sound like five.

It’s also about the least impressive, least meaningful “prophecy” imaginable. “Heir to the throne of David” sounds significant until you do the math. We don’t need the (conflicting) genealogies of the New Testament Gospels to know that Jesus of Nazareth could claim King David as an ancestor, all we need to know is that Jesus was born about 1,000 years after David. Jesus was descended from David, but in all likelihood so was every other Jew and nearly every Gentile living in Palestine at the time of Jesus’ birth.

We should note the weirdness of Buck’s claim that he’s selecting six prophecies “that have to do with your culture.” He’s talking about alleged prophecies of a Jewish Messiah — they all, by definition, have to do with Jewish culture. The whole point of this claim is that Jesus fulfilled prophecies listed in what the authors call the Old Testament.

That’s not necessarily really the case. Many of the “Old Testament” prophecies fulfilled in the New Testament accounts of Jesus actually seem to have originated in the New Testament. They involve some very creative reinterpretations and reimaginings of the earlier texts. This is a fascinating area of study — the creative, innovative use of the Old Testament by the writers of the New Testament. In some cases, this is profound and insightful — such as with the “suffering servant” passages in Isaiah. In other cases, though, it seems like either a confused misreading or, at best, an overly strained exegesis (see, for example, the way the Gospel of Matthew rewrites Hosea 11:1-5 to appropriate it as a prophecy about Jesus).

In any case, Michael is satisfied by Buck’s answer:

The weapon rattled as Michael lay it on the deck and reached to embrace Buck. He squeezed him with a huge bear hug and was laughing and weeping.

And so their impossible journey up the impassible river can continue at last.

No time to think about what...
slacktivist
Related posts from slacktivist