1. And this, kids, is why you should never hitchhike: “Right-wing truckers’ group backs ‘libtard’-hating police chief.” See, 99 percent of all truck-drivers are probably nice people who will hospitably offer a ride and friendly conversation. But then there’s that other 1 percent …

2. Here’s a right-wing example of a nonpartisan phenomenon. Bring together a bunch of people convinced that they are the purest devotees of the purest truth and eventually they’ll start questioning the purity of one another. Extremists don’t play well with others.

3. “The Ghost Rapes of Bolivia.” (TW) This is an appalling, very disturbing story, but a remarkable piece of writing and reporting by Jean Friedman-Rudovsky.

4. Misogynist trolls terrified by confident women aren’t likely to listen to Amanda Marcotte. That’s a shame, because the advice she gives them — “Your Repulsive Personality Is Not Inevitable” — would actually help them to overcome the desperate sense of loneliness and rejection that has them seething with resentment.

As a public service, some bro-friendly site should republish Marcotte’s personal improvement tips under the byline of some “Alpha” male they’ll respect enough to pay attention to. They’ve got nothing to lose but their repulsiveness and their self-inflicted misery.

5. Wife-beaters and other abusers cheer for the GOP government shutdown.

6. Bravo to all involved with #AddaWordRuinaChristianBook. (From the World’s Worst Books, I’d go with these: Soul Train Harvest and The Skid Mark.) 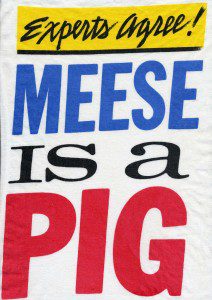 Out of that session, held one morning in a location the members insist on keeping secret, came a little-noticed “blueprint to defunding Obamacare,” signed by Mr. Meese and leaders of more than three dozen conservative groups.

It articulated a take-no-prisoners legislative strategy that had long percolated in conservative circles: that Republicans could derail the health care overhaul if conservative lawmakers were willing to push fellow Republicans — including their cautious leaders — into cutting off financing for the entire federal government.

… To many Americans, the shutdown came out of nowhere. But interviews with a wide array of conservatives show that the confrontation that precipitated the crisis was the outgrowth of a long-running effort to undo the law, the Affordable Care Act, since its passage in 2010 — waged by a galaxy of conservative groups with more money, organized tactics and interconnections than is commonly known.

The article includes a lot of boasting and credit-taking for the long-term planning and execution of this strategy — a strategy that depends, in part, on the ability to pretend there was no long-term planning and strategizing involved, nor credit to be taken, because this was all the other guy’s fault. So on the one hand, the current GOP talking point is that they didn’t want a shutdown and that it’s all Obama’s fault that it’s come to this despite their best efforts, and on the other hand you’ve got Republican strategists, consultants and advocacy groups shouldering each other out of the way so they can brag about their role in orchestrating this to a couple of reporters from The New York Times.