What’s that? Your church doesn’t have a food pantry? Then start one. Go visit the Episcopalians or PCUSA or United Methodists, they can show you how — those “mainline” Protestant types are good at this sort of thing. (Ask them about Crop Walks, too, and about Church World Service, while you’re there.)

Habitat for Humanity is amazing. There’s probably a local affiliate near you, and if you give them money, they’ll put it to very good use helping families translate work into homeownership. You should volunteer with them some time, too. Doesn’t matter if you don’t know which end of a hammer is which — Habitat is really great at putting even those of us without skills to productive use at their building sites.

Are you a college graduate who hasn’t yet forgotten everything you learned in college? Then ask around about after-school tutoring programs for low-income kids in your area. Give them a call and go volunteer as a tutor. You’ll meet some incredible kids, and even though the woman who runs the program seems a bit prickly and intimidating at first, you’ll soon be in awe of her zeal and devotion and ingenious knack for getting stuff done. You’ll eventually realize it’s inspiring just to breathe the same air as a person like that.

All of which is to say that private charities are impressive, essential and effective. They should be celebrated and supported.

And they should be listened to. They’ve earned that right.

So whenever someone has the gall or the ignorance or the cruelty to suggest that public efforts and the government safety net should be eliminated and replaced with private charity, that person should be forced to go and talk to the people actually working for actual private charities. They should be forced to go an look into the face of the local food bank’s director to see the look of despair there as they contemplate the impossibility of serving the people they serve if there wasn’t also SNAP (“food stamps”) and WIC and SSI and TANF. They should be forced to endure the sermon from the Habitat director — the mix of scripture and story as they describe how much more difficult their good work would be in a world without HUD and Section-8 and all the rest.

And in extreme cases, they should even be invited to go and talk to that amazing woman at the after-school tutoring program. If they’re brave enough, or stupid enough, they can try to explain to her their ideas about cutting funding for public education. But I’d suggest having medical personnel standing by, because the withering side-eye she’ll give them might just be lethal.

If you like private charity, then you shouldn’t be trying to destroy it. And let’s be clear: Eliminating or drastically cutting government safety net programs would create a tsunami of need that could overwhelm and destroy local private charities. Here again is Christine Meléndez Ashley, writing for Bread for the World about House Republicans’ proposed cuts to SNAP:

If enacted, we estimate almost 4 million people would be taken off SNAP through changes to the program’s eligibility rules and work requirements. 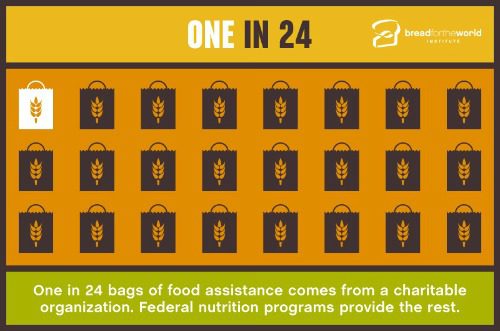 If you like the work being done by those private churches and charities — $4 billion in food assistance! — then listen to the people doing that work. They’re not able to do 24 times what they’re doing now. They haven’t got the capacity to do that — not just due to a lack of resources, but because their model does not scale up that much. In order for those private churches and charities to replace SNAP and to work on the scale it operates at, they would have to transform themselves into something identical to SNAP. So in the unlikely event that they were able to expand so dramatically, somehow surviving the flash-flood of overwhelming need that the elimination of government programs would entail, then they would be transformed into the very thing they were being called on to replace. Whatever it is that the critics think they prefer about “private charity” would go away, replaced by whatever it is that those critics now think they despise about the government programs.

“If we want a civilized society,” Debbie Chachra writes, “charities can’t fill the void left by government.” Chachra discusses how even the best private charities are, unavoidably by their very nature, ad hoc and inefficient:

Even excellent charities are inefficient. Take food banks. We have a distribution system that goes from farms to warehouses to grocery stores. Food banks then set up more warehouses and pick-up sites to get sustenance out to those in need, often food that’s already gone down the first chain. It’s far more efficient to give people the means to use the retail distribution network than to create and have them use an alternate system.

Charity is also ad hoc: it’s difficult to get help to people who need it in a systematic way that makes sure no one falls through the cracks. And charities, especially ones that do take on the challenge of large-scale issues, need to spend much of their income asking people like me to help.

… So, while I regularly donate to charities and I believe they play an important role in society, I don’t want them in lieu of more efficient systems. I don’t want to go to fundraisers to pay the medical bills of artists; I want them to have health insurance. … And I want programs like WIC to provide services that reduce the need for more expensive interventions.

… I donated to my local food bank in a crisis, but what I really want is for no one to need to use it, ever.

Let’s not dwell on how this Texas couple made their billions — that turns out to be depressing. Let’s just focus here on the enormity of this gift — $10 million is a huge donation. That’s the charitable equivalent of winning the lottery. It’s extraordinary, far better and far more than anyone who talks about private charity replacing government efforts could reasonably hope for on a regular basis.

And yet it’s only a drop in the bucket. That $10 million, it turns out, will keep only 7,000 poor children in school, and only through the end of October.

Ah, but the critics say, that’s only because of the waste, fraud and abuse of bureaucratic, wasteful, fraudulent and abusive Big Government. If that money weren’t being given to a Big Government program like Head Start, then that $10 million would go so much further.

Hogwash. This works out to about $1,400 per student, per month. Go ahead and try to replicate what Head Start provides for less than that. Cut away art and music and fancy supplies. Pare it down to a more streamlined, austere system. Farm it out to some religious order, maybe, where vows of poverty can be exploited to radically lower pay for teachers. Do all that and maybe — maybe — you can get that cost down to just $700 per student, per month. Congratulations, you’ve just kept the program going through November. So now you’ve got until Thanksgiving or so to win the lottery again by finding another billionaire willing to write you another $10 million check.

Private charities are impressive, essential and effective. They should be celebrated and supported. And they deserve to be listened to, not destroyed.

2017 Charlottesville Rally: "Jews Will Not Replace Us."...
Top journalists Bob Woodward and Robert Costas have written a book about...
view all Progressive Christian blogs
What Are Your Thoughts?leave a comment
Copyright 2008-2021, Patheos. All rights reserved.