Kevin Underhill at Lowering the Bar takes a look at one of those “inspirational fine art paintings” of Jesus in the workplace. The painting by Nathan Greene is called “The Senior Partner,” and it shows Jesus shaking hands with a couple of suits in a law office.

“Partners can usually get away with violating a dress code, as long as they aren’t being too outrageous,” Underhill writes. “This is especially true of senior partners, and if the senior partner in question is also the Savior, well, He could wear whatever He wants whenever He wants.”

This reminds me of a story from my days as a student at Timothy Christian High School back in Jersey. 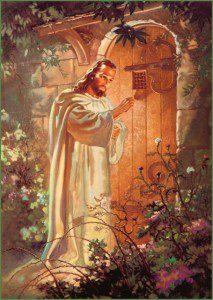 As a private, fundamentalist Christian school, Timothy didn’t just have a list of rules — it had a thick three-ring binder in which the ever-expanding list of rules, rules and more rules could be kept, indexed and updated. The dress code alone took several pages for girls and several more pages for boys. And it was vigilantly updated to ensure that any new fashion trend was quickly forbidden.

Leg-warmers, for instance. They were kind of a big deal for a while there in the early 1980s and were briefly permitted in our dress code. Defenders of leg-warmers argued that they were practical, warming the calves of female students in their three-fingers-below-the-knee dress-code skirts. Plus, they covered up even more of the girls’ treacherous flesh, so it was argued that they advanced the dress-code theme of “modesty.” Alas, though, leg-warmers were also associated with Olivia Newton John (worldly) and Jane Fonda (liberal), and that sealed their fate. The memo forbidding leg-warmers was sent out and added to the three-ring binders kept by teachers and staff.

My senior year brought another new rule involving our lockers. Some kids decorated their lockers with pictures of their favorite pop singers. By that I mean, of course, people like Amy Grant and David Meece. This was a problem because … well, I’m not really sure why it was a problem. But if kids were doing something that wasn’t specifically addressed by a specific rule in the rule book, that usually meant a new rule would be written. And so one was. The new rule said that students were henceforth forbidden to have pictures of people in their lockers.

There are two sides to every game, and we kids knew our role and we played it well. The previous year’s yearbook had a really nice picture of Mr. Smith, the high school administrator, sitting at his desk. Someone, maybe me, made and distributed 50 photocopies of that picture and soon they were hanging in lockers all over the high school.

Mr. Smith was a good sport. “All right, you rascals,” he said. You always knew you weren’t in serious trouble when he used the word “rascals.”

The next memo amended the new rule, replacing the previous memo in the binder. It said that henceforth students were forbidden to have pictures of any person hanging in their locker if that person was not attired according to Timothy’s dress code. That still ruled out Amy Grant (slacks!), but the yearbook photo of Mr. Smith was now permissible.

Our turn: Someone, maybe me, made and distributed 50 photocopies of “Christ at Heart’s Door,” by Warner Sallman, the famous “inspirational” painting pictured above. These pictures of Jesus were soon hanging in lockers all over the high school.

Jesus, you’ll notice, was not attired according to Timothy’s dress code. No collared shirt. No dress pants. No socks or dress shoes. And hair like that would’ve gotten you enough demerits for a week of detention.

That got us called “rascals” again, and Mr. Smith was smiling when he said it. And then, utterly contradicting the spirit of the rule book, he decided that pictures of Jesus in students’ lockers wasn’t something to write any new rules about and he just let it go. Well played, sir.

That round of the rule book game seemed pretty trivial at the time, but in retrospect I was learning a rascally lesson. These dress-code rules, it seemed, were culturally contingent and not — as we’d been led to believe — matters of intrinsic morality or of the “absolute truth” clearly spelled out for us in the King James English of the Word of God.

Anyway, back to Underhill. He notes that “inspirational” artwork is certainly a legitimate form of free expression, but that the message of “The Senior Partner” might not be something an employer would want to express in the workplace:

[Greene’s] website does go on to suggest that “[d]isplaying this piece prominently in your business will convey your Christian principles and values to your business associates, customers, and staff.” It certainly would do that, and depending on the business, it might also get you sued or at least serve as evidence if you get sued for religious discrimination. Replace the Savior’s image with one of Vishnu or Muhammad or whoever and imagine this hanging in your managing partner’s office, or in all the partners’ offices, and you might have a better sense of the problem.

Flip the script. That’s always good advice. If you want to know if something is wise or fair or advisable, imagine how it would seem to you if the shoe was on the other foot. “Do unto others as you would have them …” etc.

It’s troubling that American Christians have lost the habit of doing that, or even of understanding what Underhill is suggesting there. The kind of “Christian business” likely to hang such a painting in the workplace would be the first to cry “persecution” if anyone complained about it (or even if anyone failed to express sufficient enthusiasm about it). But if the business down the street hung Underhill’s hypothetical version of the painting showing Vishnu, well, they’d cry “persecution” over that too.

And if no one, anywhere, had any such paintings? That’d be “persecution” too.

November 2, 2013
2 years ago: All others pay cash: The Shepherd-Balkin Amendment
Next Post