That time when Abraham and God ate a non-kosher lunch

That time when Abraham and God ate a non-kosher lunch November 4, 2013 Fred Clark

Genesis 18, James Tabor writes, “has to be one of the most mysterious chapters in the entire Hebrew Bible.”

I remember this story, but I don’t remember it standing out as particularly mysterious. If you’d asked me to list a bunch of weird or mysterious passages from the Hebrew Bible, this wouldn’t have been on my list.

Until now. Because Tabor wins me over here with his discussion of the baffling strangeness of this chapter, “An Eating, Drinking, Walking, Talking ‘Jehovah.’”

Abraham encounters three men (Heb. אנשים) whom he hosts as honored visitors in good Middle Eastern style, washing their feet, giving them rest and shade, and fixing them a meal (meat and dairy combined – which I will ignore for now!).

That’s something I missed in all the times I’ve read this passage, but there it is, clear as day:

Abraham hastened into the tent to Sarah, and said, “Make ready quickly three measures of choice flour, knead it, and make cakes.” Abraham ran to the herd, and took a calf, tender and good, and gave it to the servant, who hastened to prepare it.Then he took curds and milk and the calf that he had prepared, and set it before them; and he stood by them under the tree while they ate.

Cheeseburgers, basically. Or maybe a cheesesteak. Delicious, but definitely not kosher.

That’s a bit startling, even though it shouldn’t be. The rules about kosher foods are part of the laws of Moses, and those laws wouldn’t be written until many generations after Abraham. So Abraham, Isaac and Jacob couldn’t have kept kosher. Nor would they have kept the Sabbath or any of the other holy days.

That’s easy to forget when reading the stories in the Bible that are set before the time of Moses — especially since the writers of those stories sometimes forgot this themselves. The song “All You Zombies” used to bug me when the verse about Noah and his family includes the line “They were the Israelites.” No, they were not. But eventually I decided to cut the Hooters some slack, because the writers of Genesis themselves were a bit mixed up on that point — referring to the “clean” and “unclean” animals Noah saved in his ark.

Still, though, considering how much weight the latter books of the Pentateuch put on maintaining dietary purity, it’s a bit jarring to be reminded that Abraham liked cheeseburgers so much that he served them to his honored guests.

And those guests — three angels, I was always taught, even though the passage itself doesn’t explicitly say that — also didn’t seem at all concerned about eating meat and dairy together. The angels themselves were unclean.

But Tabor says it’s wrong to regard these three men who visited Abraham as angels. What the text actually says, he argues, is far stranger than that:

They are further identified as “messengers” (Heb. מלאכים), sometimes poorly translated as “angels,” two of which then proceed on to the cities of Sodom and Gomorrah to investigate their wickedness and deliver Abraham’s nephew Lot and his family from the impending destruction (Genesis 19).

The fascinating thing about this whole scene is that one of these three men is clearly identified as YHVH (Heb. יהוה Yahweh or Jehovah) and he begins to speak back and forth directly with Abraham following the meal, promising to return to Abraham and Sarah the following year and resulting in Sarah – now well past menopause at age 90 – becoming pregnant with Isaac.

I’m not a Hebrew scholar, but I find Tabor’s case compelling. It gives a new perspective on the second half of Genesis 18, in which Abraham pleads with God, negotiating for mercy on behalf of Sodom. As many times as I’d read that story, I hadn’t included Abraham’s three visitors in my mental image of that negotiation. R. Crumb’s illustration of that scene was more accurate — more faithful to the text — than the misapprehension I’d maintained despite multiple readings: 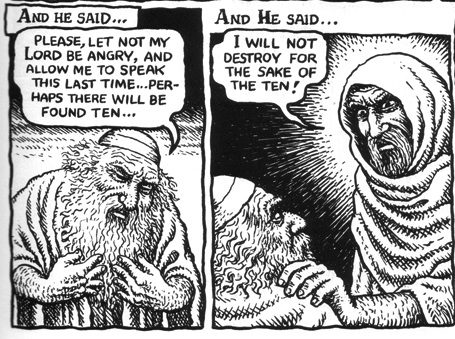 This is why I like biblioblogs, commentaries, Bible study groups and book clubs in general. We start to see a lot more when we read with more than one set of eyes.