• “The groom is nervous, he answers twice.”

• Too many fun James McGrath posts on Doctor Who to link to them separately, so just go here:

• The Doctor gets a gig waiting tables at the Olive Garden.

• Justin Welby, archbishop of Canterbury, on how Lambeth Palace is like Hogwarts:

The Welbys live in a part of the palace known as Cranmer’s Tower. Fans of Hilary Mantel’s Wolf Hall will recognise it as the setting for a supper between Archbishop Cranmer, Thomas More and Thomas Cromwell. “Absolutely! The first floor of that is where I have my study and the second floor and the third floor is part of the flat. So you’re just thinking ‘gosh, this is it!’ You’re very, very conscious of your predecessors, not least because every corridor is lined with portraits of dead archbishops. There’s an element of Hogwarts about it. You have a bad day and you’re wandering down the corridor in the evening in the gloom and you sort of hear them muttering to themselves ‘Ha! Don’t think much of this one!’”

• The Patheos-as-the-Borg joke (“Resistance is futile. You will be assimilated”). With pictures.

• James McGrath and vorjack discuss theological variations of the Kobayashi Maru. (I was repeatedly reminded of my geek-hood this summer listening to Phillies games. Every time rookie infielder Cody Asche stepped to the plate, my brain automatically went to “Cody Asche Maru.” Just me?) 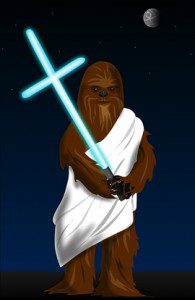 • Zack Hunt shared this, um, memorable image of a Wookie Jesus. To paraphrase Larry Norman, “If there’s life on Kashyyyk, then I’m sure that He must know.”

That’s from Norman’s lovely, but ridiculous, song “U.F.O.,” in which Larry suggests that Jesus must have been crucified on every planet to save the souls of every possible alien race. Zach Weiner ponders the same idea, but without slandering God as bloodthirsty and bound by the vengeful rules of substitutionary penal atonement.

• There’s a lot to disagree with in “The Women and the Thrones,” Daniel Mendelsohn’s epic-length essay on both Game of Thrones and A Song of Ice and Fire, in the New York Review of Books. But the key thing there is that Mendelsohn and the Review are giving Serious Literary People permission to take these stories seriously. The rest of us didn’t really need their permission to enjoy George R.R. Martin’s saga, but I suppose it’s nice that they’ve agreed to give one another permission to enjoy it as well.

• “You’re playing the most powerful game ever created!”

• “Is there any one cryptid that you wish was real?” “All of them.”

• “The Heilsgeschichte of Israel involves exodus and exile. The Christians added on death, resurrection, and ascension. Christopher Nolan put them together in one Dark Knight.”

• “See, there were these two guys in a lunatic asylum …”

• “Batman and Sons” (via Amethyst Marie) (Much nicer than this version.)

• “These billion-dollar ventures come down to 10 people or fewer in a room saying, ‘You know what would be cool?’”

• “That’s exactly what brought me to this park on a beautiful summer day. To make fresh neural connections in our collective consciousness. To leave a new image on the hard drive of that boy’s mind.”

• “It’s a shame because these men clearly are capable of thinking critically about genre if not about gender.”

• “The Men are From Box Office, Women Are From Tricky board game …”