Worth 1,000 words: The awful state of American evangelical Christianity after Billy Graham

This is a picture taken this week at the celebration Franklin Graham held for the 95th birthday of his father, Billy Graham. It is also a parable, a metaphor, an astonishingly revealing snapshot of the sorry state of evangelical Christianity in America in 2013. 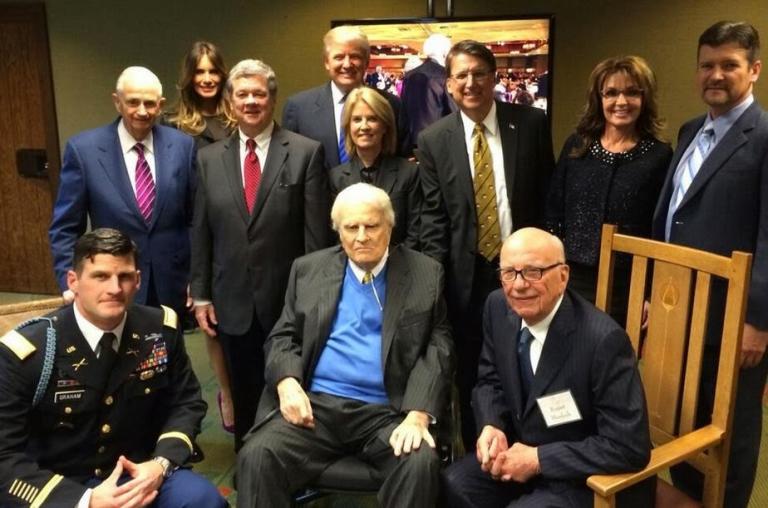 Seated in the middle there is Billy Graham, the world-famous evangelist who was, for more than 50 years, the face of white evangelical Christianity in America and the second-most influential Baptist pastor of the 20th century.

At 95, Graham is frail and in ill health. His image and his legacy have been usurped as political tools used by his son Franklin Graham, who seems desperate to be a political player and kingmaker. Not content with living off the interest of his father’s legacy, Franklin has been burning through the capital.

Just look at how Franklin has exploited his father here. The famous preacher is silent now, a voiceless prop called upon to lend a sheen of respectability to the likes of Donald Trump, Sarah Palin, and Rupert Murdoch and his Fox News lackeys.

To his credit, Billy Graham looks uncomfortable being dragged out to offer his apparent blessing to a gaggle of dishonest strangers and charlatans that includes two racist billionaires. The scowl on the old preacher’s face may reveal his recognition that this is what has become of his legacy — that everything he did and worked for has led only to this, to the empowerment of lying hucksters and the politics of resentful privilege. Perhaps he’s even realizing that something like this was bound to happen — that the intensely otherworldly focus of his lifelong ministry meant that it couldn’t plant deep roots in earthly soil.

But just look at that horrifying photograph. Soak it in.

This is evangelical Christianity in America in 2013.

It’s all about political tribalism. Jesus simply isn’t in the picture.

November 9, 2013
2 years ago: 'The moral rights corresponding to this obligation'
Next Post

November 10, 2013 7 years ago: The righteous
Recent Comments
39 Comments | Leave a Comment
"OT: over here in Brexitland, our glorious leader has survived for another day, after the ..."
Scurra Smart people saying smart things (5.19.22)
"As I probably said somewhere in that other thread, I was amused to learn that ..."
mattmcirvin May 19 Flashback: UAPs
"Yeah, "libertarian" carries a lot more baggage than just that. I suppose it's the inevitable ..."
Jim Roberts May 19 Flashback: UAPs
""Believes taxes should be as low as possible and business should be as unregulated as ..."
3lemenope May 19 Flashback: UAPs
Browse Our Archives
Related posts from slacktivist

Making Darkness and Silence your Friends
Hello darkness, my old friend, I’ve come to talk to you again. “The...
view all Progressive Christian blogs
What Are Your Thoughts?leave a comment
Copyright 2008-2021, Patheos. All rights reserved.