‘Heaven Is for Real’ is not for real

So here are a couple of new movie trailers for a couple of religiously themed upcoming films.

And second, the trailer for Heaven Is for Real, Randall Wallace’s adaptation of the (not at all) “true story” from Todd Burpo’s best-seller about a young boy’s supposed visit to the undiscovered country, which inexplicably features Greg Kinnear, Margo Martindale and Thomas Haden Church:

The screwy, backwards thing about these two movies is that white evangelicals are probably going to be upset by the wrong one.

The story of Noah in the book of Genesis is sketched out in very broad strokes in about 2,250 words. To turn that into a feature-length film, then, Aronofsky will need to flesh out lots of details never discussed in Genesis. The movie apparently also incorporates some of the trippier aspects of this story from the apocryphal Book of Enoch — angelic “watchers,” Nephilim, etc. I’m happy about that — Enoch lends itself to the talents of an unwieldy visionary like Aronofsky.

The problem facing Noah, the movie, is that unlike the book of Genesis itself, lots of American Christians treat this story as a historical account. For people who think the story of Noah is “history,” any addition to or deviation from the 2,250 words of the English translation of Genesis will be viewed negatively. That probably won’t be expressed as a mere difference of artistic opinion. The white evangelicals who will be upset by this movie won’t be saying things like, “I didn’t agree with Aronofsky’s decision to explore …” but will likely, rather, be saying things like, “Aronofsky is attacking the Bible because he hates Jesus. We’re being persecuted and oppressed. Religious liberty!” 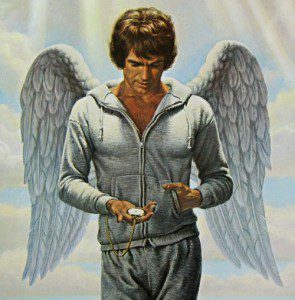 I will be happy if it turns out I’m wrong about that prediction, but I’ve seen this pattern before and I’d be surprised if it doesn’t repeat itself with Noah.

The Christians who I expect will get upset about Noah ought to be upset by Heaven Is for Real. This is execrable theology. It’s biblically indefensible, inane and heretical.

And yet I suspect that white evangelicals won’t be upset with Heaven Is for Real. I suspect they’ll eat it up.

It’s theology may be horrifically anti-biblical, but it’s got the two essential things that American white evangelicals are looking for: gormless piety and sentimental anti-abortionism.

I don’t mind stories that include fantasy elements that would make for terrible theology if we took them seriously. The angel Clarence in It’s a Wonderful Life and the whole business about him earning his wings is pure pudding. It doesn’t make much sense, but the little sense that can be made of it amounts to awful theology. But that’s not the point of that story, it’s just a device to move the plot forward, and it serves that purpose well enough. Heaven Can Wait is terrific fun, but it would be terrible theology if you treated it as a treatise on the afterlife.

The nasty bit about Heaven Is for Real is that it insists that the fantasy elements of this story are “true” — that this is a story that really happened and that this is “for real,” what “Heaven” is all about.

That means we can’t simply respond to this story as a story. It means we have to respond to this lie as a lie — as a mawkish, melodramatic, manipulative, sappy, shallow, schmaltzy, anti-biblical, anti-rational lie.

Christians who care about Christianity ought to be upset about a lie like that. But they won’t be, because this lie is embedded in a movie festooned with all the tribal signifiers that delight white evangelicals — praying firefighters, miracles that prove scientists are stupid, talking embryos in Heaven, etc. Include enough of the totems and talismans of their tribe, and white evangelicals will embrace this movie as their own.