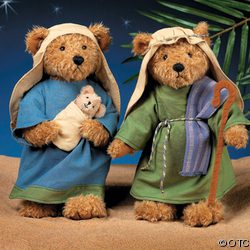 Take it from someone who helped run many a 5-Day Club as a teenager — CEF is, in fact, religious. It is pervasively sectarian — “a Bible-centered, worldwide organization that is dedicated to seeing every child reached with the Gospel of the Lord Jesus Christ, discipled and established in a local church” — and has no business being funded by a county council or any other level of government. It says so, clearly, on every page of the Wordless Book.

McCune eventually withdrew his proposed grant to the evangelistic group. Well, to one such group, anyway. It turns out the council also budgeted a $15,000 grant for Young Life — a group that defines its mission as “introducing adolescents to Jesus Christ and helping them grow in their faith.” (And which does so by validating, exploiting and imitating the evil social stratification of high school.)

3. Joanna Harader points us to some fine collections of Christmas kitsch, including “the 50 worst and weirdest nativity sets” from Mark Oestreicher, and Going Jesus, which features several delightfully awful collections.

4. Ericka Sackin wrote these tips in preparation for Thanksgiving, but they’re just as helpful when it comes to Christmas gatherings: “Talking Turkey: Eight Easy Steps for Discussing Reproductive Health and Justice at the Holiday Table.”

6. Jon Stewart’s response to millionaires opposed to a living wage is a must-see:

The astonishing thing to me in that business from Stuart Varney is his claim that workers do not “deserve” to earn more than $7.25/hour — not because they don’t work hard, but because they don’t have the “proper” background and education. For Varney, wages aren’t paid for the work that one does, but are allocated according to pedigree. Paychecks, he believes, are a recognition of good breeding, not compensation for performance.

For Varney, those people should not receive a living wage because those people — no matter how hard they work, or how long, or how well — are intrinsically undeserving. Just … wow.

7. It’s almost Christmas. It’s almost Solstice. Here’s Dar Williams singing about both in one of the songs that gets to me every December: