The link here is to WorldNet Daily, so be warned, but here’s conservative columnist Dennis Prager saying something that isn’t true:

No religion practiced in America –€“ indeed, no world religion –€“ has ever banned interracial marriage.

Here’s a counterpoint, from the 10th chapter of Ezra, in the Bible:

While Ezra prayed and made confession, weeping and throwing himself down before the house of God, a very great assembly of men, women, and children gathered to him out of Israel; the people also wept bitterly. Shecaniah son of Jehiel, of the descendants of Elam, addressed Ezra, saying, “We have broken faith with our God and have married foreign women from the peoples of the land, but even now there is hope for Israel in spite of this. So now let us make a covenant with our God to send away all these wives and their children, according to the counsel of my lord and of those who tremble at the commandment of our God; and let it be done according to the law. Take action, for it is your duty, and we are with you; be strong, and do it.” 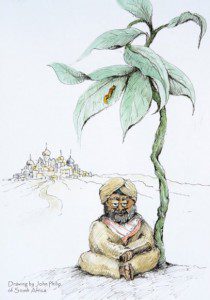 Then Ezra stood up and made the leading priests, the Levites, and all Israel swear that they would do as had been said. So they swore.

Then Ezra withdrew from before the house of God, and went to the chamber of Jehohanan son of Eliashib, where he spent the night. He did not eat bread or drink water, for he was mourning over the faithlessness of the exiles. They made a proclamation throughout Judah and Jerusalem to all the returned exiles that they should assemble at Jerusalem, and that if any did not come within three days, by order of the officials and the elders all their property should be forfeited, and they themselves banned from the congregation of the exiles.

Then all the people of Judah and Benjamin assembled at Jerusalem within the three days; it was the ninth month, on the twentieth day of the month. All the people sat in the open square before the house of God, trembling because of this matter and because of the heavy rain. Then Ezra the priest stood up and said to them, “You have trespassed and married foreign women, and so increased the guilt of Israel. Now make confession to the Lord the God of your ancestors, and do his will; separate yourselves from the peoples of the land and from the foreign wives.”

Then all the assembly answered with a loud voice, “€œIt is so; we must do as you have said.”

One could argue that the mass-divorce and expulsion commanded by Ezra isn’t really a condemnation of interracial marriage, per se, but of intermarriage with people of other faiths. The reason that the final chapters of Ezra rail against the evil foreignness of evil foreigners isn’t because of their ethnicity, but because of their religion. Such a distinction is arguable, I suppose, even if Ezra himself didn’t make it or allow for it. (The evil foreigners he commanded the people to divorce weren’t given the option of conversion, they were simply to be sent away.)

Does this mean “the Bible condemns interracial marriage”?

For these folks, “What does the Bible say about X?” is answered by searching out the passages that mention X and citing each of them as an authoritative, definitive statement answering that question. You know — clobber texts.

The premise of this practice is that the Bible is uniform and univocal. Every chapter and every verse is equally authoritative, and so they all must agree as part of a single, singular, consistent voice. The Bible cannot contradict itself, and so therefore any one verse speaks with the authority of the whole and to dismiss any one verse or passage is to dismiss the whole.

The alternative, of course, is to recognize that the Bible is a library — a collection of books, many of which are themselves anthologies collecting scores of other works — and that this library of texts contains a great diversity of opinions. The Bible presents us with arguments and disagreements — sometimes fierce disagreements between wholly incompatible ideas.

One of the biggest such disagreements is the heated argument that pervades much of the Bible between what I call Team Jonah and Team Book of Jonah. For Team Jonah, God’s plan of salvation is for the chosen few — the righteous elect. Ninevites and Pagan sailors need not apply. God picked Abraham and rejects everyone else. You can find this view presented, asserted and defended in a host of passages throughout the Bible.

But you can also find this view attacked, rebuffed and rebutted in a host of passages throughout the Bible. The book of Jonah is a polemic against this view. It was written to mock this view — to ridicule it as a ridiculous distortion of God and of our calling to follow God. Like many passages in the Bible, the book of Jonah argues that God’s plan of salvation is breathtakingly inclusive. Abraham was chosen by God, yes, but he was chosen by God as a vehicle to bring salvation to the whole world. For God so loved the cosmos.

Once you recognize and accept the presence of this argument throughout the Bible, you also come to see why the clobber-texting approach of the so-called conservatives doesn’t work. You come to see how the hunt-and-peck concordance word-study approach of the proof-texters is a lousy way to determine “What does the Bible say about X?”

Apply that approach to the question of interracial marriage and you’ll come across passages like the one above from the book of Ezra, which is something of a manifesto of Team Jonah. If you reject the reality of the Bible’s diversity and if you reject the idea that the Bible contains arguments, then you’re forced to regard such texts as authoritative and binding. “Separate yourselves from … foreign wives” becomes a religious command and a religious duty. Clobber-texters always wind up on Team Jonah, which is why, like Jonah himself, they always seem so perturbed.

The so-called conservatives tend to complain at this point that those of us who recognize and accept the diversity of the Bible are just picking and choosing the parts of the Bible that we like and ignoring the other parts. That complaint is quite a concession — an admission that we’re right about the diversity of the scriptures, because we wouldn’t be able to do what they’re accusing us of unless the Bible does, in fact, contain such an array of diverse perspectives. But set that aside. Is that really what I’m suggesting? No. I don’t ignore the parts of the Bible that make the case for Team Jonah, I contend with them — I contend against them. Yes, it is true that there are parts of the Bible I don’t like, so I dislike them. Actively.

Given that the diversity of the Bible is a fact, this is the only honest approach. The long argument between Team Jonah and Team Book of Jonah presents two incompatible sides. I’m picking sides. I’m siding with one side of the argument against the other side. Anyone who thinks that constitutes dismissing or ignoring the other side doesn’t understand what the word “argument” means.

December 28, 2013
2 years ago: Subsidiarity and the outline of your next novel
Next Post

December 29, 2013 10 years ago: Preying on suckers
Recent Comments
0 | Leave a Comment
Browse Our Archives
get the latest from
slacktivist
Sign up for our newsletter
POPULAR AT PATHEOS Progressive Christian
1