The problem with American Christianity, according to Franklin Graham, is that it’s not sufficiently homophobic, misogynist and racist:

I have been amazed at how many churches have apparently “ducked” out on the issue (sin). Some were even quick to condemn Phil Robertson.

If we Christians banded together and took a stand, perhaps we wouldn’t be losing so much ground in what the media is calling the “cultural war.” However, it is not a cultural war — it is a religious war against Christians and the biblical truths we stand for. Some churches have fallen into the trap of being politically correct, under the disguise of tolerance.

God is not “politically correct,” and He is certainly not tolerant of sin.

Franklin’s screed on New Year’s Day shows at least three big differences between him and his father — and between the white evangelical subculture of 2014 and the now-fading generation of white evangelicalism once represented by Billy Graham. 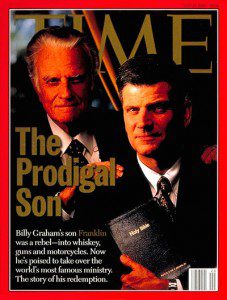 1. For Billy — back when he spoke for himself — the culture wars of the religious right were something to avoid lest they distract from the evangelistic outreach of his “crusades.” For Franklin, the culture wars are the crusade — literally so, as a “religious war” that Christians must win.

2. Billy Graham was never a hipster, but he was cognizant of the wider culture and able to speak to it. He’d at least read some reviews of James Davison Hunter’s Culture Wars, and was familiar enough with the larger conversation not to sound like a bewildered foreign visitor, like Franklin does when he speaks of “what the media is calling the ‘cultural war.'” And Billy seemed to realize that railing against “political correctness” in the 21st-century served only to make one sound like a proud jerk who hadn’t updated his pop-culture references in 20 years.

3. Billy Graham founded Christianity Today as a voice for what he thought of as a “middle of the road,” mainstream of white evangelicalism. “I did not want our magazine to be divisive,” he wrote. That’s why Franklin Graham does not and cannot write for his father’s magazine. Franklin’s Duck Dynasty screed wasn’t published by CT, but by Charisma — the right-wing culture-war tabloid published by Steven Strang.

And I suppose Franklin’s New Years Day screed shows one more big difference between him and his father. Billy Graham had a knack for discerning the cultural moment and responding accordingly. Franklin just has lousy timing.

Franklin’s blanket defense of Phil Robertson as an emblem of righteousness was published, he said “as the Robertson controversy winds down.” Except it wasn’t winding down. The controversy had instead widened beyond Robertson’s anti-gay, anti-woman and pro-Jim Crow comments in one GQ magazine profile to include also some of Robertson’s other appalling public statements, including this:

Good and godly wives are “gettin’ hard to find,” Phil Robertson says in the video above:

Mainly because these boys are waitin’ ’til they get to be about 20 years old before they marry ’em. … You got to marry these girls when they’re about 15 or 16.

And Franklin Graham endorsed Robertson after that.

So, OK then. Phil Robertson is a creepy old man who preaches white supremacist myths defending segregation, preaches Bartonian lies endorsing sectarian government, endorses child marriage as a way of disallowing independent adulthood to women, refers to his own wife as “a vagina,” equates being gay with bestiality and terrorism, and says that all Muslims and “Shintos” are “under control of the Evil One.”

And Franklin Graham says it’s wrong for Christians to condemn those views. Instead, Graham says, it is our Christian duty to rally around those views because these are “the biblical truths we stand for.”

And millions of white evangelicals say “amen.” Christ have mercy.