In an interview last September with an Italian Jesuit magazine, Pope Francis said:

Great changes in history were realized when reality was seen not from the center but rather from the periphery. It is a hermeneutical question: reality is understood only when it is looked at from the periphery, and not when our viewpoint is equidistant from everything. Truly to understand reality we need to move away from the central position of calmness and peacefulness and direct ourselves to the peripheral areas. Being at the periphery helps to see and to understand better, to analyze reality more correctly, to shun centralism and ideological approaches.

It is not a good strategy to be at the center of a sphere. To understand we ought to move around, to see reality from various viewpoints. …

But of course, as Claire Bangasser says, there are “many peripheries,” and Francis did not seem to have all of them in mind when commending that we try to see the world from their perspective. The new pope, like his predecessors, seems determined to keep some of those perspectives from the periphery as peripheral as possible. 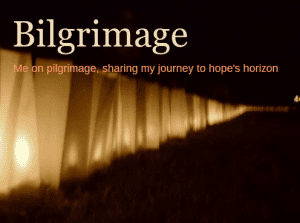 That’s a shame. He’s missing out on some really good stuff — some of the perspectives he needs “truly to understand reality.”

Consider, for example, the blog and the blogger I’m recommending to you today: Bilgrimage, by William Lindsey. Lindsey writes from several different peripheries. He’s a Catholic in Southern Baptist Arkansas. He’s a theologian in a church where theologians are often suspect. And he’s gay — which in both Arkansas and the Catholic church is pretty darned peripheral.

What I like best about Bilgrimage, though, is that Lindsey doesn’t just consider the perspective from his own peripheries. His own peripheral status, rather, has led him to seek out, engage and amplify the voices of others from other peripheries, other margins, other otherings.

There’s wisdom and virtue in that seeking out of other voices, but also too — at a more practical, selfish level for me as a reader — it makes Lindsey a better blogger as well as a better theologian. It means he’s often ferreting out and lifting up voices, people, ideas and perspectives that I might never encounter otherwise. He may quote or link to them directly in one of his regular round-up posts, and he’ll also allow their views to inform his own.

Part of what that means, too, is that when he writes in anger, it never seems to be anger solely, or even mostly, on his own behalf. He’s not fueled by resentment of those who would push him away, further out into the periphery, but by solidarity with the others he has met out there.

Francis was not wrong to insist that such solidarity with the marginalized is “a hermeneutical question” and a way “to see and to understand better.” He could learn a thing or two about what that looks like from people like William Lindsey.

In other words, I’m hoping that Pope Francis will start reading Bilgrimage. And I’m hoping you’ll check it out too.