And this is potentially even better news: “Sen. Elizabeth Warren Proposes Replacing Payday Lenders With the Post Office”

“USPS could partner with banks to make a critical difference for millions of Americans who don’t have basic banking services because there are almost no banks or bank branches in their neighborhoods,” Warren wrote in a Huffington Post op-ed on Saturday. The op-ed picked up on a report from the USPS’s Inspector General that proposed using the agency’s extensive physical infrastructure to extend basics like debit cards and small-dollar loans to the same communities that the banking industry has generally ignored. The report found that 68 million Americans don’t have bank accounts and spent $89 billion in 2012 on interest and fees for the kinds of basic financial services that USPS could begin offering. The average un-banked household spent more than $2,400, or about 10 percent of its income, just to access its own money through things like check cashing and payday lending stores. USPS would generate savings for those families and revenue for itself by stepping in to replace those non-bank financial services companies.

2. “The Wall Street Journal concedes that it might have been ‘unfortunate that Perkins compared the treatment of the rich in America to the treatment of Jews in Nazi Germany. But they’re certain that he was right about class warfare and how difficult it is to be a plutocrat today … even if it might not be quite as bad as what the Jews faced under Hitler.” 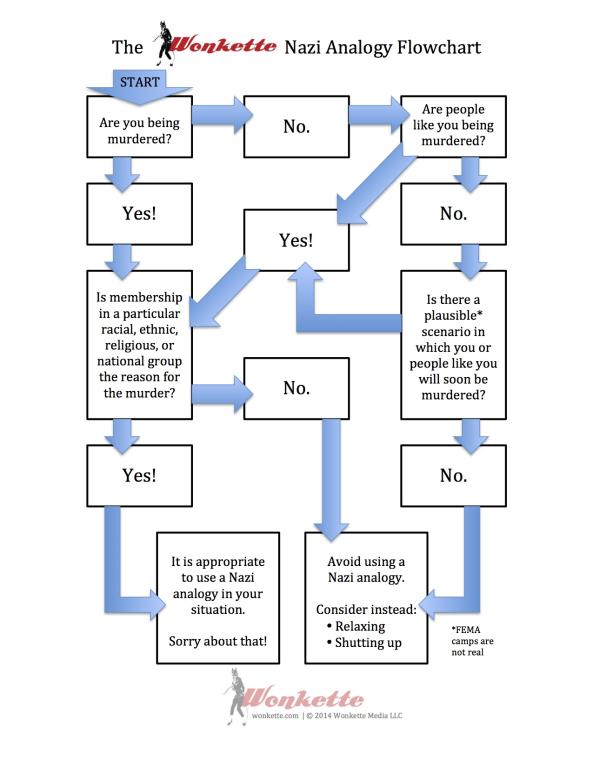 3. “If one group of people thinks making it easier and cheaper to gain access to IUDs is the best way to reduce the need for abortions, and another thinks IUD use threatens a great Holocaust of baby-killing, they are going to have a bit of trouble finding common ground, eh?”

4. “19 things conservatives insist on comparing to slavery.” Or, as Adam Serwer put it, “Everything is like slavery, except for slavery, which wasn’t that bad and definitely didn’t cause the Civil War.”

6. Jay Lake on “What I believe about what you believe“:

No religion is safe when any religion can dictate public policy, law and education. It’s that simple. Hence my dictum that freedom of religion means freedom from religion.

When I say that, it is not a call for deconversion. It’s a call for a secular state where all faith is equally protected, and no faith at all is just as protected.

February 4, 2014 Eve is 'under the Curse,' but Adam is blessed
Recent Comments
0 | Leave a Comment
Browse Our Archives
Related posts from slacktivist