This is interesting: Erez Ben-Yosef and Lidar Sapir-Hen, researchers from Tel-Aviv University, have pin-pointed the introduction of domesticated camels into ancient Israel. Well, “pin-pointed” in archaeological terms — meaning they’ve got it narrowed down to within decades, which is about as pin-point-y as you can hope to get for something that happened thousands of years ago:

The researchers examined ancient copper smelting sites in the Arava Valley, in southern Israel, and discovered that “camel bones were unearthed almost exclusively in archaeological layers dating from the last third of the 10th century BCE or later,” and that “all the sites active in the 9th century in the Arava Valley had camel bones, but none of the sites that were active earlier contained them.”

“The introduction of the camel to our region was a very important economic and social development. By analyzing archaeological evidence from the copper production sites of the Arava Valley, we were able to estimate the date of this event in terms of decades rather than centuries,” said Ben-Yosef.

The headline-grabbing aspect of this story comes due to the presence of domesticated camels in lots of biblical stories — stories that are set long before “the last third of the 10th century BCE.” Evidence that there were no such camels in Israel at that time, Tel Aviv University says, is “is direct proof that the [Biblical] text was compiled well after the events it describes.” 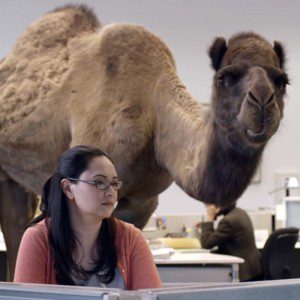 Well, it’s big news for anyone who’s never read the Bible before, I guess.

Those who have read their Bibles aren’t surprised by this at all. It’s not like we didn’t already have gobs of “direct proof that the biblical text was compiled well after the events it describes.” We now know that the many camels the Bible says were owned by folks like Abraham and Job are anachronisms. So let’s add them to the list — the long list — of biblical anachronisms we already knew about.

Think of Cain’s grandson the craftsman, Tubal-Cain, who supposedly crafted iron tools eons before the Iron Age. Or the many places in Genesis where everyone presumes to know all about the laws of Moses — the “clean and unclean” animals on Noah’s ark, for example — even though Moses hasn’t yet come down from Sinai on account of not being born yet.

So this new research narrowing down the introduction of domesticated camels in Israel — and confirming it as another biblical anachronism — is interesting, but not earth-shattering.

And that means, above all else, rejecting anything — no matter how real — that doesn’t conform to one’s preconceived notions of what the Bible says.

What’s really interesting about this worldview of the foot-stamping denialists is how it distorts their perception not just of the world, but of the text they claim to revere. I suggested above that biblical anachronism could only be news to someone who had never read the Bible, but let me qualify that. It is only news to someone who has never read the Bible with their eyes open. Al Mohler reads the Bible as he wants to see it, and that renders an awful lot of the text invisible to him.

I can relate to that. That’s how I was taught to read the Bible, too, when I went to a fundamentalist Baptist church and a fundie private Christian school. Our church youth group urged us to read the Bible and I did — I read it cover to cover, over and over, every day. Yet if you asked me about the kingdom of God, or about justice and Jubilee, or about what it says regarding poverty and wealth, I couldn’t even begin to have answered you. I had read those words — those many tens of thousands of words — and yet none of it registered somehow. That’s weird. Even stranger, teenage me was convinced that a lot of the Bible had to do with avoiding Hell and masturbation (not necessarily in that order) even though neither of those is actually a biblical concern. Weird.

The thing about foot-stamping denialism is that it’s a mechanism for defending against facts. And that means it can’t be corrected with facts.

Apostles of FSD, like Al Mohler, will never accept Tel Aviv’s research findings, no matter how many ancient camel bones can or cannot be found. It’s not about archaeology or history or camels or facts. It’s about the Bible says. And it’s about fear.

For Mohler, the Bible says that Abraham had camels. Take away those camels and you might as well take away Abraham, and take away God’s promise to redeem the world through the calling of Abraham. Take away any one piece and the whole thing crumbles and then life is meaningless and death wins and that’s the last word.

Here’s what I wrote about that a few years back. It’s still true:

The real problem with Answers in Genesis can’t be found in Genesis, or in their tortured reading of it. The real problem is that they’ve somehow become convinced that there exist two and only two possibilities. Either their particular, smallish reading of Genesis is “literally” true and the world was created in six, 24-hour days about 6,000 years ago by their particular, smallish notion of god, or else the universe and human existence within it are meaningless, a realm violence and death in which kindness, goodness, justice and beauty are nothing more than illusion. They believe that either the history of the universe is a brutally short 6,000 years, or else life in that universe is nasty, brutish and short and nothing but. They prefer the former, understandably. And any challenge to it — by argument or by exposure to science or reality — is thus interpreted as an affirmation of the latter view.

You’ll never get anywhere talking to these folks unless you confront that fundamental error. Their hostility to science and their appalling theology are big problems — unsustainably life-distorting problems — but they both derive from this deeper mistake. If you can’t get them to accept that their fundamental false dichotomy is, in fact, false — that they are not forced to choose either impossible antiscience or cruel nihilism — then they will never be able to consider any other possibilities.

February 6, 2014 Powerlessness (not that kind) and collapsing the transcendent into the immanent
Recent Comments
0 | Leave a Comment
Browse Our Archives
get the latest updates from
slacktivist
and the Patheos
Progressive Christian
Channel
POPULAR AT PATHEOS Progressive Christian
1