Postcards from the culture wars (2.26)

“Hundreds of Lebanese took to the streets of the northern city of Tripoli on Saturday to protest the torching of a decades-old library owned by a Greek Orthodox priest.”

“What could possibly go wrong with training up an elite religious paramilitary opposed to minority religions that engage in magic?”

“This comes from someone who loves Israel with all of his heart and they know that I’ve chaired the Israel allies caucus here for years and let me just say to you no one loves Israel more than I do.”

“The US Army conducted field experiments of biological weapons, which could harm rice cropping, in the Japanese island of Okinawa in the early 1960s.” 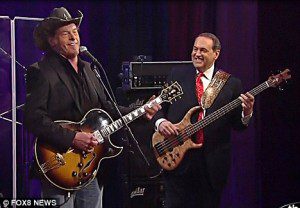 “One major difference that jumps out when you compare them is the huge amount of torture that happens in Fringe compared to the X-Files.”

“Rutherford County (Tenn.) has spent $343,276 fighting a lawsuit brought by plaintiffs upset that the county approved construction plans for a mosque.”

“This time, Delgaudio, we can’t lose!”

“There Are Two Christian Right Movies Called ‘Persecuted’ Coming Out This Year.”

“I think we got off the track when we allowed our government to become a secular government, when we stopped realizing that God created this nation, that He wrote the Constitution, that it’s based on biblical principles.”

“The first president to say it was Richard Nixon, who dropped the phrase during an attempt at damage control for the burgeoning Watergate scandal on April 30, 1973.”

“Till selfish gain no longer stain / The banner of the free.”

“I was the one who was victimized.”

“Persons expressing surprise at this basic fact of American life are advised to pay closer attention.”

“Don’t call 911. Obviously, there are exceptions, but the sad lesson is, there are fewer than you’d think.”

“Apparently Abbott is betting that gun rights trump sexual morality, even among the Christian evangelicals he counts among his core constituency.”

“The dinosaurs seemed to get along quite well with that amount of carbon dioxide.”

“The crazy letters are coming from inside the House.”

“You can’t alter human nature by pretending it doesn’t exist.”