The only Muslims in Carnot who have not been killed by Christians March 22, 2014 Fred Clark

Tim Whewell of the BBC reports from the Central African Republic, where “Christian” genocidaires are slaughtering the Muslim population.

In the remote western village of Carnot, the few surviving Muslims for hundreds of miles have found refuge, at least temporarily, thanks to a Catholic priest named Justin Nary and a handful of African Union peacekeepers. The story is horrifying on every level:

Whewell traveled for hours from the capital Bangui along dirt tracks in a forest to reach the town of Carnot in the west of the country. It’s a place that few journalists or international agencies have reached. Once there, Whewell found a concrete church with a muddy compound full of displaced Muslims.

“It’s an overwhelming sight when you first see it,” says Whewell. “There are about a thousand Muslim fugitives with the few possessions they were able to bring with them, mostly battered foam mattresses.”

They are there, says Whewell, because of a “remarkably courageous” local priest named Father Justin Nary, who offered refuge to the Muslims. Some traveled for up to two weeks through the bush to reach Carnot once they heard of the priest’s offer. 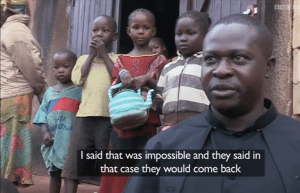 The Anti-Balaka militiamen heard of the offer, too, and arrived at the compound. They demanded that Father Nary release all the Muslims, but he refused.

“They told me if I don’t, they’ll come back with petrol and burn down this church, including me,” says the priest. “They brought back 40 liters of petrol and again threatened to burn down the church if I didn’t release the Muslims to be slaughtered. But I could not do that, so I gave them cash for them to leave these people alone.”

Whewell interviewed Haround Mamadou, a 20-year-old Muslim staying inside the church compound. He told Whewell that when the Anti-Balaka militia arrived in his town, they got out their machetes and starting cutting the throats of the Muslims in the village.

“They went through them one by one, cutting them into pieces.”

Then the boy described what happened to his own family. “My mother and father were at home with my little brother and [the militia] came and they said, ‘They are Muslims’ and then executed all of them, except me. I escaped and that’s how I’m here.”

A member of the Anti-Balaka militia told Whewell that they are killing Muslims out of revenge.

“It’s because the Muslims came and killed some our family and destroyed everything, that’s why we were angry. So we went to fight them and we killed them all. We took their women and children and their cattle. They’re ours now. We’ll give the women and children to the French troops, but the cattle are ours now. We don’t want any Muslims in the Central African Republic. They have to leave this country or wherever they’ll go, we’ll fight and kill them.”

The Anti-Balaka militia still remain outside the church compound gates. The only thing separating them from the Muslims inside is a small contingent of African Union peacekeepers who man the gate. Whewell says it is a situation that can’t go on much longer.

“The Muslims in Father Nary’s church are now the only Muslims for hundreds of miles around. Effectively in the whole western half of the country, there are hardly any Muslims left now. Thousands have been killed and hundreds of thousands have already been evacuated to surrounding countries.”

“Look for the helpers,” we read recently. Justin Nary is one such helper — risking his life to feed and shelter his Muslim neighbors. Like Paul Rusesabagina, he is matter-of-fact about what I see as extraordinary heroism. I admire the decision he made to act, but in his view it was not a decision — it was the only possible thing to do. That is what he told the militia when they threatened to kill him and burn down his church if he did not hand over the Muslim refugees to be killed. “Impossible,” he said. The genocidaires could imagine such a thing. Father Nary could not.

Many Christian and Muslim leaders in the CAR have made this same point. The country’s Alliance of Evangelical Churches has even threatened to “take action” against any of its members who “throw an infamous discredit on people of God, by identifying themselves as Anti-Balaka militia or Séléka rebels.” And a declaration from a coalition of Protestant denominations condemning the violence also complained of media reports characterizing the various factions as “Christian” or “Muslim”:

The confrontation between Seleka and anti-Balaka has started a cycle of reprisal in which the civilian population have fallen victim. We condemn this violence, whatever its origin. Moreover we do not accept the amalgam of labelling of anti-Balaka as “Christian” militia. Indeed the anti-Balaka are the expression of exasperation, with the ongoing atrocities, from a part of the population – mainly young men – that witnessed multiple abuses by Seleka rebels. However, we reiterate that all anti-Balaka are not Christians and that all Christians are not anti-Balaka. It is the same for ex-Seleka and Muslims.  Incorrect terminology that labels anti-Balaka “Christian militias” must be corrected. This amalgam propagated by national and international media has given a religious connotation to a crisis that is in its core political and military.

It is certainly true that the core of this crisis is political and military, not religious. And it is helpful for these religious groups and religious leaders to speak out and to condemn the way various factions in the conflict are exploiting sectarian differences to justify their lethal violence in pursuit of political aims, or in pursuit of simple revenge or profit from the spoils of killing.

The video above shows the strange procedure that takes place on Sunday mornings in Father Nary’s church in Carnot. The Muslim refugee families clear out of the sanctuary so that area Christians — many of whom may share the anti-Muslim sentiment of the “Christian” Anti-Balaka militias — can come to celebrate Mass.

This is surreal. To receive the body of Christ, broken for the world, these Christians must pass by and step around the broken bodies of their Muslim neighbors huddled outside the church — displaced from their homes by “Christians” with machetes and machine guns, and then displaced again by these Christians at worship. And then, during that Mass, the Christians of Carnot pray “forgive us our trespasses as we forgive those who trespass against us.” And they pray, “deliver us from evil.”

And then Father Nary says, “Lord Jesus Christ, you said to your apostles: I leave you peace, my peace I give you. Look not on our sins, but on the faith of your Church, and grant us the peace and unity of your kingdom where you live for ever and ever.” And all the people say “Amen.”

“The Peace of the Lord be with you always,” Father Nary says. And the Christians offer to one another the sign of peace.

Saint Andrew, Bagpipes, and Cats
November 30 was Saint Andrew's Day. Even though I am two days...
view all Progressive Christian blogs
What Are Your Thoughts?leave a comment
Copyright 2008-2021, Patheos. All rights reserved.