First there’s this, via Naum and Jim West and Candida Moss: 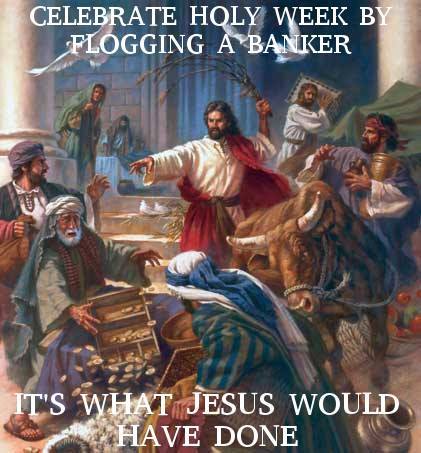 The WWJD? reference there is closer to the spirit of Charles M. Sheldon’s In His Steps than most of the contemporary allusions to his famous question. Sheldon was a Christian Socialist, after all.

Jesus chasing the predatory lenders out of the Temple is one of my favorite parts of Holy Week. In the Holy Week story, it’s the event that sets the whole grim treadmill in motion, but it’s also one of the few moments of clear triumph we can enjoy in this solemn week.

It’s also a final reminder of why the events that followed are so heartbreaking. Here’s someone standing up for the powerless against The Powers That Be who are preying on them, and for the rest of the week we watch this person methodically crushed for doing so.

That’s why the cleansing of the Temple is easier to look at than the rest of Holy Week, and why this second image is my favorite from the beautiful series that Kittredge Cherry posts every year at this time. This is from Douglas Blanchard’s moving series of paintings, “The Passion of Christ: A Gay Vision”: 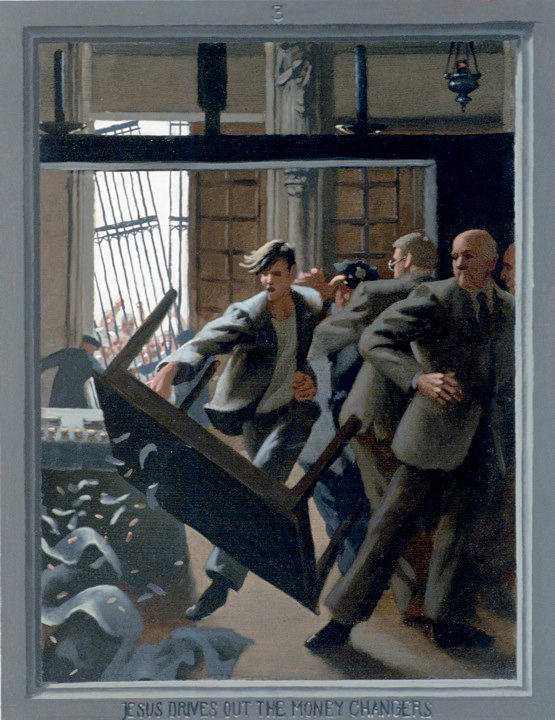 Many Christians who revere Sallman’s “Head of Christ” would balk at Blanchard’s gay vision of the Passion. Contextual theology is fine for those folks as long as the context is white Anglo-Saxon Protestantism. But reimagining Jesus as a powerful, privileged white guy, the way Sallman’s beloved painting does, contradicts and distorts the story in the Gospels. Reimagining Jesus as a despised outcast, as Blanchard’s paintings do, helps us grasp the core of that story.

Stranger Things and the Enormity of Evil
As a rule, I don’t watch stories with child stars or...
view all Progressive Christian blogs
What Are Your Thoughts?leave a comment
Copyright 2008-2021, Patheos. All rights reserved.
Close Ad