Jesus, clobber-texts, and the centurion’s ‘companion’

That was a text from my daughter. The old jokes say that when your kids go off to college, they only call to ask for money. My kid never asks for money, but she does like to keep me on my toes with the occasional surprise text asking about the first-century connotations of Greek words from the Gospels. (Yes, I’m enormously proud of her.)

This question has to do with the story in Luke’s Gospel (and also in Matthew 8:5-13) in which Jesus heals the pais of a Roman centurion. Our English translations almost always use the word “servant” or “slave” for that word, as in this rendition in the NRSV:

After Jesus had finished all his sayings in the hearing of the people, he entered Capernaum. A centurion there had a slave whom he valued highly, and who was ill and close to death. When he heard about Jesus, he sent some Jewish elders to him, asking him to come and heal his slave. 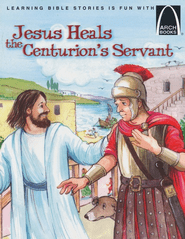 When they came to Jesus, they appealed to him earnestly, saying, “He is worthy of having you do this for him, for he loves our people, and it is he who built our synagogue for us.”

And Jesus went with them, but when he was not far from the house, the centurion sent friends to say to him, “Lord, do not trouble yourself, for I am not worthy to have you come under my roof; therefore I did not presume to come to you. But only speak the word, and let my servant be healed. For I also am a man set under authority, with soldiers under me; and I say to one, ‘Go,’ and he goes, and to another, ‘Come,’ and he comes, and to my slave, ‘Do this,’ and the slave does it.”

When Jesus heard this he was amazed at him, and turning to the crowd that followed him, he said, “I tell you, not even in Israel have I found such faith.” When those who had been sent returned to the house, they found the slave in good health.

That’s not wrong, but this wasn’t the only way that word pais was used in Jesus’ time. We think it usually meant servant or slave, but it also sometimes meant son. And also, sometimes, it was a euphemism for, basically, a man’s boyfriend or a younger, same-sex concubine.

It’s not unusual for words to have such very different meanings. Think of the many ways we use the word “companion.” Strictly speaking, it just means someone with whom one travels or with whom one spends a lot of time. It’s thus a common term for personal assistants — people in an economic relationship with an employer who would, in a more class-candid culture, be referred to as “servants.” So we might say, for instance, that “Adrian Monk arrived at the crime scene accompanied by his companion, Natalie Teeger,” and it would be a mistake to infer anything more intimate or romantic implied by the term.

But we also use that same word in a more “insinuating” way (as Jeff Bridges says in The Fisher King). We use it in much the same way first-century people sometimes used that word pais — to politely, indirectly describe an intimate, affectionate physical relationship. If we say “Matt Damon won an Emmy for portraying Liberace’s companion in Behind the Candelabra,” most people will understand that we mean something very different from what we meant about Monk and Natalie.

The centurion in Luke 7 seems so heartbroken over the plight of his “beloved” pais that some have argued the word there might be better translated as “son.” His anguish seems surprising, after all, on behalf of a slave or servant. Others point to that same deep emotion and see it as evidence that suggests we’re dealing with the other meaning of pais. But perhaps both of those arguments are too harsh — maybe this centurion just loved this loyal, faithful servant. Maybe it was just a Frodo-and-Sam situation. (Or is that a bad example? I mean Frodo and Sam as intended by Tolkien, not as written by him.)

It’s helpful, I think, to illustrate that ambiguity by using our own ambiguous term. “But only speak the word, and let my companion be healed.”

I’m not trying to explain away that ambiguity — in either direction. And I’m not sure the parallel version of the story in Matthew or the maybe-parallel story in John’s Gospel — in which the word “son” is used instead — gets us any closer to conclusive certainty about the relationship between this centurion and his pais. The story simply doesn’t give us enough information to be certain.

But then the story also doesn’t give Jesus enough information to be certain either. And Jesus never interrogates the man on that point. We don’t see a conversation like this:

“But only speak the word, and let my pais be healed.”

“Whoa, hold on. When you say pais, do you mean just, like, pais -pais? Or do you mean, you know, nudge nudge, wink wink, [Jesus makes air quotes with his fingers] pais?”

Jesus didn’t ask that, and he didn’t insist on entering the centurion’s home in order to inspect whatever living arrangements the man had with this beloved companion of his. Jesus simply praised the centurion’s faith and restored health and wholeness to his household and to all the relationships in it. That’s all we know for sure from the story.

Well, that and that the centurion was a centurion.

The centurion was unclean. He was a Gentile — strike one. He had sworn an oath of loyalty and service to a false god (Caesar) — strike two. And even if this particular centurion was trying his best to be nice about it, he was the enemy and part of an occupying army oppressing God’s people — strike three.

So for the sake of argument, let’s stipulate that “slave” or “servant” is a perfectly accurate translation here, an apt description of an unambiguously chaste master-and-servant relationship insinuating nothing that might perturb the sensibilities of even the most anti-gay modern clobber-texter. This story is still impossible to reconcile with the hermeneutic of those clobber-texters. Set aside the half-dozen clobber-texts cited as authoritative proof that Christians must be anti-gay, there are far, far more such texts authoritatively forbidding Jesus to aid this unclean enemy, this Caesar-worshipping Gentile. The clobber-texts forbidding that could fill a book. They could fill 39 books, and then some.

“It is unlawful for a Jew to associate with or to visit a Gentile,” Jesus’ disciple Peter said. And that was true. That was law. That was Bible.

But Jesus doesn’t mention any of those clobber texts. Nor does he heed them.

Instead, Jesus heads directly to the unclean home of this unclean outsider. He exhibits an appallingly low view of the authority of scripture by — what’s the word they always use? — trampling on the clear, authoritative teachings of the Bible. Jesus turns his back on the Bible to serve the “false gospel of nice,” following some “malleable deity” instead of obeying the unequivocal clear commandments of the Word of God.

It’s enough to make one wonder whether Jesus was even a Christian at all.

I don’t think we have enough to go on in this sketchy little story to state confidently that Jesus healed a centurion’s boyfriend. But those who dismiss that possibility as outrageous are missing what’s really outrageous in this story — Jesus’ outrageous disregard for clobber-texting.

That’s not just poor biblical interpretation, it’s also a shameful ingratitude. The overwhelming majority of Christians who call upon clobber texts to slam the door against gay Christians are themselves Gentiles — people who are only able to call themselves Christians because Jesus showed us that clobber-texts don’t work that way. They snuck in through that same door they’re now trying to slam against others. That’s pretty low.