‘God and the Gay Christian’ is not a new thing

To hear the politicians, marketeers and fundraisers of the religious right talk, you’d think that Matthew Vines’ book God and the Gay Christian is full of of startling, unprecedented new ideas.

It’s not. As Randy Potts reminds us at Box Turtle Bulletin:

There have been books on gay apologetics for as long as there have been openly gay Christians, ever since 1972 when Troy Perry, who founded the first gay-affirming Christian church in Los Angeles in 1968, wrote The Lord Is My Shepherd and He Knows I’m Gay

. Performing same-sex unions as early as 1970, Perry started a conversation largely ignored by the queer liberation movement that followed in the footsteps of Stonewall. By 1980, John Boswell was giving academic grounding

to what was still a very new idea, that homosexuality and Christianity were not necessarily incompatible, and since the mid-90s we have seen an explosion of books telling the story of gay people who found a way to come out of the closet and maintain their faith: Mel White, Gene Robinson, Andrew Sullivan, and so on (Rosaria Butterfield is one published lesbian example).

These books have not been obscure — the Rev. Peter Gomes’ 2002 The Good Book was a New York Times best-seller. And they go way, waaay back — Jeremy Bentham wrote a book defending the compatibility of Christianity and same-sex love in the 1820s.

Virginia Ramey Mollenkott reminds us of this history in her review of Vines’ book:

I must begin by admitting my surprise that Matthew Vines writes as if his is the first evangelical and Bible-respectful defense of same-sex relationships and marriage. Back in 1978 Letha Dawson Scanzoni and I published exactly such a book entitled Is the Homosexual My Neighbor? A Positive Christian Response. At that time, our lives were in danger: Harvey Milk, who attended the Harper San Francisco luncheon celebrating our book’s release, was murdered shortly thereafter for being gay.

She’s not wrong. And if she comes across as a bit defensive in her review, that’s because she’s been putting up with being pointedly ignored for 40 years. 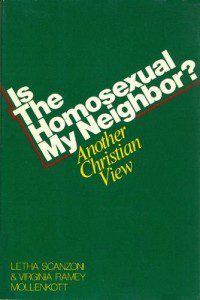 Mollenkott, a graduate of Bob Jones University, was largely edited out of the evangelical subculture because of that book. She was one of the first prominent targets of the doublespeak that white evangelicalism uses to insulate itself from any challenge to its official required “homosexual stance.”

It is no longer 1978 and that particular silencing tactic no longer works. It’s no longer possible to dismiss Matthew Vines’ argument and facts and scholarship because, well, you know … (looks furtively over both shoulders, then whispers) “He’s gay.” Even within the carefully curated confines of the white evangelical subculture, that won’t work anymore. Even there, the question is now: Who cares if he’s gay — is his argument true? And why are you whispering?

And Matthew Vines isn’t someone it’s easy to make disappear by magically proclaiming him as a “post-evangelical” who’s not really one of us. He’s not some beer-drinking emergent Wild Goose. He’s not some mainline Protestant quoting Bultmann or (heaven forfend!) Tillich. The guy is just plain evangelical, as Brandon Robertson recently wrote over on Patheos’ evangelical channel:

Matthew is actually an evangelical Christian. A real, legitimate, evangelical. Matthew holds a very evangelical theology of the Bible, Salvation, and Sexuality. He believes the Bible is the inspired Word of God. He believed that salvation was through faith in Christ alone. He believed in a literal hell and a literal heaven. He admired the popular reformed preachers and theologians like John Piper, Al Mohler, and Timothy Keller. And he wasn’t bluffing. He wasn’t [toeing] a party line to get a platform. He is the real deal.

That last sentence, I think, is a bit naive about why more such people are not easy to find within the evangelical tribe. It’s because the gatekeepers are quite effective. They’ve learned to identify, “farewell” and neutralize such people as they appear.

But Robertson is right in saying that Vines is, unequivocally, an evangelical who unmistakably approaches the Bible as a white evangelical:

And this makes him a threat to all evangelical leaders who have tried to use the issue of homosexuality as a determining factor of one’s orthodoxy. Because Matthew is coming from the same theological disposition as all of them. He shares all of the same core theological commitments that they do. He’s not going to be caught speaking some sort of “progressive-liberal-heresy.” He’s truly one of them. He has gained his skills and theology from them. He’s a product of their teaching and communities. And he is lovingly committed to embracing them. To remaining one of them. And to changing their minds on this issue using the Bible as his foundation.

What Robertson identifies here as the strength of Vines’ challenge to the evangelical gatekeepers — those “evangelical leaders who have tried to use the issue of homosexuality as a determining factor of one’s orthodoxy” — also presents them with a subtle and insidious trap. Vines’ argument arises from “the same theological disposition” with the “same core theological commitments” as you’ll find from white evangelicals like Piper, Mohler, Keller, etc. That means it’s vulnerable to the same critiques that their white evangelical theology is vulnerable to — i.e., what Robertson refers to, tongue-in-cheek, as “progressive-liberal-heresy.”

This fall, we’ll see yet another book offering an “evangelical and Bible-respectful defense of same-sex relationships.”

“Jennifer Knapp makes a case for being gay and Christian in upcoming book,” Jonathan Merritt reports for Religion News Service. Knapp was a big name in “contemporary Christian music” — the soundtrack of the white evangelical subculture. She sold more than a million CCM records before coming out in 2010.

I’m guessing that her upcoming memoir — Facing the Music: Discovering Real Life, Real Love and Real Faith — will be a bit more “post-evangelical” than Vines earnest biblical study. But it will also be — as Vines’ book is — an example of that most eminently evangelical of art forms: a personal testimony.

Simon & Shuster says Knapp’s book “talks about the importance of her faith, and despite the many who claim she can no longer call herself a believer, she maintains that she is both gay and a Christian. … Jennifer has witnessed heartbreaking struggles as churches wrestle with issues of homosexuality and faith.”

The gatekeepers, no doubt, will attack that testimony and seek to discredit it as more of the same “progressive-liberal-heresy.” But I’m not sure that will be persuasive. This is someone whose honest, heartfelt music has touched millions of evangelicals. They’ve closed their eyes and sung along, joining with her in worship. She won’t be easy to whisper into non-existence.

Let’s close with a taste of Knapp’s testimony, this is her and Margaret Becker performing Knapp’s “Sing Mary Sing“:

Yeah, that’s a “Christmas” song, but it’s also a reminder of what it was that Mary was singing:

He has shown strength with his arm;
he has scattered the proud in the thoughts of their hearts.
He has brought down the powerful from their thrones,
and lifted up the lowly;
he has filled the hungry with good things,
and sent the rich away empty.

You know, more of that progressive-liberal-heresy stuff.

May 27, 2014
Remember, remember from where you came
Next Post