The need to believe in something awful

Many times on this blog I have recommended Mike Hertenstein & Jon Trott’s fascinating, gentle, and thorough exposé of “evangelist” and “comedian” Mike Warnke, Selling Satan: The Evangelical Media and the Mike Warnke Scandal.

As it’s subtitle suggests, Hertenstein & Trott’s book is a two-pronged indictment. In addition to documenting and disproving Warnke’s sordid lies, they also document the willful credulity of “the evangelical media” that refused to ask or to explore any of the obvious questions and the glaring contradictions in Warnke’s popular stories.

The book I want to read — the one that hasn’t yet been written — would explore the third party that enabled and sustained Warnke’s initial success: His audience. That is what I find fascinating about people like Mike Warnke or his fellow grifters on the religious circuit — people like Bob Larson, for example. Those men themselves are just con-artists who will say whatever they need to say to separate their audience from its money. That much I understand. What I don’t understand is why they’ve had so much success peddling such horrific horror stories about imaginary monsters.

Here, via Nesteroff, are some examples of the kind of story Mike Warnke used to tell:

Warnke claimed he was a former “high priest of a satanic cult,” and explained his experiences in detail when he toured the media circuit to promote his new book. An article in Guideposts magazine quoted Warnke as saying, “Our services were held in a barn in an orange grove before a goat’s head altar and an inverted cross. In a hideous mockery of the mass we drank and ate ghoulish concoctions I would rather not describe … I was groomed for the priesthood of the cult …  as a priest in the Brotherhood I was given two elegant apartments rent free, a black Lincoln Continental complete with chauffer, all the jewels and clothing I could wear … Under my leadership we ultimately grew to 1500 in less than a year.” The Denver Post stated, “Mike Warnke was a teenage grave robber, a heroin addict and pusher. He weighed 110 pounds, had waist-length bleached white hair and 14-inch fingernails … one of his favorite rituals was to draw blood from his wrist, mix it with wine and urine, and drink a toast to Satan …” … As described in … Selling Satan, “Mike said he helped organize … rituals that degenerated from cat killing to finger chopping cannibalism to the group rape of an innocent virgin. Warnke was always careful to exclude himself from direct participation in the rape, though he admitted orchestrating it.”

None of any of that was true, but Warnke’s audience believed it. They enjoyed believing it. For whatever reason, they wanted and needed to believe it.

Let’s put this more bluntly: Hundreds of thousands of good Christian people believed these stories because they preferred a world that included Satanic ritual abuse and human sacrifice to a world without such monstrosities. Given a choice between a world full of monsters and the real world, they chose the monsters.

I have many theories, but no real answers. Monsters are exciting, and perhaps its just the allure of that excitement in an otherwise quietly desperate life of restlessness and vague desire. Maybe the possibility of monsters suggests the possibility of mystery and transcendence more generally. Maybe we invent monsters as a way of embodying and circumscribing our larger, deeper, more amorphous fears. Or maybe it really is the whole “Satanic baby-killers” dynamic I’m always harping on here — the need to invent some superlative evil compared to which we can regard ourselves as superlatively righteous. 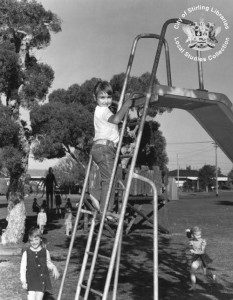 Patrick Dane wrestled with some of these same things in a What Culture post about the creation and embrace of a 21st-century urban legend: “Why Slenderman Works: The Internet Meme That Proves Our Need to Believe.” He’s discussing a creepy Internet creation — a gangly, faceless, dark-suited, child-killing monster that reminds me of The Gentlemen from Buffy. (Here’s Know Your Meme’s entry on Slenderman/Slender Man.)

Dane notes a key difference between this legend and those that circulated pre-Google: We know that it’s fiction. The creature/character was invented five years ago for a photoshop contest by the site Somethingawful. The goal was to create a fake photo of some “paranormal” phenomenon that could then be accepted by paranormal Web forums as authentic. So this was a poe, a joke, a satire. It was created by a guy named Eric Knudsen and posted to Somethingawful’s contest in 2009.

That information is all easily, publicly available. It’s first-page search-engine result stuff. So it’s not possible for his story to have what earlier, pre-Internet urban legends offered — that slim toehold that allowed listeners to plausibly pretend that those stories were true. That pretense is central to the appeal of every urban legend — from Hookman to Candyman to Bloody Mary to Cadillac-driving welfare queens. It’s why Mike Warnke was able to be so successful for so long. But in the case of Slenderman, such unconscious pretense is impossible — or, rather, it is more difficult to maintain such pretense without acknowledging that it is only that, a pretense.

More difficult, but not impossible, because while the Internet precisely identifies the fabrication of the story, that same Internet can also provide a community of others to participate in the pretense and reinforce it for one another. “The internet ruins the myth,” Dane writes, “but at the same time, the Internet gives it an authenticity and connectivity that continually builds upon it.” He concludes with a discussion of the human need for myths:

We know Slenderman is fake. We know he isn’t standing behind us now right now. But I bet after an episode of Marble Hornets or playing a game of Slender, you still double check. As scary as you might or might not find him, you want him to exist. We want our world to be a mystery and bigger than us. We need it to be. We need Slenderman.

I follow that up to a point. I agree that we need … something, something transcendent. But why should that transcendent something take the form of an imaginary monster?

This human impulse for myth-making is sometimes invoked as an explanation — or even a dismissively hostile explaining-away — for belief in God. I get that. I disagree, of course — I’m a Christian. The Christian story (some forms of it, at least, we’re a diverse bunch) makes some rather appealing assertions: God is love; we shall not sleep, but we shall be changed; all things are becoming new. My religious beliefs suggest that ultimately love wins, death and evil lose, and we will be loved, healed, reconciled, restored, embraced and forgiven. So I appreciate the argument that all of that might just be a wish — a myth or a fantasy that some of us choose to believe because it sounds so good and so appealing.

Again, I don’t think that is a mere fantasy. I think that is actually true and real and how the universe works. But I can’t prove that, and it’s certainly possible that I’m wrong. But I can also appreciate how that might all sound like wish-fulfillment and a myth-making impulse yearning for some transcendent Big Other that promises to make sense of a senseless world.

But how can such an “explanation” apply to something like Slenderman or to Mike Warnke’s Satanic cannibals? If those are just wish-fulfillment fantasies, then what would ever provoke anyone to wish for such a thing? “God is love” is an appealing idea. “Gruesome monsters are preying on innocent children at the edge of the dark” seems far less appealing. I can see how a myth-making attraction to wish-fulfillment fantasy might account for the denial of monstrosities, but not for the invention and the weird popularity of imaginary monsters.

Which brings us back to where we started: Why? What was the appeal of Warnke’s stories for his enthusiastic audience? Why do we need and want and prefer to believe in something awful?

Patrick Dane’s essay on Slenderman was written two years ago, but I wound up reading it last night because something awful happened in Waukesha, Wisconsin. Two little girls, aged 12, lured a classmate to a sleepover party and then into the woods where they allegedly stabbed her 19 times. Police say the girls told them the attempted murder had something to do with their belief in Slenderman. They had read stories about this monster — imaginary, fictional stories about an imaginary, fictional creature — and they were trying to prove he really exists, or to protect themselves from him, or to prove themselves worthy of him.

June 2, 2014
'Left Behind' teaser trailer doesn't look good, but it looks better than the book
Next Post

June 3, 2014 In starry fields you wander there
Recent Comments
0 | Leave a Comment
"In a similar vein, I was delighted to visit Boston and find many of the ..."
Illithid Postcards from the class & culture ..."
"My mom used to have a 1960s-era cartoon with a child caught red-handed stealing cookies ..."
reynard61 12/7 Flashback: The base
"No. I'm talking about a fellow professional with whom we unfortunately need to deal, and ..."
MaryKaye 12/7 Flashback: The base
"It's a non-story. Sorry."
P J Evans 12/7 Flashback: The base
Browse Our Archives
Related posts from slacktivist