I submit that Geyser and Weier were engaged in a form of play that extended the Slender Man legend complex through performance. Then, in a moment of lowered inhibitions, irrevocable consequences occurred, making the play world real. In 1983, folklorists Linda Degh and Andrew Vazonyi described how legends are transmitted through ostension, in which physical actions and performances rather than words or media, affirm the legend. In this way, facts can be turned into narratives and narratives can be turned into facts. Ostension can include pranks, such as the envelopes full of Bisquick that were mailed following the 2001 anthrax scare, or — in extreme cases — to copycat crimes.

The girls’ fascination with Slender Man was performative. Anna Freud noted that children often pretend to be monsters, acting out the very thing that they fear. Sometime between December 2013 and January 2014, Geyser came upon the idea of becoming “proxies” for Slender Man — that is, living extensions of the legend complex. The game of becoming “proxies” was a form of ostension, proving the legend is real. One girl explained, “Many people do not believe Slender Man is real. [We] wanted to prove the skeptics wrong.”

Ikuya Sato argued that senseless youth crimes often occur through a sort of play in which players attempt to “reach the limit” of their assumed roles, resulting in irrevocable consequences. Sato’s model of “corrupted play” fits several cases of youth crime with occult elements but no apparent motive. The plot to sacrifice a child seemed to unfold as a game that neither player wanted to curtail. Weier packed items she would need for her new life in Slender Man’s mansion, including photos of her family. Their original plan to kill the victim in her sleep was repeatedly aborted and rescheduled. Prior to the attack the knife was passed back and forth, as both girls were reluctant to go through with it. The girls only succeeded in the attack by sharing agency — with Geyser wielding the knife and Weier giving the order to “Go ballistic.” In this way, both girls could feel they were not making a conscious decision.

Ah. Laycock’s* piece is a bit dense and full of academic language, but I recognize what he’s describing.

It’s a kind of game. The players select a fantasy — one they know to be a fantasy — and play as though it were real. This is exciting. This makes them special. But they still know it’s not real.

Yet by performing the story — acting it out rather than merely retelling it — they can make the fantasy come alive as something more than just a story: “Narratives can be turned into facts.” 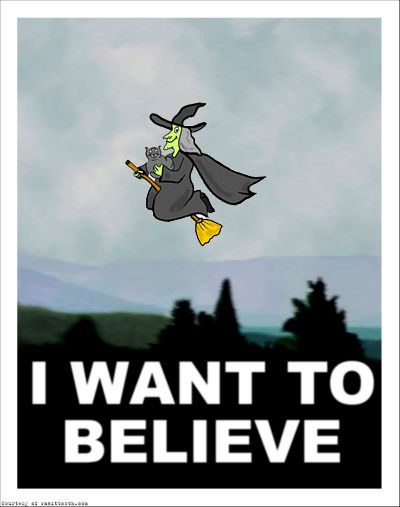 This can’t usually be done alone. It takes two (or more). Self-deception is always difficult to manage completely alone. The part of you that is doing the deceiving will always be at least partly aware that you’re doing it. Or, to put it another way, no matter how much you tell yourself that you’re special and heroic, it can never be as convincing as when you hear it from someone else.

Laycock’s discussion of “ostension” and “corrupted play” helps me to understand a bit more what is at work in the lies, legends, rumors and fantasy role-playing of the Satanic baby-killer mythology that has shaped so much of American religion and politics, and that has distorted my own white evangelical tradition beyond all recognition.**

I circled around this, describing it as best I could, in the posts “False Witnesses” and “False Witnesses 2,” in which we discussed the pernicious urban legend about Procter & Gamble as a window into this weird desire to pretend the world is full of Satanic baby-killers. That legend was obviously false — too ridiculous, too full of holes and contradictions for anyone to genuinely be fooled by it. Yet many people chose to be fooled by it because this kind of “performative” play can be thrilling.

Those people, in turn, spread the rumor to others, not in an attempt to deceive those others but rather, as I wrote, as an invitation to participate in mutual deception. “Come play with me.” This is from that earlier post:

Joseph Laycock’s description of the “corrupt play” dynamics that fueled the Slender Man stabbing seem accurate to me. I think this is an insightful way of grasping what happened with those two little girls and also a perspective that helps us to understand what went so horribly wrong with Jerad and Amanda Miller:

Late Sunday, law enforcement officials say, Miller and his wife, Amanda Miller, embarked on a shooting spree that included the ambush-murder of two Las Vegas police officers as they ate at a restaurant and the killing of a male shopper at a nearby Walmart. Witnesses said that they shouted “this is a revolution” and draped the officers with a Gadsden flag — a symbol of liberty used by both the antigovernment “Patriot” movement and many Tea Parties — before going on to kill themselves as police closed in.

The Millers’ embrace of the right-wing conspiracy theories peddled by Alex Jones, Glenn Beck and Fox News was, I contend, every bit as much of a pretense as the make-believe choice made by those who spread the P&G rumor, or by little girls caught up in scary stories they read online. At some level, they knew it was all a fantasy, but they liked that fantasy. It was exciting, and they liked the way it made them feel special and heroic and smarter than everyone else for being in on this secret knowledge. By performing that fantasy, they could make it seem closer to real. They could make it seem more believable when they heard themselves telling themselves that it was real.

And because there were two of them, together, they could feed off of one another. Each could constantly challenge the other to stretch the limit of their assumed roles. Neither player wanted to be the first to curtail the game, and by “sharing agency” they were able to share the burden of self-deception — performing a crime that each at some level knew was wrong in service of a fantasy that each at some level knew was false.

* Joseph Laycock has a book coming out next year titled, Dangerous Games: What the Moral Panic Over Role-Playing Games Says About Play, Religion, and Imagined Worlds. Yes, please.

June 10, 2014
The Stupidest Thing I Have Ever Read
Next Post

"All People Are Holy": The Theology...
Mercy Not Sacrifice
Related posts from slacktivist

A Path Toward Societal Equity (Part 2 of...
"He was not rejected by the people. He was silenced by the...
view all Progressive Christian blogs
What Are Your Thoughts?leave a comment
Copyright 2008-2020, Patheos. All rights reserved.