For God so loved the world

Darrell Dow shares this image from an ad for A Beka Books, the homeschooling publisher of Pensacola Christian College: 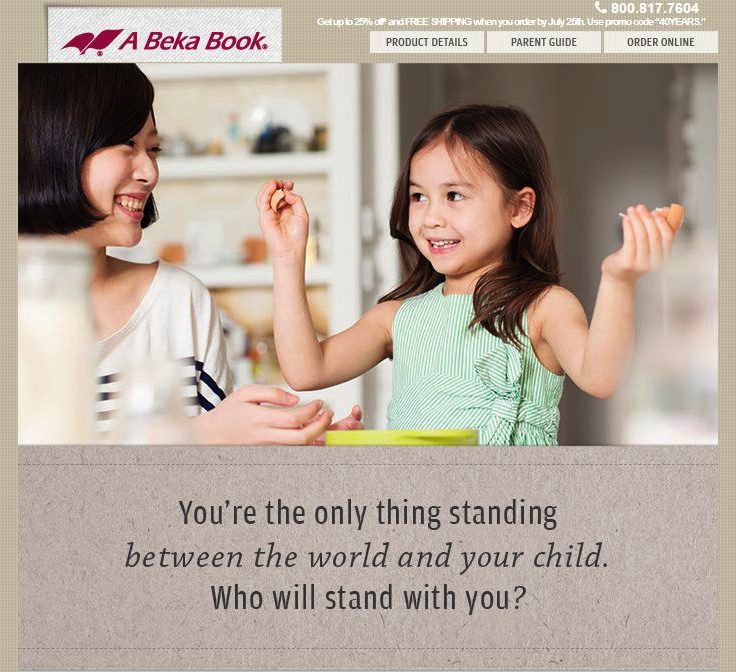 I had to re-read that several times before it finally sunk in that they were saying “standing between the world and your child” was supposed to be a good thing.

The sad thing is that sentence is utterly true for A Beka Books’ target audience: “You’re the only thing standing between the world and your child.”

The sick thing is that the next sentence doesn’t say, “So get the heck out of their way.”

Keep in mind that A Beka Books fancies itself an educational publisher. This slogan perfectly captures the stunted notion of “education” they have in mind. The whole world is right outside your door, a glorious universe of possibilities, wonders, joys, truth and dazzling beauty. We’ll help you make sure your kid never sees any of it.

Remember, too, that this is coming from Christians of the sort who loudly proclaim their devotion to the Great Commission: “Go ye into all the world, and preach the gospel to every creature.” Whatever the second part of that means, it’s surely impossible to do if you refuse to do the first part — if you think of the world as something to be kept apart with barricades and barbed wire.

And remember, too, that these are Christ-ians, people who purportedly worship the word become flesh, the incarnate God who taught us that “God so loved the world” — God loved the κόσμον, the cosmos, the whole kit and caboodle of the universe.

I’ve said this before, but white fundamentalists remind me of the Krikkiters from Douglas Adams’ Hitchhiker’s Guide. In Adams’ story, the planet Krikkit was enveloped in a dust cloud that kept them from seeing the rest of the universe. But finally, one day, they developed the technology to launch a rocket up into space, finally seeing beyond the cloud that shrouded their planet:

They flew out of the cloud.

They saw the staggering jewels of the night in their infinite dust and their minds sang with fear.

Ultimately, of course, none of these homeschooling parents will be able to keep back the world any more than they’re able to keep the sun from rising. You can homeschool your kids, allowing them to read nothing but A Beka Books, and then send them off to Pensacola Christian’s hermetically sealed campus to complete their education, but eventually they’ll find their way around all the obstacles you’ve placed between them and the big wide world.

“You’re the only thing standing between your child and the world.”

That’s home. That’s us. On it everyone you love, everyone you know, everyone you ever heard of, every human being who ever was, lived out their lives. The aggregate of our joy and suffering, thousands of confident religions, ideologies, and economic doctrines, every hunter and forager, every hero and coward, every creator and destroyer of civilization, every king and peasant, every young couple in love, every mother and father, hopeful child, inventor and explorer, every teacher of morals, every corrupt politician, every “superstar,” every “supreme leader,” every saint and sinner in the history of our species lived there – on a mote of dust suspended in a sunbeam.

You’re standing between your child and the world. For God’s sake, get out of their way.