Jonathan Edwards was a slave-owner.

That can be surprising because we tend to think of slavery as a strictly Southern calamity. Edwards was a New Englander who later became president of the college in Princeton and we Americans often prefer to forget that American slavery was once common in places like Massachusetts and New Jersey. Edwards was a clergyman and an intellectual, so unlike George Whitefield — another prominent figure in the Great Awakening — he was never involved in a Southern plantation wholly dependent on slave labor. But Edwards’ New England household was run by slaves.

We know their names, or, at least, we know the names that Edwards called them. There was Venus, a girl whom Edwards purchased in 1731, right off the slave-ship in Massachusetts. Years later, Edwards would condemn the slave trade while defending slave-keeping itself, but he hadn’t yet arrived at that distinction. In 1731, Edwards saw the presence of slave-ships in Massachusetts as a convenience, not an abomination. And so he purchased Venus, who was probably about 14 at the time.

And we know the names of others from Edwards’ will and the executors of his estate. The inventory of Edwards’ “possessions” lists “a negro boy named ‘Titus,'” And his will provided for the sale “in open market” of “two negro slaves, viz.: the one a negro man name Joseph, the other a negro woman named Sue, and is wife to the said Jo.”

I invite you to take a moment to reflect on those names — those biblical names of Titus and Susanna and Joseph. Joseph.

This was a thing that pious white Christians once did. They purchased enslaved persons, stole their labor, and called them by names like Joseph or even Moses. This makes the “man of his time” excuses that much harder to swallow. Theirs was a generation that knew Joseph. That exempts them from even Pharaoh’s poor excuse. I tell you that on the day of judgment it will be more tolerable for the land of Egypt. 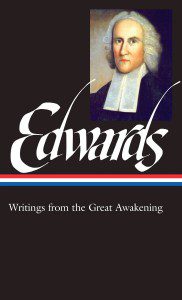 It’s unfortunate that Edwards is best known these days for the fire-and-brimstone sermon “Sinners in the Hands of an Angry God,” because that skews our idea of the man and our expectations of him. He had a curious and agile mind and he liked to chase after ideas to see where they led. That can be fascinating — even when, as I often do, you completely disagree with him and feel he’s racing down a wrong turn.

One of my favorite bits from Edwards was his discussion of the Calvinist doctrine of total depravity. That term, as I’ve said before, can be misleading, causing people to think it means something more like utter depravity. The idea isn’t that we humans are superlatively depraved by original sin, or that we are wholly depraved, but rather that our sinfulness taints every aspect — the totality — of our being. “Pervasive depravity” might be a more helpful term for this idea.

Edwards set out to challenge the idea that this fallen nature was somehow located in a single aspect of humanity. He didn’t want his readers to think that it was a matter of flesh vs. spirit, or body vs. intellect — that we were pure minds trapped in sinful bodies, or some such. So he methodically reviews various aspects of human nature — the mind, the will (whatever that is), etc. — rejecting in each case the idea that this is the unique location of our sinful depravity. It’s a fascinating passage (I can’t find it just now) in part because Edwards offers a survey of 18th-century ideas about human nature and human personality. One gets the sense that if he had been writing in the early 20th century, he’d have engaged the Freudian ideas about “id” and “superego,” systematically engaging and contending against the belief that any one of those was somehow uniquely the seat of human sinfulness.

I bring this up here because I think it illuminates our task when evaluating the heritage of white Christianity bequeathed to us from the theologians of slavery. The rot is pervasive — infecting every aspect of white Christianity in America. As Edwards argued, this depravity is not confined to a single location — a single misstep that can be identified and excised with surgical precision, leaving the remainder intact and unperturbed by that correction. Its roots are woven and interwoven throughout the whole. The depravity is total.

I also bring this up because I do not want anyone to mischaracterize what I’m exploring here as “attacking Jonathan Edwards.” I’m not attacking Edwards, or even criticizing him. No criticism from the likes of me is needed. The man owned slaves. He bought and sold human beings and stole their labor for a lifetime. He bought and sold children. He thus stands condemned as a simple matter of fact. Nothing I say or refuse to say could possibly add or subtract from that grave condemnation. And if you don’t already see that, then I’m afraid nothing I have to say about it will be of any use, as we apparently lack any common language or moral framework.

What I’m trying to do here, in part, is to apply Edwards to Edwards. His understanding of total depravity provides a helpful description of what this task entails, but it also provides an explanation for why this task is necessary. And I suspect that — at least on the abstract, intellectual level — Jonathan Edwards would agree with that.

June 20, 2014
Our job is to unlearn the lies we learned from the theologians of slavery (part 1)
Next Post