Unlearning the lies we learned from the theologians of slavery (part 3) June 26, 2014 Fred Clark

In 1850, at Andover Theological Seminary, the biblical scholar Moses Stuart wrote Conscience and the Constitution with Remarks on the Recent Speech of the Hon. Daniel Webster in the Senate of the United States on the Subject of Slavery.

Webster had spoken against “the subject of slavery.” Stuart’s thought on that subject was, in his view, more nuanced. Like all Very Serious People, he sought a Third Way between polar extremes, taking great care to avoid what he saw as the impieties of the radical abolitionists who were disregarding the clear biblical principles affirming slavery as an institution. But on the other hand, Stuart also agreed with some of the abolitionists’ critique of American slavery as practiced in 1850, and so he called for a gradual, voluntary emancipation.

This Third Way compromise was regarded as eminently reasonable by the Very Serious People of Stuart’s day, but from the vantage point of 164 years later, his thoughts “on the Subject of Slavery” seem reprehensibly clueless because they fail to give due consideration to the subjects of slavery — to the very real injustice suffered by the very real people who were then enslaved.

Stuart’s book enlists Jonathan Edwards in defense of his argument that slavery was permitted and affirmed by the Bible, writing:

Who does not know that the immortal Edwards — immortal as much for his great piety as for his intellectual power — left behind him in manuscript an Essay on the Slave-trade (probably still extant), in which he defended the trade with all his ability, on the same ground that Moses required the fugitive heathen slave to be detained, viz., on the ground that it would bring the perishing heathen within the reach of the Christian influence.

If the manuscript Stuart cites was still extant in 1850, we cannot find it today. What we do have, however, is a letter written in Jonathan Edwards’ own hand in which the great theologian angrily defends a fellow clergyman and a fellow slave-owner. That letter was published and discussed by Kenneth P. Minkema, who also highlighted the above quote from Moses Stuart.

Minkema published Edwards’ letter defending slavery and offered a detailed context for it in two articles,* and I want to quote extensively from them here just to provide a better sense of what his identity as a slave-owner meant for Jonathan Edwards.

Here is Minkema on the basic outlines of this subject:

Whatever questions Edwards had about the institution of slavery, he accepted it. In fact, he owned several slaves: Joseph and Lee, a woman named Venus, purchased in 1731, and, listed in the inventory of his estate in 1758, a “negro boy” named Titus. Edwards’s willingness to participate in the practice of slavery is readily evident in the letter. After complaining about the injustice being done to the minister, he pointed out that many things, such as “Eating & drinking,” led to sin, “but,” as we cannot stop taking nourishment, “we are not theref[ore] to abstain.”

Moderation in all things, then, including slavery.

His responses to opponents of slave-owning suggest that he espoused the conventional view that holding slaves was permissible as long as they were treated humanely (as Massachusetts law required) and encouraged to become Christians. Defending slaveholding by pointing to its cultural and religious benefits for the slaves had been commonplace in New England since at least 1680. Acculturation and Christianization of slave were among the traditional duties to which ministers exhorted slaveowners. Edwards acknowledged that slavery could be a cruel and sinful thing, as when Europeans encouraged Africans to seize fellow Africans and sell them into slavery, yet slave-owning was justified if the slave was purchased legally and treated decently.

Here we see one of many wrong turns taken by white theology as a consequence of slavery. This is one of the roots of the contemporary belief in white Christianity that, in its language, the Great Commission outranks the Greatest Commandment. The spread of the gospel — evangelization — becomes the paramount concern, eclipsing everything else. The matter of justice no longer matters. Or, rather, justice is redefined as that which best permits and promotes the spread of the gospel. The Golden Rule is reinterpreted and reinvented to mean that our foremost concern is to ensure that our neighbors hear “the gospel” by any means necessary — even if that involved kidnapping them, torturing and enslaving them.

Jonathan Edwards eventually came to oppose the Atlantic slave trade while still defending slavery and slave-owning itself. He came to criticize the cruelty of seizing free Africans and slaughtering them by the thousands in the Middle Passage, but not because such atrocities were, themselves, inherently unjust. He opposed them, again, because he feared they could create a hindrance to the spread of the gospel. As Minkema writes:

Continuing excursions into Africa (or anywhere else) for slaves created resentment against Christian Europeans that could ultimately thwart evangelization. Quite opposite from providing an opportunity to Christianize, as its defenders claimed, the slave trade actually decreased the chance to spread the gospel elsewhere.

That’s not entirely wrong — the slave trade surely did create such resentment and this cruel injustice certainly did “thwart evangelization.” But to regard this as the primary reason to oppose the slave trade reveals again how slave-owning came to twist and distort white theology into something warped, half-blind and incapable of comprehending the prophets or Jesus’ gospel of the kingdom.

And that brings us closer to the crux of the problem — the way slavery caused white Christianity to elevate “spreading the gospel” over the substance of that gospel itself.

Minkema credits Edwards, as others have, for including outreach to African Americans in the revivals of the Great Awakening, but reminds us to keep that credit in proportion:

Scholars have commented, in passing, on the implicit leveling impact of African Americans on full church membership during these awakenings. Theoretically, full membership accorded equal status to blacks and whites as fellow Christians. In his published treatises on revivals, Edwards time and again pointed to black converts who, he declared, had been “vindicated into the glorious liberty of the children of God.” The “liberty” he assumed for blacks was not a social and political liberty on a par with whites, but a solely spiritual one. Even ontologically, Edwards harbored a typically paternalistic outlook that saw black and Indian adults, before conversion, as little more than children in the extent of their innate capacities. To be sure, both blacks and whites were equally in need of the means of grace and of salvation, but that was as far as equality went.

There we can see a hint of what was done and of what, therefore, will need to be undone if we are not to be undone by it. 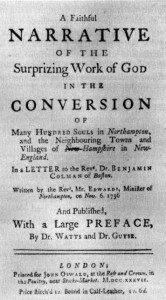 Owning slaves required Jonathan Edwards to redefine and compartmentalize his understanding of “the glorious liberty of the children of God.” This “solely spiritual” liberty was bounded. In order for it to be compatible with Edwards’ slave-owning, it could only be allowed to mean one set of things and it could not be permitted to mean more than that.

Minkema traces this distortion within Edwards’ own preaching:

At the very start of his preaching career in New York City, he delivered sermons that equated sin with slavery and presented servitude in terms of personal spiritual reformation. Although these strategies were typical in Puritan rhetoric, Edwards’s presence in a slave-trading center may have given them new meaning for him. In one sermon in particular, “Christian Liberty,” Edwards presented, as Wilson H. Kimnach described it, “the image of a Messiah literally freeing slaves as a radical abolitionist; there are no qualifiers,” no use of metaphors, at least at first. The very opening sentence, in fact, originally stated that when the Messiah came “he should proclaim a universal liberty to all servants, slaves, captives, vassals, [and] imprisoned [or] condemned persons.” Before Edwards actually delivered the sermon, he went back and, in an apparent tactical withdrawal, deleted the word “slave” from this litany. All the same, the Messiah was not yet come; the time of Jubilee had not arrived, nor would it likely come for some time, and until then slavery was sanctioned.

Justice and Jubilee get punted to the sweet by-and-by. This is white theology.

“Today this scripture has been fulfilled in your hearing,” Jesus said after reading that passage.

One of the more interesting things about Edwards’ letter in defense of slavery is that the clergyman he was defending was a staunch Arminian — a man whose theology was anathema to Edwards’ own Calvinist views. Minkema addresses this:

To say the least, Edwards found himself in an awkward situation, a situation that wonderfully illustrates how slave owning made for strange bedfellows. Here he was, placed in the position of defending an alleged advocate of Arminianism, the very disease he was so actively fighting to root out, against fellow evangelicals, some of whom were Northampton transplants who espoused Edwards’s Calvinist doctrine and method of revivalism. Nevertheless, a range of issues, ecclesiastical, political, and military, took precedence. Edwards upheld a high concept of the clergy as “ambassadors of Christ” that obliged him to come to the aid of a besieged fellow clergyman in order to restore deference and respect among the laity — a laity excited to occasional insurgency by the awakenings. Salary had long been a sore point between Edwards and his church, and he, like Doolittle before him, would soon come under attack for being “lavish” and of a “craving disposition.” In 1744, a number of his parishioners insisted upon an account of his own expenditures, an action suggesting the jealousy and resentment aroused by the family’s taste for jewelry, chocolate, Boston-made clothing, children’s toys — and slaves.

Edwards was indignant that his fellow clergyman was criticized for the supposed lavish lifestyle he enjoyed as a slave-owner. He wanted to discuss slavery as an abstract idea, not as a matter of pecuniary interest. What mattered, he insisted, was what the Bible said about slavery and the clear meaning of the many texts of scripture that affirmed it. Such arguments should be considered separate from, and unsullied by, talk of money.

This, too, is part of our inheritance. We like to think of “the Subject of Slavery” as distinct from the subject of wealth, but those things were inseparable. They still are.

Both are fascinating reads. Check them out if you’ve got a JStor account or access to a good academic library.

June 27, 2014 A little leaven leaveneth the whole lump (Unlearning the Lies, part 4)
Recent Comments
0 | Leave a Comment
Browse Our Archives
get the latest from
slacktivist
Sign up for our newsletter
POPULAR AT PATHEOS Progressive Christian
1