Who Would Jesus Sue? This week in weird religious copyright trolling

Who Would Jesus Sue? We saw a couple of suggested answers to that question this week is a pair of high-profile copyright cases pursued by some of my fellow Christians.

First up is this story from The Hollywood Reporter, which is dismaying on several different levels: “Tyler Perry Wins ‘What Would Jesus Do’ Trademark Battle.” Eriq Gardner reports:

The other contestant in this bout was Kimberly Kearney, who was once known as “Poprah” on the VH1 series, I Want to Work for Diddy.

In May 2008, Perry registered the [trademark] in the category of entertainment services, mentioning in his filing live concerts, a TV program and motion pictures. He included a disclaimer that he wasn’t attempting ownership on the exclusive right to use “Jesus” apart from “What Would Jesus Do.”

However, months earlier, Kearney had already filed for that same mark for a reality television program.

When her “What Would Jesus Do” mark was then published for opposition two years later, Tyler Perry Studios stepped forward to cancel it. Although Kearney had included in her registration a print-out of a web page calling for auditions on her show, Perry’s reps said that she wasn’t really using the mark. Perry demanded that the Trademark Office declare her registration abandoned as it was blocking his own attempts to turf out “What Would Jesus Do.”

So we have not one, but two parties vying to be the first to produce a reality TV show based, somehow, on the question “What Would Jesus Do?”

Episode One: What Would Jesus Do? Not this. Roll credits. End of series.

This involves more ironies than I could name or number, but let’s just list four of them. 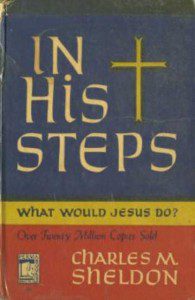 1. The answer to “What Would Jesus Do?” is probably never “Hire the best copyright attorneys to fight a high-profile public trademark dispute.” This is Paul, not Jesus, but it seems applicable: “To have lawsuits at all with one another is already a defeat for you.”

2. The question “What Would Jesus Do?” is an expression of the Christian idea of imitatio dei — the imitation of God. Trademark law is also about imitation — claiming a legal monopoly on a phrase to prohibit others from imitating it. It seems odd to sue someone else for imitating your slogan urging imitation.

3. This formulation of the phrase “What Would Jesus Do?” was available for trademarking because it wasn’t previously trademarked. It comes from Charles M. Sheldon’s 1896 book, In His Steps — an odd little book that I wish were read as widely as it is quoted from (you can read it here for free). Sheldon was a firm believer in the Social Gospel of Walter Rauschenbusch, and his book is an argument that one cannot ask “What Would Jesus Do?” without calling for societal justice and structural change. Another of his novels, The Heart of the World, deals with the late 19th-century labor movement and the violent suppression of it. (Sheldon’s argument is something like Nick Hanauer’s — the wealthy should support greater justice and equality, not just because that’s What Jesus Would Do, but because otherwise the working class will pick up their pitchforks and torches.)

In His Steps was a publishing phenomenon — one of the best-selling novels of all time. That success was due, in part, to its being printed and sold by dozens of different publishers. Sheldon’s publisher screwed up the paperwork and failed to properly copyright the book, so when other publishing houses saw how well it was selling, they rushed out their own editions and the book was everywhere. Sheldon saw that as providential — helping to spread the word, even though it cost him a fortune in royalties.

Sheldon never owned or sought a trademark for the phrase “What Would Jesus Do?” And now, 118 years after the publication of his book, that trademark belongs to Tyler Perry.

The second Big Christian Lawsuit this week is one of those music-industry deals. It seems that Christian rappers are suing Katy Perry for allegedly stealing their beats. The link there is to Hemant Mehta’s post, which includes video of “Joyful Noise” the unoriginally titled song recorded by Christian-brand hip-hop artist Flame in 2008, and the hit song “Dark Horse” by Katy Perry. (She’s not related to Tyler Perry — she was born Katy Hudson, which was the name she used back when she was a Christian-brand musician too.)

Hemant also includes this explanation, from Flame’s DJ, Cho’zyn Boy, of the musical passage in dispute:

What listeners are hearing is Katy Perry’s “Dark Horse” at 66 beats per minute and they’re hearing Flame’s “Joyful Noise” at 76 beats per minute. … When they’re separated, they seem a bit different, but when you bring them to the same tempo and you just change her pitch down one octave, they’re identical.

It’s true — if you modulate the pitch of the keyboard vamp in Perry’s song to match Flame’s, and then alter the tempo to the same rhythm, then they do start to sound suspiciously alike.

Play with the pitch and the rhythm a bit more and they both sound like the keyboard vamp from Jay-Z’s 1998 “Hard Knock Life (Ghetto Anthem).” Perhaps Flame, Lecrae and the rest of these litigious Christians should also consider suing Jay-Z for stealing their beats 10 years before they even wrote their song.

Jay-Z actually secured the rights to that keyboard vamp, from Charles Strouse — the composer of the musical Annie. The rapper fibbed a bit to make sure he’d have permission to use the music, but Strouse liked Jay-Z’s take on his song and gave his blessing.

So does that mean that Charles Strouse should be suing both Flame and Perry for further adapting his keyboard vamp, without credit? No, of course not, because Strouse is a class act.

Flame and Lecrae could learn a thing or two from Strouse about that. Or from Sara Bareilles, for that matter, who showed some class when fans claimed that Katy Perry’s “Roar” was a rip-off of her song “Brave.”

The silliest part of the Christian-brand artists’ lawsuit against Katy Perry is their attempted legal claim that she has “caused irreparable harm to Plaintiffs’ reputation.” How so? Well, because Perry’s song somehow associates theirs with “witchcraft, paganism, black magic, and Illuminati imagery.”

Nothing says “this is a rational legal claim” like an “Illuminati” reference. But they had me at “witchcraft.” No word yet on whether or not spectral evidence will be allowed in the case.

Most music-biz lawsuits are legally and artistically absurd and this one doesn’t seem any different. There are some exceptions, though, such as this one: