A whiskey priest is not the same as a Nazi

Roger Olson, bless him, approaches an interesting and important subject, then trips over it in a splendid pratfall. “Should a Theologian’s Life Affect How We Regard His/Her Theology?” Olson asks.

Olson begins, as many do when addressing this topic, with a discussion of Paul Tillich: “Reinhold Niebuhr was widely reported to have cut off his friendship with Tillich due to his observations of Tillich’s treatment of women students at Union Theological Seminary.” That enhances my admiration for Niebuhr and makes me even less inclined to give reading Tillich another shot. 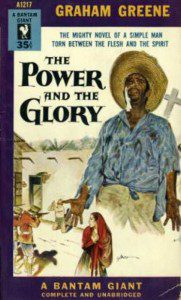 I’m not well-versed enough in Tillich’s theology to consider how his apparent mistreatment of women might be seen as either a cause or an effect of his ideas. But it seems unlikely that such reportedly habitual behavior can be wholly separated from his theology. “I usually don’t get into that when lecturing on Tillich,” Olson says. “I try to stick to his theology and those parts of his biography that directly relate to it.”

I agree with the attempt there, but I’m not as confident as Olson is that we can easily identify and isolate the “parts” of a person’s biography “that directly relate” to their theology. (The idea that some parts of our behavior might not relate to our theology is, itself, a theological claim.)

Olson moves on to address the problem of John Howard Yoder — a theologian whose books I have studied, learned from, and been inspired by. (You should see the enthusiastic marginalia on almost every page of my copy of The Politics of Jesus.)

And like many who learned from Yoder, I have had to re-examine what I learned in light of the disturbing revelations of the late theologian’s predatory sexual behavior. Olson minimizes this as “allegations about some sexual misdeeds that he admitted to. Some of them apparently involved women who felt he manipulated them sexually.”

Ugh. That’s ignorantly dismissive. These women did not “feel” that Yoder “manipulated” them. They testified that Yoder coerced them. That matters.

“The big lingering question for me,” Olson continues, “is whether I should try to set all that aside when reading Yoder and just focus on his ideas?”

At best, I think, we can try to read Yoder the way we try to read Thomas Jefferson — as someone who clearly stated worthy ideals, yet seemed blind to his own limitations in fully understanding or applying them. “We hold these truths to be self-evident, that all men are created equal, that they are endowed by their Creator with certain unalienable Rights, that among these are Life, Liberty and the pursuit of Happiness,” wrote Jefferson the slave-owner. “The renunciation of violence is an epistemology,” wrote Yoder the sex offender.

This is not a matter, as Olson seems to think, of fretting over the foibles and peccadilloes of great thinkers. It is, rather, a vitally important matter of identifying the way these men fell into the holes in their own thought so that we can avoid falling into those holes ourselves. We can’t shrug off Yoder’s sexual abuse or Jefferson’s slave-owning as, in Olson’s compartmentalizing phrase, “sides to their personal lives that we cannot be proud of.”

This “nobody’s perfect” or “God uses flawed people” dismissiveness leads to the kind of bizarre, morally deformed litany Olson then launches into:

The sad fact is that many, many great heroes of Christian history and theology had sides to their personal lives that we cannot be proud of. To what extent should those affect how we regard their theological contributions and contributions to church reform and renewal? Luther, of course, drank a lot of beer and advised others to do so as well. (His letter to a young friend named Jerome includes advice to drink much beer when the devil tells him not to!) He advised the German nobles to slaughter the rebelling peasants without mercy. He condoned Philip of Hesse’s bigamy. Toward the end of his life he fell into anti-Semitism and wrote essays against the Jews that were resurrected and used by the Nazis. John Knox, the reformer of Scotland, married a teenage girl when he was fifty. Ulrich Zwingli condoned the torture and drowning of Anabaptists — some of them his own former students. John Calvin condoned the execution of Servetus and publicly took responsibility for it. John Wesley couldn’t live with his wife; their marriage was, by all accounts, deeply troubled. Kierkegaard was not only eccentric but went out of his way to offend people including cutting off relations with his close relatives (including his brother who tried to have a good relationship with him). And he broke his engagement to his fiancée without explanation — a terrible faux pas at that time. Jonathan Edwards owned slaves.

Let’s just take the first example, Martin Luther. Here are three “sides of his personal life” that Olson regards as less than exemplary:

One of these things is not like the others. I suppose that Luther’s enthusiastic beer-drinking might, for some, fall into the category of a personal flaw (Luther himself didn’t see it that way), but it’s very, very different from the two other things Olson there presents as similar. First, of course, there’s the matter of severity. Olson here is conflating vice with evil, akrasia with murderous hate. These things should not be confused. They differ not just in degree, but in kind.

But we should also note that these latter “sides of Luther’s personal life” were not personal at all. His encouragement of the slaughter of peasants and his anti-Semitism were both public acts. These were acts toward others and acts that harmed others. That’s not his personal life.

And both reveal a great deal about the content and the substance of Luther’s theology. The fact that Luther “advised the German nobles to slaughter the rebelling peasants without mercy” tells you all you need to know about the coherence and utility of his “Two Kingdoms” political theology. And Luther’s anti-Semitism — apart from the grave consequence of aiding and abetting centuries of persecution and slaughter — also directly affected the very core of his theology of salvation by grace. Luther’s anti-Semitism was both a cause and an effect of his misunderstanding of “the Jews” in the New Testament, a misunderstanding that led him to perceive the first-century Judaism of Saul of Tarsus as identical to corrupt medieval Catholicism and thus to portray Paul as preaching against salvation by works. (The slow-motion explosion of the “new perspective” on Paul really means that much of Reformed theology is now Wile E. Coyote, still standing mid-air, unaware that the solid ground beneath him has been blown away.) Luther was an anti-Semite who admired Paul, and who thus reinvented Paul as an anti-Semite.

Can we “set all that aside when reading Luther and just focus on his ideas?” No. Because, as with Yoder and Jefferson, “all that” is interwoven throughout Luther’s ideas.

Were some of Luther’s ideas excellent despite “all that”? Yes. But that means it’s more important to focus on “all that,” not less, because it’s only by carefully, vigilantly seeking out the presence and the influence of “all that” that we have any hope of distilling those excellent ideas into something that won’t lead us to repeat Luther’s own grievous failures.

Alas, the remainder of Olson’s post continues the conflation of vice and genuine evil. A long discussion of (unnamed) “recent well-known theologians who were alcoholics” leads to this conclusion and horrifying transition:

If we were to discount the value of every theologian whose life was in some way scandalous our library shelves would be much less burdened down. And perhaps our theological thinking poorer. And I didn’t even mention all the German theologians and biblical scholars who supported National Socialism!

Having said all that, I have to add this. If those German theologians allowed their pro-Nazi sympathies to infect their writings we would all, I suspect, decline to use them in our courses. So, to the extent that a theologian allowed his infidelities, racial prejudices, wrong political views, to affect his scholarship, I believe we must inevitably either 1) discard his scholarship, or 2) use it but highlight those areas where the scandalous parts of his life affected it.

However, to the extent that the theologian’s scandalous actions did not affect his theology (or biblical scholarship) I see no reason to make much of them.

This is a bit better, but still naively unidirectional. Olson finally allows himself to imagine that it’s possible for a theologian’s “scandalous actions” to “affect his scholarship.” But he still doesn’t seem to appreciate that, just as often, those “scandalous actions” are a by-product of the scholar’s ideas.

The inability to recognize that cause and effect can flow both ways makes it unlikely that Olson will be able to “use it but highlight those areas” where the taint of this “scandalous action” can be identified as a discrete, separate compartment of thought. That’s not how humans work.

July 11, 2014 We dream a beautiful dream, we lose a beautiful thing
Recent Comments
0 | Leave a Comment
Browse Our Archives
Related posts from slacktivist