This Associated Press photograph by Jeff Robertson is astonishing. 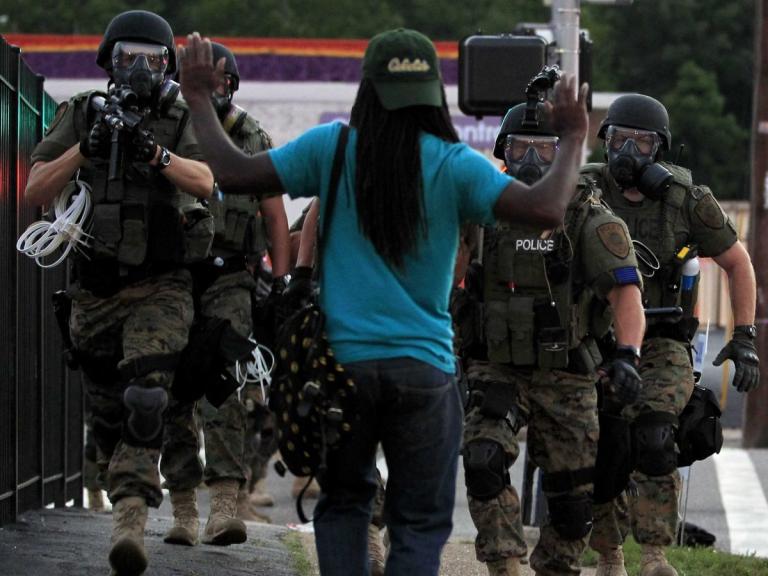 Here is a man — unarmed, unthreatening, hands in the air — standing on a public sidewalk. Advancing toward him are a half-dozen police officers in full military gear. Each carries multiple weapons and several have weapons drawn and pointed at the unarmed man.

Here’s the same scene from another angle: 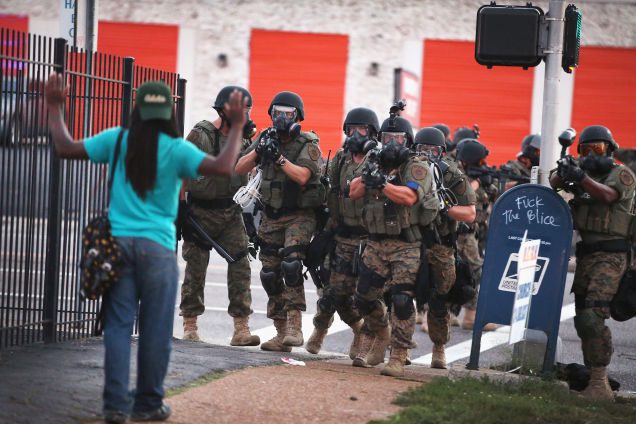 This is a military deployment. Yet there is no foreign army in Ferguson, Missouri — no Taliban, no Republican Guard, no Fedayeen, no Viet Cong. The only people in Ferguson are the citizens of Ferguson — American citizens in their American town.

Paul Szoldra notes that these police officers from a city of 21,000 are patrolling suburban American sidewalks carrying:

… short-barreled 5.56-mm rifles based on the military M4 carbine, with scopes that can accurately hit a target out to 500 meters. On their side they carry pistols. On their front, over their body armor, they carry at least four to six extra magazines, loaded with 30 rounds each.

… Their uniform would be mistaken for a soldier’s if it weren’t for their “Police” patches. They wear green tops, and pants fashioned after the U.S. Marine Corps MARPAT camouflage pattern.

“Why do these cops need MARPAT camo pants again,” I asked on Twitter this morning. One of the most interesting responses came from a follower who says he served in the Army’s 82nd Airborne Division: “We rolled lighter than that in an actual warzone.”

This is insane. This is absurd. This is a very, very, very bad idea. Whoever gave orders for this should be fired. Every officer who obeyed those orders — who picked up one of those military rifles agreeing that, yes, this would be a good thing to carry and to point at unarmed American civilians — should be suspended pending serious remedial retraining.

Oh, and those MARPAT camo pants? That’s not a uniform, that’s a costume. These boys are LARPing. We should take away their bullets and give them all 20-sided dice.

Matt Apuzzo wrote about the militarization of police earlier this year for The New York Times:

Congress created the military-transfer program in the early 1990s, when violent crime plagued America’s cities and the police felt outgunned by drug gangs. Today, crime has fallen to its lowest levels in a generation, the wars have wound down, and despite current fears, the number of domestic terrorist attacks has declined sharply from the 1960s and 1970s.

Police departments, though, are adding more firepower and military gear than ever. Some, especially in larger cities, have used federal grant money to buy armored cars and other tactical gear. And the free surplus program remains a favorite of many police chiefs who say they could otherwise not afford such equipment.

… During the Obama administration, according to Pentagon data, police departments have received tens of thousands of machine guns; nearly 200,000 ammunition magazines; thousands of pieces of camouflage and night-vision equipment; and hundreds of silencers, armored cars and aircraft.

The equipment has been added to the armories of police departments that already look and act like military units. Police SWAT teams are now deployed tens of thousands of times each year, increasingly for routine jobs. Masked, heavily armed police officers in Louisiana raided a nightclub in 2006 as part of a liquor inspection. In Florida in 2010, officers in SWAT gear and with guns drawn carried out raids on barbershops that mostly led only to charges of “barbering without a license.”

We need to amend the Third Amendment. This militarization of the police may not violate the letter of that law, but it obliterates the spirit of it.

August 12, 2014
Brittney Cooper on the slaying of Michael Brown, and others
Next Post