• “Another world is not only possible, she’s on the way and, on a quiet day, if you listen very carefully you can hear her breathe.”

• Joel Duff reviews Conversations on Geology: Comprising a Familiar Explanation of the Huttonian and Wernerian Systems; the Mosaic Geology, as Explained by Mr. Granville Penn; and the Late Discoveries of Professor Buckland, Humboldt, Dr. MacCulloch, and Others.

They just don’t title books like that anymore. And Mr. Granville Penn, I think, is what we’d get if Kurt Vonnegut had been a 19th-century creationist.

• A Cry for Justice — a blog about domestic violence and abuse in evangelical churches — recently posted a dismayingly perceptive piece describing the 11 steps to nowhere of “What a Victim Can Expect in a Typical Evangelical Church.”

Even more dismaying — take away some of the sectarian specifics and you’re left with “What a Victim Can Expect in Any Typical Institution.” The dynamic of institutional preservation — especially as described in Steps 9, 10 and 11 — reminds me of The Wire (it’s almost like part of the outline for Season 6). And just to be clear, when your institutional dynamics recall The Wire, that’s a Very Bad Thing.

• Groups like the American Family Association’s “One Million Moms” speak longingly of the lost innocence of the white Protestant hegemony of the 1950s America they imagine they’d grown up in. If One Million Moms had been around in the ’50s, I wonder if they’d have called one of their boycotts against Crunchie bars: 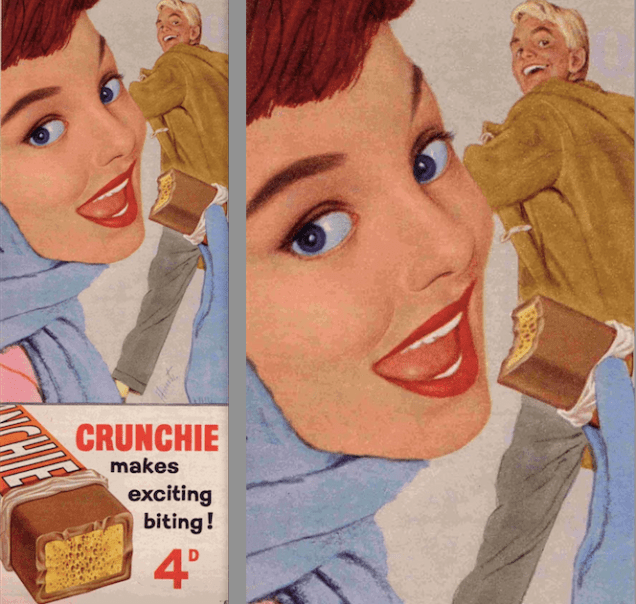 • “Say what you will about Harold Camping, but he didn’t get rich off of his crazy beliefs; instead, he lost everything in trying to be true to them. Without demonstrating any such willingness to be proven wrong (or right), Ken Ham nevertheless insists that his crazy beliefs are the only way to honor God and his word.”

• Competition is a market mechanism for keeping prices in check. That’s part of capitalism. Yet when the city of Somerset, Kentucky, took that rule of capitalism seriously, businesses that had previously enjoyed a price-gouging monopoly cried “Socialism!”

Businesses in a small Kentucky town are crying “socialism” after the mayor got tired of constant price gouging and opened a city-owned gas station.

According to the Associated Press, the Somerset Fuel Center was a hit with consumers when it opened [last month]. It served 75 customers in the first three hours, and has been averaging about 300 fill-ups per day ever since.

Mayor Eddie Girdler said that residents of Somerset … had complained for years about high gas prices, which the town estimated were 20 to 30 cents higher per gallon than surrounding cities.

So for less the $75,000, the city was able to open the fueling center, with 10 pumps and no frills. The station doesn’t sell snacks or do repairs.

While the mayor expected to break even on the operation, he said that the goal was to lower the overall price of gas in Somerset. And it seems to be working. Nearby stations had already cut prices by 10 cents.

Mayor Girdler didn’t take over the existing businesses. Nor did he try to impose price caps on them. He just expanded the market in which they have to compete by adding a public option. I like that idea, but like it or not, you can’t call that socialism.

August 27, 2014
Innocent? He was a violent thug -- a vandal who threatened to tear down a House of God
Next Post