This is ugly and hateful and very, very bad.

It’s from Charismanews.com — the website of Charisma magazine, Stephen Strang’s popular publication for Pentecostal and charismatic evangelical Christianity (via). Charisma has always ranged from conservative to reactionary, but this goes beyond that. This is eliminationist rhetoric — a call for ethnic and religious cleansing.

We’ve heard this before, too many times. We recognize this. This is what evil sounds like: “Why I Am Absolutely Islamophobic,” by Gary Cass.

Cass proposes “three possible solutions” to what he describes as the Muslim menace to the world. The first two are mass-conversion of all Muslims and mass-deportation — “Deport All Muslims Now” he urges:

Deport them like Spain was forced to do when they deported the Muslim Moors. Muslims in America are procreating at twice the rate of other groups. So either we force them all to get sterilized, or we wait for the “Army of Islam” to arise in our midst and do what Muslims always do, resort to violence.

But he’s already told us that he doesn’t think either of those ideas is satisfactory:

Here’s three possible solutions, but really there’s only one.

What he’s calling for, in other words, is the last of his three solutions. The final solution. Exactly that.

3. Violence. The only thing that is biblical and that 1,400 years of history has shown to work is overwhelming Christian just war and overwhelming self defense. Christian Generals Charles Martel in 732 and Jon Sobieski in 1672 defeated Islamic Turks and their attempts to take the West. Who will God raise up to save us this time? Will God even intervene or turn us over to the Muslims for turning against Him?

Either way, we must be prepared for the increase of terror at home and abroad. This is not irrational, but the loving thing we must do for our children and neighbors. First trust in God, then obtain a gun(s), learn to shoot, teach your kids the Christian doctrines of just war and self defense, create small cells of family and friends that you can rely on if some thing catastrophic happens and civil society suddenly melts down.

ISIS has done us all a favor. The true face of Islam is on full display even as Muhammad is burning in hell. We will have to face the harsh truth that radical Islam has no place in civilized society. Militant Muslims cannot live in a society based on Christian ideals of equality and liberty. They will always seek to harm us.

Now the only question is how many more dead bodies will have to pile up at home and abroad before we crush the vicious seed of Ishmael in Jesus’ Name? 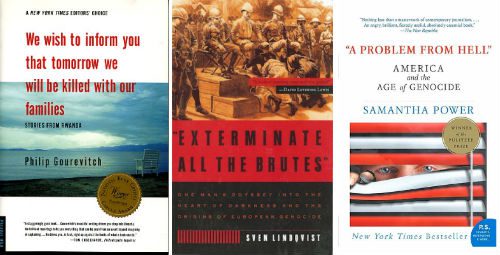 A “Christian” publication printed this. “Christian” editors approved it. And a “Christian” audience is lapping it up — applauding and “amen”-ing throughout the comments.

In Jesus name, this is pure blasphemy. That comment section might as well just be 200+ posts crying “No, not him! Give us Barabbas!” This is the very definition of what 1 John calls “the spirit of antichrist.”

Cass and Charisma are not merely “Islamophobic” — this is the language of genocide. This is Hutu radio stuff.

It’s also gasoline and a lit match. Cass is trying to incite violence.

Charisma’s editors seem dimly aware of that. They have no qualms providing a platform for those who advocate ethnic and religious cleansing. They have no reservations about amplifying such violence voices and their call too cut down the tall trees.

But they seem a bit wary about the potential liability that might come from publishing such a call for violence. So their front-page link to Cass’s bloody rallying cry hedges ever-so-slightly:

One minister has what he believes is a very rational fear for what our children and their children will face. Do you?

That won’t cut it. You can’t shake the devil’s hand and then pretend you’re just asking questions.

Charisma needs to take this column down, apologize and repent. And everyone there who touched this — solicited it, approved it, failed to resign in protest over the idea of it — needs to be fired. Twice.

Gary Cass has done us all a favor. The true face of Charisma magazine is on full display. We will have to face the harsh truth that radical right-wing Christianism has no place in civilized society. Militant Christianists cannot live in a society based on ideals of equality and liberty. They will always seek to harm others.

Feeling unknown and you're all alone
slacktivist
Related posts from slacktivist