Again, ‘liberal theology’ is not theology as done by people with ‘liberal’ politics

Again, ‘liberal theology’ is not theology as done by people with ‘liberal’ politics September 12, 2014 Fred Clark

“What Is ‘Liberal’ Theology?” Scot McKnight asks in a post that offers an important and immensely helpful distinction before, unfortunately, ending by blurring them in a less-helpful way. Let’s start with the helpful bit:

The words “liberal theology” refer to something, not to everything. When we use words to refer to everything, we end up with thinking that can’t distinguish anything from anything else and we look at the world with snowblind eyes too dazzled to make out what we’re seeing.

That’s one problem with the confused and confusing assumption that “liberal theology” means everything — everything that is not “conservative” theology. No. The jargon of political ideology can’t be applied to theology in this way — with “liberal” and “conservative” as neat binary opposites. That leads to a host of problems, among them:

1. The unexamined acceptance that anyone who claims to be “conservative” actually is so (and that being so is a Good Thing).

2. The indiscriminate use of “liberal” to describe anything and everything that is not perfectly aligned with the outlook of anyone who claims to be “conservative.”

3. The presumption that political conservatism — “standing athwart history, yelling Stop!” — is a necessary and sufficient expression of theological conservatism, leading to …

4. The assumption that conservative political litmus tests are useful as measures of theological orthodoxy.

No good can come from any of that. A great deal of Very Bad has come from all of that.

That is why liberal theology is no longer dominant. It didn’t lose a battle of ideas with some “conservative” opposite, it simply got all on board modernism and went down with the ship.

One weird result of failing to understand that is the current tendency in white evangelicalism to recoil in horror from the word “postmodern.” The prefix there — “post-” — is a chronological modifier referring to a chronological reality. That reality is denied by self-proclaimed “conservative” white evangelicals who reject anything they suspect of being “postmodern” because they regard postmodernism as, yes, “liberal theology.” (See, for example, the anti-postmodernist rant from “T.S.” in this discussion at Internet Monk.)

Postmodernism may be many things, but the one thing it cannot be is liberal theology. It is more precisely the opposite of liberal theology than any of the modernist or politicized “conservative” schemes that rush to condemn it. These so-called “conservatives” insist on identifying themselves as anti-postmodernists. This defiant, Wagstaffian anti-postmodernism means, of course, that what they wind up affirming is … well, modernism.

There’s a term for that — for the theological embrace of modernity and modernist epistemology, or what Roger Olson described as the “maximal acknowledgement of the claims of modern thought” in theology. Scot McKnight already reminded us what that term is: Liberal theology.

Yes, it’s also possible to be anti-postmodern without being modern by embracing something pre-modern, like Alasdair McIntyre or maybe Stanley Hauerwas. (Yes, I did the reading for this class.) But I’m not hearing a lot of Neo-Thomist arguments from these self-proclaimed “conservative” anti-postmodernists. I guess some of them think that Neo-Calvinist arguments will do the same pre-modern trick, but these Neo-Calvinists seem to embrace a form of Calvinism that is suspiciously modern.

This is why so many of the mid-20th-century theologians who lowered the casket on modernism still seem timely. Reinhold the Modernism Slayer Niebuhr is still sadly relevant in a white evangelical subculture that remains convinced that Francis Schaeffer contributed something coherent and meaningful by warning us of the menace of Kierkegaard.

The confused notion that “conservative” somehow equals anti-postmodern contributes to things like where McKnight’s discussion of “liberal theology” stumbles. I was enjoying and Amen-ing his post until I got to this bit, right after the bit quoted above:

… liberal theology is all about adjusting the Christian tradition to modernity. I give an example: it is liberal to believe the Bible is against same-sex relations and then to revise or correct what the Bible says about homosexuality on the basis of a more modern understanding of sexuality; it is not liberal to think the Bible, as a result of acceptable exegesis and historical work, originally did not condemn homosexuality as we know it today. I hope that distinguishes what liberalism means. It is to revise in light of modernity and cultural progress.

Consider, for instance, the assumption that “cultural progress” — whatever that may be — must always be separate from and opposed to biblical understanding. That’s a rather dismal accusation to make against the Bible and against Christianity as a whole. Again, I’m wholly convinced by Reinhold TMS’s critique of naive Rauschenbuschian optimism, but just because he overstated the potential for “Christianizing the Social Order” doesn’t mean we should, as McKnight implies, conclude that any increase in social justice entails a de-Christianizing of society.

McKnight’s suspicion and hostility toward “cultural progress” there seems to reflect the pernicious, pervasive idea we discussed here back in July: 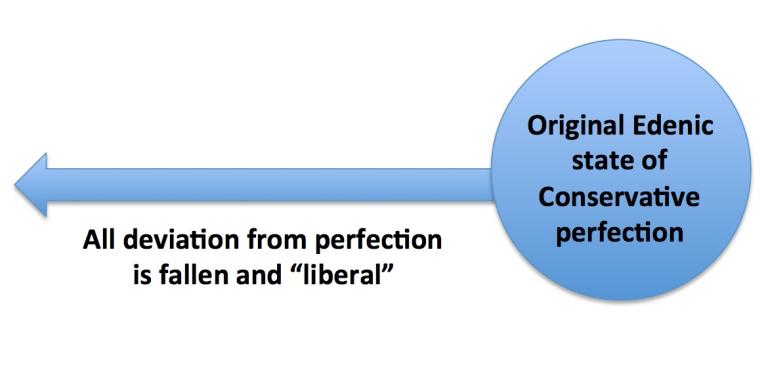 This is, as I wrote then, an ideology that guarantees you will never learn anything — “an efficient machine for manufacturing stupid.” It says learning is bad — that learning is impossible because it isn’t learning at all, just a gradual drifting away from the original state of perfect knowledge.

Ugh, no. We shouldn’t assume, as modernism naively did, that more information and more education can solve everything. But that does not mean we should reject information and education — “cultural progress” — as harmful.

The bigger problem with McKnight’s example is the irony of what he offers as a “non-liberal” approach to human sexuality: “It is not liberal to think the Bible, as a result of acceptable exegesis and historical work, originally did not condemn homosexuality as we know it today.”

The tools he commends there — “acceptable exegesis and historical work” — are the quintessential tools of modern, liberal theology. He is hoping that better exegesis will lead to better justice, but again, “we can’t exegete our way to justice.” (The link there is to my earlier post, “Without justice, we’re not reading the same book,” which I suppose you could describe as “postmodern” in that it’s somewhat Barth-ish.) I’m not so much arguing against this determinedly modern effort to exegete our way to justice as I am just pointing out the sheer reality of that chronological prefix “post-.” We tried that. It didn’t work.

McKnight offers us a binary choice between two approaches to human sexuality. Both are squarely modern. We can, he suggests, either “revise or correct what the Bible says about homosexuality on the basis of a more modern understanding of sexuality” or else we can use the tools of modern scholarship to revise or correct what we think the Bible says.

I did not become an LGBT-affirming Christian because of some scholarly research on the best way to translate “arsenokoitai” or because I learned to interpret Romans 1:26-27 in the larger context of the surrounding sentences in Romans 1:18-2:16. Nor did I come to see the full equality of women in society and in the church as a Good Thing due to the excellent exegetical work of folks like Scot McKnight in interpreting 1 Timothy 2:12. All of that is fascinating, but ultimately beside the point.

Instead, I am slowly learning — and re-learning — to read the Bible the way that St. Augustine taught us to way back in On Christian Doctrine:

Whoever, then, thinks that [they] understand the Holy Scriptures, or any part of them, but puts such an interpretation upon them as does not tend to build up this twofold love of God and our neighbor, does not yet understand them as [they] ought.

The more I learn to do this — to make the “twofold love of God and our neighbor” the guiding star of what the Bible means — the more I find that I am accused of “liberal theology.” But that is not what those words mean.

If you’re defining “conservative theology” in any way that puts such an interpretation upon the Holy Scriptures as does not tend to build up this twofold love of God and our neighbor, then you do not yet understand those Holy Scriptures as you ought.

September 12, 2014
I thought I was going to Heaven, now it's very hard to tell
Next Post

September 14, 2014 The Satanic Panic arose from abortion politics
Recent Comments
0 | Leave a Comment
Browse Our Archives
get the latest from
slacktivist
Sign up for our newsletter
POPULAR AT PATHEOS Progressive Christian
1