Salvation at the gift shop

• Red states and blue states: “We now seem to be living in two geographically separate nations: one scalded by unbearable heat, the other bitten by waves of unusual cold.” I liked the old jet stream better.

• From what I saw on Twitter, it seems that Pacifist Fred Armisen did a good job in his debate with Cranky White Geraldo. 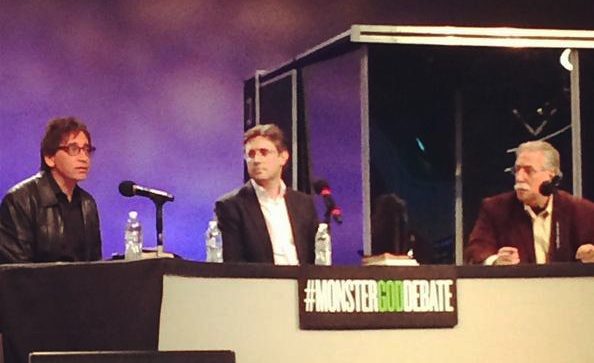 • “None of us glorifies war,” said Robert George, Eric Metaxas and Marty Peretz, before congratulating one another for saying it with a straight face, then resuming what they’ve all done for the past several decades: glorifying war.

Question: And what if you do not fear God, nor love him, nor seek to please him?

Answer: Then I shall be a wicked Child, and the great God will be very angry with me.

I absolutely want that answer on a T-shirt. Maybe on business cards.*

The “shall” in that response strikes a note of resolve that makes the whole thing remind me of Huckleberry Finn’s “All right, then, I’ll go to Hell.” That moment of accepting the Puritan’s damnation was actually the moment of Huck’s salvation.

It’s not just that Watts’ catechism is inappropriate for small children, but that its theology of a “very angry” God seems inappropriate for everyone. If that theology insists that to be a non-Puritan is to be a “wicked Child,” well then, very well, I shall be a wicked Child. (But I do not think that word means what Watts thought it means.)

• Pop quiz: Which Patheos blogger is being described in this eyewitness account of a recent social gathering? “_________ just reached back and started clocking him. … Reached way back here and caught him right in the chin, like, you know, I counted at least six times.”

• Saving the USPS, helping the working class, and hurting predatory lenders all sound like Good Things to me. We need the Bailey Bros. Building & Loan here in Potterville, and since the private sector has no interest in providing that modest service to people of modest means, then, yes, let’s let the Post Office do it.

* This item updated, amplified and, I hope, clarified.