Since Hollywood is putting out a movie to celebrate 11 years of Left-Behind blogging, let’s get retro. Here’s a chance for new comment threads on old posts. Back where we started from, here we go ’round again.

The first words of Left Behind are “Rayford Steele,” the protagonist’s name. 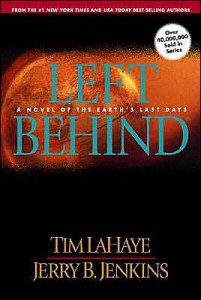 Note that Tim LaHaye’s wife is something of a professional misogynist. She runs the 500,000-member “Concerned Women for America” — jokingly referred to by its critics as “Ladies Against Women.” For years, while Beverly LaHaye’s husband pastored a church in San Diego, Mrs. L. spent most of her time 3,000 miles away, in Washington, D.C., running a large organization committed to, among other things, telling women they should stay at home and sacrifice their careers for their husbands. She is not an ironic woman and doesn’t seem to find any of this inconsistent. (Nor, as I found out firsthand, does she appreciate jokes about the Freudian implications of the view from her L’Enfante Plaza office window. Sometimes the Washington Monument is just a cigar.)

The character Rayford Steele is, like the authors, no longer a young man. Younger authors might not have been compelled to give their protagonists names — “Steele” and “Buck” — that seem such a blatant assertion of male virility. Bev is apparently not the only LaHaye who seems oblivious to phallic imagery.

If you’re thinking I’m reading too much into all this, that this theme isn’t really as present in the text as I’m making it out to be, consider the opening lines:

Rayford Steele’s mind was on a woman he had never touched. With his fully loaded 747 on autopilot …

The name of the woman about whom Steele is fantasizing is “Hattie Durham.” (Eldridge Cleaver could have written volumes trying to unpack all the Southern sexual myths crammed into that name.)

A paragraph later we read that Steele’s wife, Irene, was “attractive and vivacious enough, even at 40.” The authors do not say “enough” for what, but the choice of adjectives — the first description we have of Irene — is tellingly reductive. Then there’s that “even at 40.” L&J would not approve of an older, steely, fully loaded man betraying his wife for a younger trophy bride — but they sure seem to appreciate the impulse.

Irene’s 40-ish attractiveness cannot compete with Hattie’s youthful good looks. The first thing L&J tell us about any female character is whether or not she is attractive. Hattie is, they tell us, “drop dead gorgeous.” Like so much in this book, Hattie’s beauty eludes the authors’ powers of description, forcing them to fall back on cliche. There are enough hackneyed phrases in the first chapter of this book for a whole album of Bon Jovi songs.

Despite L&J telling us that Steele’s “libido” had “caused his mind to wander” (aha — somebody has been reading Freud!), their description of Steele’s behavior toward Miss Durham betrays another motive at work:

Steele’s “libido” seems firmly in check. He keeps it — like Hattie — subservient to his need for emotional dominance. Throughout the book, Rayford keeps Hattie in her place — waiting for signals from him, but always withholding those signals. The authors seem to regard this as a sign of Steele’s virtue and self control, but it reads more like something deeply kinked and cruel. He gets off on this.

On the third page of the book we read:

He was no prude, but Rayford had never been unfaithful to Irene. He’d had plenty of opportunities. He had long felt guilty about a private necking session he enjoyed at a company Christmas party more than 12 years before. Irene had stayed home, uncomfortably past her ninth month carrying their surprise tagalong son, Ray Jr.

By this point, Rayford Steele’s warped sexuality — the book’s primary theme thus far — has become so blatant that one begins to hope the authors are attempting something more subtle and artful. Perhaps Steele is an antihero — an unreliable narrator like something out of Nabakov? (The voice is not first person, but our omniscient narrator is, so far, focused on Steele’s P.O.V.)

But little in the rest of the book supports such a view. The only unreliable narrators here are the authors themselves, apparently agreeing with Steele that his “private necking session” (who talks like this?) with a nameless, undescribed, inconsequential female does not constitute “unfaithfulness” to his pregnant wife.

September 26, 2014 Scenes from the class war
Recent Comments
0 | Leave a Comment
Browse Our Archives
get the latest from
slacktivist
Sign up for our newsletter
POPULAR AT PATHEOS Progressive Christian
1