Mr. Chesterton, Tear down that fence! (more on ‘accommodating the prevailing culture’)

Having said all of that in the previous post, let me say also that I respect that conservative impulse to defend the prevailing culture. Prudence is not the only virtue, but it is a virtue, and there is important and necessary wisdom in the conservative prudence that insists the burden of proof should rest with those who seek change. As the wise and prudent conservative Wendell Berry puts it, “If you must tinker, keep all the parts.”

Take care, conservatives caution, lest we make some unalterable change that winds up making things worse. That’s good advice. It’s always better to take care than not to.

The problem arises when this principle becomes the primary or exclusive rule. Fear of change that might make things worse thus becomes the main motivation, and fear is not the same as taking care. An admirable conservative prudence can ossify into opposition to any change of anything at any time. If change sometimes results in making things worse, the thinking goes, then we can prevent that from ever happening by resisting all change.

That puts conservatives in an untenable position when circumstances change around them — when the status quo they won’t allow to change turns out to be unsustainable. When the waters around you have grown, then the status quo of the prevailing culture needs to adapt — start swimming or sink like a stone. 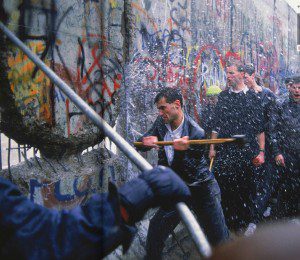 Healthy, prudent conservatism does not rule out the possibility of change, growth, reform, or even revolution. It insists only that such change be done with great care.

“Don’t ever take a fence down until you know the reason it was put up,” G.K. Chesterton recently posted to his quotes page on GoodReads.*

That’s an excellent capsule-summary of conservatism. And it’s good advice.

But Chesterton’s maxim works backwards as well as forwards. If we come to know that there’s no good reason for the fence — or only bad reasons for it — then we’re obliged to take it down.

That fence is the prevailing culture.

People on the other side of that fence have been studying it for a long time now. They’ve studied the history of it. They’ve read the biographies and philosophies of the men who built it, the clergy who prayed for it, the armies that defended it and the financiers who funded it. They’ve examined the structures and the mechanisms that have maintained the fence, and the pervasive cultural ideologies that have supported and defended its presence for all these years. They have explored all the justifications and rationales and explanations of the very best arguments for the invention, construction and persistence of that fence.

And everything they have seen and learned has led to a single clear conclusion: That fence exists to keep people out.

Women. People of color. The poor. Sexual minorities. Religious minorities. The fence was built to keep them in their place.

We know it’s long past time to tear down that fence.

* Yes, I know. But I’m still making fun of Chelsen Vicari’s execrably nasty and sloppy hatchet-job Distortion. I will probably do so for some time because: A) Vicari and the IRD dishonestly attack several of my friends, by name, and B) they rudely neglected to include me in their rogue’s gallery of “New Christian Leftists.”

October 1, 2014
If you're fighting to preserve the status quo, you cannot accuse those who seek to change it of 'accommodating to the prevailing culture'
Next Post