‘Left Behind’: The Critics Speak (and weep, and snicker …)

Anticipation is building for the premillennial dispensationalist movie event of the year. Left Behind arrives in theaters tomorrow, but today, we get the reviews. 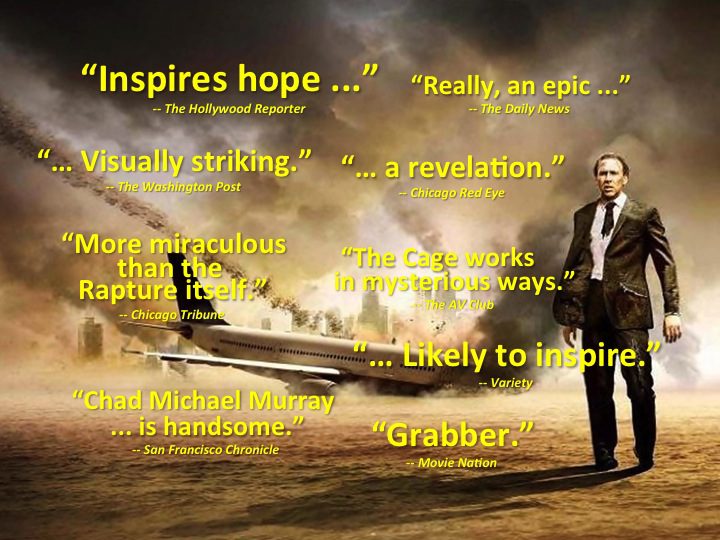 With so much emphasis on proselytizing, there’s little energy remaining for, you know, characters, plotting, dialogue … pacing … It takes upwards of 30 minutes to reach the inciting incident.

Seriously, 30-plus minutes to get to the thing we all know is gonna happen. Antsy viewers will be praying for the Rapture by 10 minutes. …

Babies disappear on flying planes and parents object, but don’t tear around the aisles screaming or, say, look under the seats. People suddenly reveal themselves behind curtains to have Xanax-calm conversations. …

That lack of concern for the way people actually interact renders the film useless as entertainment, or as a conversion tool.

• Matt Pais, RedEye, “Left Behind is the year’s funniest movie”

… a movie so astonishingly, hilariously incompetent that nothing I say can prepare you for it. This movie is the worst. And the best. I haven’t laughed like that in a theater in a long, long time, and not one of those laughs was earned on purpose.

… I love that all Buck eventually is good for is pressing “redial,” and the suggestion that a plane can’t land unless a port-a-potty is out of the way. I love that … Chloe, no joke, does something that reminded me of both Wet Hot American Summer and The Great Muppet Caper.

Really, I cannot believe this movie exists, but I’m so glad it does.

The Rapture won’t come soon enough for the unfortunate souls forced to suffer through Left Behind, the big screen reboot of the direct-to-video, faith-based film series starring Kirk Cameron. Essentially playing like a spoof of ‘70s era disaster movies, this adaptation of the mega-selling books written by Jerry B. Jenkins and Tim LaHaye demonstrates that a bigger budget and a bigger star (Nicolas Cage) doesn’t necessarily make ridiculous material any more palatable.

With a Sharknado-inspired visual style and a deeply weary lead performance from Nicolas Cage, Left Behind is cheap-looking, overwrought kitsch of the most unintentionally hilarious order, its eschatological bent representing its only real shot at box office redemption. The film hits theaters this weekend, but as for when believers can expect to see the tenets of their faith reflected with any sort of sophistication or intelligence in a mainstream genre film, we still know neither the day nor the hour.

… Its spirituality manages to be both irritatingly sanctimonious and doctrinally vague; viewers who go into the film unfamiliar with the contentious Scriptural interpretations behind the series’ apocalyptic visions will leave scarcely better informed at the end.

… if you’re going to make a movie about Christian eschatology that shoots for the mainstream, at least make it frightening, if you can’t make it fun.

Left Behind takes the end of the world and turns it not into a nightmare, but a nice long nap.

Cage is going for manly, if conflicted, family-guy confidence in this role, but somehow it comes off as nuttier than the events surrounding him. Not since Dean Martin in Airport has a commercial flight been under the command of a less sober-seeming presence. I did like the bit, however, where Chloe, down on the runway at night, the world in cheaply digitized flames, guides dad’s now-flaming wreck of a plane home with the help of her high-beams. It’s more miraculous than the Rapture itself.

• A.A. Dowd, The A.V. Club, “God only knows how they made a worse version of Left Behind“

One need not be a Godless heathen to find fault in Left Behind’s message-delivery system: It’s a fire-and-brimstone sermon wrapped in the tissue of a bad disaster thriller — a criticism that’s dogged the book series since its earliest installments. But this adaptation is so broad, cartoonish, and ineptly made that harping on its theological methods seems like overkill. … This Left Behind may be worse than the last Left Behind, but it’s much less boring, thanks in part to the commitment of its star, who plays the often ludicrous material with the straightest of faces. The Cage works in mysterious ways.

October 1, 2014
First two reviews for 'Left Behind'
Next Post