Wherein we first encounter the Greatest Investigative Reporter of All Time, first realize that the co-authors of these books are represented by the dual protagonists as their fantasy surrogates, and wherein we make our first Cam-Cam reference.

I grew up in Jersey, so I’m a long-time admirer of Buck Williams. The man was a rebounding machine — dominating the NBA boards for a decade, pulling down more than 13,000 rebounds (No. 12 on the all-time list). Williams is still the Nets all-time leading scorer and rebounder. So who did they get for him in the trade with Portland? Freaking Sam Bowie. Great trade guys. 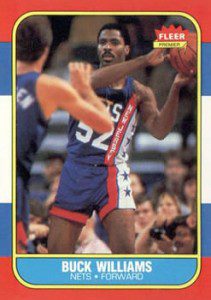 LaHaye and Jenkins, of course, don’t mean that Buck Williams. Like Bill Russell, he doesn’t appear in this book at all. Which makes sense, since this story takes place after God has already snatched away his team. The Almighty knows that offense wins headlines, but defense wins championships.

The Buck Williams of Left Behind is even more of a superstar. He’s a kind of journalistic James Bond. The Greatest Investigative Reporter of All Time.

Note that the dual authors have given us dual protagonists.

Rayford Steele — the virile, sexually obsessed but chaste hero pilot — seems to be Tim LaHaye’s fantasy wish-fulfillment stand-in. Cameron “Buck” Williams seems to represent the dream self of Jerry B. Jenkins. The aging hack ghostwriter of subculture genre fiction transforms himself into a world-famous, Pulitzer-winning, super-journalist admired by writers and desired by women everywhere.