‘Are we capable of welcoming these people?’

‘Are we capable of welcoming these people?’ October 15, 2014 Fred Clark

The relatio of the Vatican’s Synod on the Family asks a very important question: “Are we capable of welcoming these people?”

That is, and has always been, an inescapable question for the church. The particulars of who we mean by “these people” may change in different times and circumstances, but the question itself has always been there, ever since Pentecost.

And before Pentecost, even. This question arose before there ever was any such thing as the church or a church or “Christians.” Jesus himself had to answer this question.

And Jesus got it wrong — at first, anyway.

You may remember this story. It’s pretty memorable, since it’s the only story in the Gospels in which Jesus loses an argument. Here’s how that story starts in Matthew’s Gospel:

Jesus left that place and went away to the district of Tyre and Sidon. Just then a Canaanite woman from that region came out and started shouting, “Have mercy on me, Lord, Son of David; my daughter is tormented by a demon.”

But he did not answer her at all. And his disciples came and urged him, saying, “Send her away, for she keeps shouting after us.”

He answered, “I was sent only to the lost sheep of the house of Israel.”

But she came and knelt before him, saying, “Lord, help me.”

He answered, “It is not fair to take the children’s food and throw it to the dogs.”

“Are you capable of welcoming people like us?” the woman asked Jesus. And he said No.

He said it nicely, at first. He explained to her that a religious principle was at stake here, and that this principle — wholly defensible according to scripture and tradition — made it clear that he was only capable of welcoming a certain kind of people. Not her kind of people, sorry. Rules are rules. 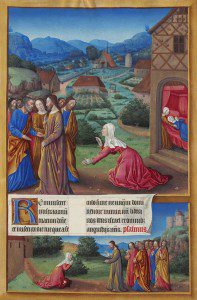 But then, when she wouldn’t take no for an answer, he gets kind of harsh. He tells her she’s a dog — an unclean animal that doesn’t deserve a place at the table.

In Jesus’ defense, this was exactly the kind of thing he’d been trying to get away from, so it’s understandable that he might be a bit testy. He’s supposed to be off the clock, on a well-earned vacation. He’s just gone to great lengths to get away from all of this — fleeing to another country, for his sake. The version of this story in Mark’s Gospel says Jesus “did not want anyone to know he was there, yet he could not escape notice.” And he sounds like that here. He sounds like someone who needs to get away, but finds he can’t escape.

But it doesn’t really matter if his tone is harsh. His tone is irrelevant.

Tone is always irrelevant when you’re telling someone that you are not capable of welcoming people like them. It’s never possible to exclude people nicely. It’s the act that wounds, not the words that dress it up.

Jesus is telling this woman that he is not capable of welcoming her. He is telling her that he will not heal her sick daughter. No words can make that worse and no words can make it better. Wrap it up in the kindest, sweetest words imaginable and her daughter is still going to die. Calling her a dog on top of that can’t make her pain appreciably worse.

“Are you capable of welcoming people like us?” the woman asked.

“No,” Jesus said. “It is not fair to take the children’s food and throw it to the dogs.”

And she didn’t blink, she didn’t back down. “Well, then,” she asked, “are you capable of welcoming ‘dogs’ like us?”

But she came and knelt before him, saying, “Lord, help me.”

He answered, “It is not fair to take the children’s food and throw it to the dogs.”

She said, “Yes, Lord, yet even the dogs eat the crumbs that fall from their masters’ table.”

Then Jesus answered her, “Woman, great is your faith! Let it be done for you as you wish.” And her daughter was healed instantly.

Or maybe you read that story and you think that must have been what Jesus intended to do all along. Maybe he was just testing this woman’s faith.

Or maybe he was teaching his disciples a lesson. “Send her away,” they told him. Send her away because we are not capable of welcoming those people, they thought. And maybe Jesus wanted to show them that this was the wrong answer before he showed them what the right answer looked like.

When the question is “Are we capable of welcoming these people?,” then “No” is always the wrong answer.

Don’t take my word for it. See for yourself. Read all of the stories that follow this story in the Bible and see how they answer this question.

Now there were devout Jews from every nation under heaven living in Jerusalem. … Parthians, Medes, Elamites, and residents of Mesopotamia, Judea and Cappadocia, Pontus and Asia, Phrygia and Pamphylia, Egypt and the parts of Libya belonging to Cyrene, and visitors from Rome, both Jews and proselytes, Cretans and Arabs …

Yes. “Each one heard them speaking in the native language of each,” saying, “God declares, that I will pour out my Spirit upon all flesh.”

Now during those days, when the disciples were increasing in number, the Hellenists complained against the Hebrews because their widows were being neglected in the daily distribution of food.

Yes. And so they appointed the first deacons — all apparently Hellenists themselves — and corrected the injustice.

Philip the Evangelist took that whole business about “all flesh” very seriously, and so right after Pentecost he made a beeline for Samaria — the unclean capital of uncleanness.

Samaritans? Are we capable of welcoming these people?

Yes. And “there was great joy in that city.”

How about an uncircumcised soldier of imperial Rome? Are we capable of welcoming those people?

Peter considers this a tough question. The scriptures, he notes, are very clear on this point and we can’t just …

So God knocks him out and gives him a vision, repeating it three times before the uncircumcised gentiles knock on Peter’s door. And then he finally gets it.