This is a big deal: David Gushee’s ‘Changing Our Mind’

As he writes in that foreword:

When I “came out” as a married heterosexual evangelical pastor who had changed my mind on LGBT equality, I received hate mail that I still wince to remember. Friendships ended. Major evangelical magazines put me on their black list. I found that there are theological bullies in the evangelical world who don’t mind throwing their weight around. Speaking invitations and friendly welcomes dried up in places where I had formerly felt welcome and at home.

For years now, white evangelicals have been told that McLaren is someone they shouldn’t listen to — someone they’re not allowed to listen to. His arguments weren’t rejected, they were simply dismissed without being heard. McLaren, the tribal gatekeepers said, no longer counted as One of Us, and therefore whatever it was he had to say no longer mattered.

Changing Our Mind also has a preface. That’s by Phyllis Tickle, and that’s also pretty cool. Tickle is well-respected as a thoughtful leader and teacher in the emergent church movement. But the emergent church, like McLaren, is officially suspect and controversial because it’s, like, postmodern or something, and therefore dangerous. Plus, you know, she’s a woman. So the tribal gatekeepers won’t hesitate to pre-emptively dismiss and delegitimize whatever she has to say.

The book’s introduction — yes, it has all three — is written by Matthew Vines. Also cool. Vines is whip-smart and undeniably reveres the Bible. But Vines is young, and gay, and for the past year the tribal gatekeepers have been ferociously trying to muzzle him by delegitimizing him as some kind of outsider or interloper or threat.

The rest of Changing Our Mind, though — the book itself — was written by David Gushee. Gushee is a conservative evangelical ethicist with impeccable academic credentials and impeccable tribal credentials. He’s someone the gatekeepers themselves have praised and celebrated and recommended for years.

And that makes this book a pretty big deal. That means this book, and its argument, will have to be contended with and not just pre-emptively dismissed as the handiwork of some controversial, “post”-whatever outsider.

Jonathan Merritt discusses the significance of this in a sharp Religion News Service report published in The Washington Post and other newspapers, “Evangelical ethicist David Gushee is now pro-LGBT. Here’s why it matters“:

David Gushee, a professor of Christian ethics at Mercer University, a Baptist-rooted college and divinity school in Georgia, plans to announce that he now affirms same-sex relationships in a speech to The Reformation Project conference, a gathering of pro-LGBT Christians in Washington, on Nov. 8. … 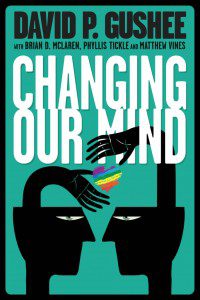 Gushee also has penned a book that makes a biblical and philosophical case for LGBT affirmation. The volume, titled Changing Our Mind: A Call from America’s Leading Evangelical Ethics Scholar for Full Acceptance of LGBT Christians in the Church, will be released by David Crumm Media prior to the speech. …

It is difficult to overstate the potential impact of Gushee’s defection. His Christian ethics textbook, Kingdom Ethics, co-authored with the late Glen Stassen, is widely respected and was named a 2004 Christianity Today book of the year. He serves as theologian-in-residence for the Cooperative Baptist Fellowship, a coalition of 15 theological schools, 150 ministries, and 1,800 Baptist churches nationwide.

While other pro-LGBT Christian activists — including Justin Lee of the Gay Christian Network and Matthew Vines, author of God and the Gay Christian — have been dismissed in some circles as wet-behind-the-ears youngsters without formal theological training, Gushee, 52, is a scholar with impeccable credentials. He can add intellectual heft to what has largely been a youth-led movement, and is not someone who can be easily dismissed.

Of course, just because he is “not someone who can be easily dismissed,” doesn’t mean the tribal gatekeepers won’t try to dismiss him. That’s their only option, really, because otherwise they’d have to respond to his arguments.

That attempted dismissal and “farewell” anathematizing has already begun — even before we get to the end of Merritt’s article:

Gushee’s decamping will likely be seen as treasonous by conservative colleagues, including the Rev. R. Albert Mohler Jr., president of the Southern Baptist Theological Seminary, where Gushee taught in the 1990s. While Mohler said the decision is “tragic and causes me real grief,” the two have had ongoing disagreements dating back to Gushee’s time on the Louisville, Ky., campus.

“It was clear early on that he and I, and he and Southern Seminary, were moving in different directions, and those who’ve been watching David’s trajectory will see this as a logical conclusion,” Mohler said. “He’s now placed himself outside of employability at the previous institutions where he taught.”

If you read that last sentence as simply a description of Gushee’s relationship to his former institutional homes, then you’re missing Mohler’s point. That sentence isn’t his response to Gushee — it’s his threat to anybody who might dare to associate with him in the future, to anybody who might employ him, invite him to speak, publish his writing, or break bread with him (at their own table or at the Lord’s table). That’s the pope of Avignon, Kentucky, issuing a formal fatwa.

The problem for Mohler is that many of the people he’s threatening there have, in fact, “been watching David’s trajectory” over the years. They’ve been reading his many books and articles and they’ve been impressed by his thoughtfulness. They’re grateful for his insights, and for helping them to think Christianly about a great many things over the years. The suggestion that they must now, suddenly and abruptly, stop listening to him completely will strike many of them as odd. It may even make them curious.

I suspect a great many such people will also notice what you’ve probably already noticed about Mohler’s reflexive anathematizing of dissent. It betrays an utter lack of confidence in his own side of the argument. Nobody flips over the board and storms away from the table if they think they’re winning.