A change of tone requires a change of substance: Southern Baptists learning that others can hear them talk

A change of tone requires a change of substance: Southern Baptists learning that others can hear them talk November 3, 2014 Fred Clark

One phrase that came up again and again when the Southern Baptist Convention named its new spokesman was “media savvy.” Richard Land, who served for decades as chief of the SBC’s Ethics & Religious Liberty Commission, was a media dinosaur. Russell Moore, who replaced him as the denomination’s primary public face, seemed to have a much better grasp of social media and the Internet.

Being more “media savvy” than Richard Land sets the bar pretty low. This was a guy, after all, who repeatedly shot himself in the foot while using the century-old media of radio. Land never seemed to understand that, on the radio, anybody might be listening. He seemed genuinely surprised when his appalling comments on the killing of Trayvon Martin were overheard by the kind of people he didn’t expect he’d ever encounter — which is to say, by people who would see those comments as appalling.

Land never seemed to appreciate the difference between the public platform of his radio show and the back room of a white’s only old boy’s club. He got himself in trouble for talking in public the way that some white people talk about black people when they’re confident that only white people are in the room. Or the way that multi-millionaires talk about the 47/99 percent when they forget that its not just their fellow multi-millionaires in the room. 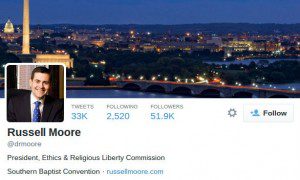 Russell Moore, on the other hand, seems to understand that in the digital age its best to speak as though everything you say is being heard by everyone. He seems to get that those other people you’re talking about can hear you.

That, I think, is the basis for that description of Moore as “media savvy.” It’s not that he’s some kind of manipulative whiz at social-media marketing, but just that he’s been on the Web and on Twitter long enough to understand that anything one posts or tweets might wind up reposted or retweeted anywhere, and might be read by anyone. So Moore, to his credit, makes an effort not to talk about other people or other groups as though they weren’t in the room, listening.

And that, I think, is what accounts for Moore’s apparent effort to “change the tone” of Southern Baptist rhetoric toward LGBT people.

“Southern Baptists change their tone but not their substance on homosexuality,” Jacob Lupfer wrote for Religion News Service last week at the conclusion of the ERLC’s big conference on “The Gospel, Homosexuality, and the Future of Marriage” in Nashville. Lupfer writes of a general shift to a “kinder, gentler opposition to homosexuality”:

The tone at the conference was more gracious than seen in previous generations. While stopping well short of affirmation, most speakers tried to be as conciliatory as their worldviews allow. Most deliberately avoided the crude language of figures like Duck Dynasty’s Phil Robertson. At an April summit, leaders pledged to avoid the “redneck theology” of “Adam-and-Steve” jokes. In general, that lesson seems to have sunk in. Also, there was surprisingly little talk of hellfire-and-brimstone.

Also for RNS, Sarah Pulliam Bailey described a tone of greater mutual friendliness between SBC activists and LGBT advocates at the conference:

When Southern Baptists convened a national conference here this week to discuss issues of human sexuality, bringing conservative evangelicals and LGBT Christian activists into the same ballroom was a recipe ripe for potential fireworks.

Perhaps the most shocking thing was how few fireworks there were.

But there were fireworks, though, on Twitter. The conference was livestreamed on the Internet and the #ERLC hashtag promoted by conference organizers soon became a fascinating, contentious conversation that included both the anti-gay SBC faithful and the people they’d expected to be talking about but not talking to. That was particularly true during the conference presentations by the many speakers who didn’t seem to get Moore’s memo about a kinder, gentler tone.

Some of the SBC conferees became defensive and indignant that their Twitter conversation was being “hijacked” by these interlopers. Like old Richard Land, they seemed surprised and discomfited to realize Those People were, in a sense, there in the room with them, listening to what was being said. Some were, like Moore, able to make that adjustment — learning the importance of speaking about others in a way that assumes they can hear you. Some others, like Land, still struggle with that concept.

What I find most interesting in this is the way the SBC seems to be learning — slowly — that some of the things it has been saying about LGBT people can no longer be said once they recognize that it’s being heard by the Other they’re purportedly discussing. Moore’s mentor, Al Mohler, is not known for flexibility or for conceding he’s made mistakes, but Mohler himself offered a (qualified, conditional, partial) apology and concession in Nashville.

“Early in this controversy, I felt it quite necessary, in order to make clear the gospel, to deny anything like a sexual orientation,” Mohler told the crowd. “I repent of that.”

So even Al Mohler now accepts the reality of sexual orientation — albeit begrudgingly, kinda sorta-ish.

Russell Moore spoke out against the theory of “ex-gay ministry” and so-called reparative therapy at the conference, conceding that it never worked, that it has been “severely counterproductive” and resulted in a situation in which “gay and lesbian people have been treated really, really badly.”

These may seem like relatively minor steps — changes, as Lupfer wrote, of tone but not of substance. These concessions by Mohler and Moore, after all, are little more than belated acknowledgement of undeniable facts.

But when people who have spent years denying the undeniable agree to stop doing that, it’s kind of a big deal. That denial of fact hasn’t just been an insubstantial matter of tone. It’s been a bearing wall — a necessary cognitive defense required to sustain the SBC’s overall anti-gay “stance.”

Without that denial, I’m not sure the SBC’s current position is sustainable. These SBC leaders are finally allowing themselves to admit that LGBT Christians exist, and that they cannot be ungayified through prayer. They are no longer pretending they can’t hear Cornelius knocking on their door. That knocking isn’t going away — it will require further decisions.

For the unsustainable present, though, there may be some tangible good that comes from the SBC’s newfound realization that others can hear what they’re saying and see what they’re doing. In David Gushee’s Changing Our Minds, he describes what he presents as a minimum common ground that all Christians should agree on:

I still think that’s overly optimistic — more aspirational than accurate. After all, while Southern Baptists were gathering in Nashville to agree to some of what Gushee describes there, other anti-gay clergy were preparing to gather in Houston for a rally explicitly defending their Christian “right” to discriminate in employment, housing and public accommodation.

But that ugly gathering in Houston is old news — a dog-bites-man story of the kind of gathering that Richard Land would’ve felt at home in. The bigger news is the Perestroika in Nashville.