NRA: By him all things consist

NRA: By him all things consist November 4, 2014 Fred Clark

First, let’s flip back 200 pages to another passage in this very same book. This is Nicolae Carpathia speaking on page 72:

“As you know, most of the ten world regions that comprise the Global Community destroyed 90 percent of their weapon hardware. We have spent nearly the last two years breaking down, packaging, shipping, receiving, and reassembling this hardware in New Babylon. My humble prayer was that we would never have had to use it.”

That’s from Nicolae’s speech, broadcast to the entire world, shortly after he ordered his Global Community Air Force to nuke New York, Chicago, Washington, London and Cairo. Shortly after this speech he would also nuke Dallas, Los Angeles, San Francisco, and apparently several more major cities that the authors couldn’t be bothered to list.

Nicolae starts out by saying “As you know” to acknowledge that everyone listening to his voice — which is to say, everyone on the planet — already knows all of this. Those people, the characters who inhabit the fictional world now ruled by this fictional Antichrist, do not need to be reminded of any of this. It shapes their entire reality.

But Jerry Jenkins thought it would be useful, back on page 72, to remind his readers of that reality — the reality of the world he’s describing for them. That whole “as you know” passage is thus a little refresher for readers to remind them of what they’ve already been told — repeatedly — earlier in this book and throughout the previous two books in the series.

Here is the information that Jenkins, on page 72, wanted to make sure readers had not forgotten:

1. Nicolae Carpathia leads a One World Government called the Global Community. All national boundaries and national sovereignties have been abolished, replaced by the GC, which is divided into 10 regional principalities.

2. Carpathia instituted total worldwide disarmament. Every weapon — every missile and tank, every fighter jet and submarine, every rifle or handgun — was either destroyed or handed over to the Global Community.

Apparently some militia groups in the backwoods of America had refused to surrender their weapons and, in the early chapters of Nicolae, they attempt a rebellion, led by the former president of the former United States. Carpathia and his Global Community Air Force — the only air force in the world, remember — slaughter these insurrectionists and then go on to kill tens of millions of others in cities all over the world because … well, just because he’s evil, apparently. The reason for this wanton nuclear destruction of major population centers is never really explained.

That’s what happens in the first 100 or so pages of this book. That’s Chapters 1-4. We didn’t imagine reading that. This is what we were told, explicitly, by the authors.

Only about five days of story time have passed in the 200 pages since then, but in those 200 pages we’ve encountered countless things that seem to contradict what we know from that “As you know” passage back on page 72. Everyone Buck has come across since then seems to be living in a different fictional world than the one described above. He’s met armed Chicago police officers who seem to be citizens of the still-sovereign nation of the U.S., and he’s met armed Egyptian soldiers who seem to be citizens of the sovereign nation of Egypt.

We can’t seem to believe any of the things that we’re supposed to “as you know.”

And the beginning of Chapter 14 only confuses things further. Buck wakes up on Ken Ritz’s plane, 10 hours into their flight back to America (or to still-smoldering wreckage of the region of the Global Community that used to be America).

He limped forward, “How are you doing, Cap?”

“A lot better, now that we’re over American air space. I had no idea what you guys got yourselves into, and who knew what kind of fighter pilots might have been on my tail.”

Well, “as you know,” there’s only one kind of fighter pilot in this fictional world. Or at least that’s supposed to be true. But then there’s also not supposed to be any such thing as “American air space,” so Ritz’s confusion is understandable. After all, he just had to go through “customs” back in “Egypt,” despite having been on a domestic flight from one part of the Global Community to another.

As we’ve discussed before, it seems the only way to cope with this kind of wildly inconsistent world-building and nonsensical continuity is to just surrender. Just go with it. Allow the reality of Jenkins’ world to flip-flop back and forth from one thing to its opposite. There’s universal disarmament. No there’s not. There’s a one-world government. No there’s not.

The whole belabored Escape From Israel subplot seemed set in a different universe from the one in the first four chapters of this book. It was a separate story within a story set in a different world with a different premise. In this inset story, Egypt and the Egyptian army still exist. In this inset story, the global nuclear war that began five days ago is never mentioned and never a factor. Here in this subplot, the foremost concern on the mind of every (armed) police force in all of the many sovereign nations is the capture of a renegade former rabbi.

It’s dizzying, trying to switch back and forth between fictional realities, but it’s the only way to make sense of everything we’ve read in the previous few chapters.

And yet, just when you imagine you’ve found a way to do that — just when Ken Ritz’s comments about air space and multiple air forces have you convinced that you can make this work if you just bracket this whole subplot as a separate universe — the next sentence reasserts the other reality and the contradictions all come crashing back down on you.

“A lot better, now that we’re over American air space. I had no idea what you guys got yourselves into, and who knew what kind of fighter pilots might have been on my tail.”

“I don’t think we were worth all that, with World War III going on,” Buck said.

Impossible. Nothing, absolutely nothing about the previous several chapters can be made to make a shred of sense if World War III were still going on. Readers are required to accept that it is. And to simultaneously accept that it is not.

Tim LaHaye believes that those left behind after the Rapture will still have a chance to convert to real, true Christianity and therefore be saved. That’s the whole premise of these books — the adventures of these “Tribulation Saints” in the post-Rapture world.

This idea is the source of some controversy in the contentiously insular world of “Bible prophecy scholars” and premillennial dispensationalist mythology. LaHaye — like Donald W. Thompson before him — was criticized by some of his “prophecy” peers for this belief in the possibility of post-Rapture conversion. The phenomenal sales of the Left Behind series has sidelined most of those critics, but some still cling to the opposing belief that at the Rapture, God would somehow retract the Holy Spirit from the Earth, abandoning depraved humanity to its damnable fate. In their view, the post-Rapture world will be Hell on Earth — the absence of God.

That’s based on an understanding of the Holy Spirit that’s impossible to reconcile with orthodox Trinitarian theology — but then orthodox theology has never been a sticking point among “Bible prophecy scholars.” But there’s also a kind of logic to the idea. If these new Christians are running around, then wouldn’t they constitute a kind of Tzadakim Nistarim whose righteous presence as salt and light should cause God to refrain from pouring forth the wrath of the Great Tribulation? “Wilt thou also destroy the righteous with the wicked? Peradventure there be fifty righteous within the city: wilt thou also destroy and not spare the place for the fifty righteous that are therein?”

As I said, Tim LaHaye disagrees with this view. He believes that the Holy Spirit will remain on Earth after the Rapture — present in the “hearts” and efficacious prayers of the Tribulation Saints. The post-Rapture world is inevitably damned for destruction, in LaHaye’s scheme, but he believes that some potential saving grace is still available for those who repent and say the magic words.

But if, in LaHaye’s post-Rapture world, the Holy Spirit has not withdrawn all divine presence and prevenient grace, perhaps some other aspect of divine providence has been withdrawn. Consider this passage from Colossians 1:

For by him were all things created, that are in heaven, and that are in earth, visible and invisible, whether they be thrones, or dominions, or principalities, or powers: all things were created by him, and for him: And he is before all things, and by him all things consist.

Maybe this is they key to how we need to think about the fragmented, contradictory fictional universe of the Left Behind series. Maybe this is what can allow us to encounter impossible passages like the start of Chapter 14 without closing the book in frustration over its utter inconsistency. 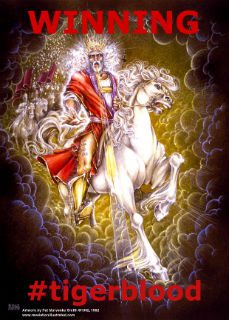 In the fictional universe of Left Behind, Jesus has come back to claim his own, whisking them off to Heaven before they die. And in seven years, after the Tribulation, Jesus will return in fury and wrath, just winning every second and just delivering the goods at every frickin’ turn.

But in the meantime Jesus is absent. The one by whom “all things consist” has abandoned the world for the seven years of this story.

And without Jesus, this world cannot consist. It has become existentially inconsistent. All things cannot hold together.

This seems strange and incomprehensible to us because we live here, in what dispensationalists call the “Church Age.” In our world, all things hold together and consist. But that all ends with the Rapture. In the same instant, the same twinkling of an eye in which Irene and Raymie and all those passengers on Rayford’s plane vanished, so too did the consistency we take for granted. Logic, coherence and non-contradiction vanished into thin air along with all the children and the devout RTCs, leaving behind only the empty husk of their former clothing.

Either that, or it’s just Very, Very Bad Writing. Probably that.