Sarah Josepha Hale’s campaign coincided with a resurgence of religious fervor in all parts of the country in the 1840s and 1850s, and the idea of an national day of Thanksgiving was championed in particular by the Presbyterian church. But, at the same time, a stronger, more divisive force was on the rise: the growing sectional debate over the institution of slavery.

For her part, Hale hoped a national Thanksgiving holiday would foster national unity and encourage compromise. But the same evangelical Protestant denominations who most strongly advocated for Thanksgiving were also among the most ardent abolitionists. As Diana Karter Appelbaum puts it in her book Thanksgiving: An American Holiday, an American History, more and more Southerners were beginning to view Thanksgiving as a “Yankee abolitionist holiday.”

I wasn’t aware of this history of the Thanksgiving holiday, but it shouldn’t be surprising. Thanksgiving, after all, is part of American culture, and so of course we should expect it to have been influenced by slavery and white supremacy because that’s how everything in American culture works. Particularly the religious bits.

Virginia was the hotbed of anti-Thanksgiving sentiment. In 1853, Governor Joseph Johnson declined to declare a day of Thanksgiving for his state, citing Thomas Jefferson’s firm doctrine of separating church and state. Johnson’s successor, the slave-owning fire-brand Henry A. Wise, was even more intransigent. In 1856, he received the same annual letter from Sarah Josepha Hale that every other governor did, encouraging him to declare a general day of Thanksgiving. Wise not only declined to make the proclamation, but fired back a testy refusal.

“This theatrical national claptrap of Thanksgiving,” he declared, “has aided other causes in setting thousands of pulpits to preaching ‘Christian politics’ instead of humbly letting the carnal Kingdom alone and preaching singly Christ crucified.” By “other causes,” of course, he meant abolitionism.

Wise offers there a classic articulation of what is often described as an otherworldly, “a-political” form of evangelical faith. Christians, he said, should be “preaching singly Christ crucified” and not meddling in “politics.” 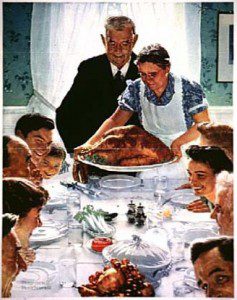 This strain of white evangelicalism was (and is) certainly otherworldly, but despite Wise’s claims, it was not, and never has been, non-political. As Wise’s political condemnation of “Christian politics” reveals, his otherworldly religion was transparently political, through and through. It is a form of religion that cannot be understood apart from its political intent and its political agenda.

Keep in mind that Wise was a governor, acting in his capacity as governor, when he offered this lecture on the proper content of Sunday sermons.

Re-read that last paragraph summarizing Wise’s rejection of “Christian politics” and then read this, from Carolyn Dupont’s discussion of “White Supremacy, Evangelicals, and Mississippi’s 1964 Freedom Summer“:

If by June of 1964 Mississippi’s white Christians had not adequately disavowed racial integration, a final opportunity arose when Southern Baptists from across the country streamed to Atlantic City, NJ for their annual convention — just weeks before the three civil rights workers disappeared. Progressives at this meeting offered up a statement that condemned segregation, endorsed civil rights activity, and urged support of the Civil Rights Bill then before Congress. Yet Baptist leaders from Louisiana, Mississippi, and Alabama substituted a much watered-down version that excised all such endorsements and offered only the rather innocuous recommendation that “Christians and churches [act] under the direction of the Holy Spirit and in the spirit of our Lord Jesus Christ.” The Convention narrowly approved the eviscerated statement, relegating the progressive report to the trash heap. And even as Mississippi Baptists returned home to the summer’s escalating violence, they castigated the socially conscious arm of their denomination for its “liberalism” and its attention to the “distraction” of race relations, arguing that the “cause of Christianity is being undermined by leaders who are more interested in social reforms than the Gospel of Jesus Christ.”

It’s the exact same argument. It’s the very same appeal to the very same supposedly non-political gospel in defense of the very same politics of white supremacy. Wherever that status quo was threatened, this argument condemned “politics” and “social reform” as distractions from the otherworldly focus on “the gospel.”

That is the kind of non-political politics that otherworldly evangelicalism always produces because that is the reason this otherworldly religion was invented. Go back a century before Wise and you’ll find the same a-political otherworldly focus from George Whitefield, who managed to preach this “non-political” gospel while simultaneously helping to legalize slavery in the colony of Georgia.

Henry A. Wise could pretend to be “non-political” because his politics were a defense of the status quo. The white evangelicals of the mid-20th century could likewise pretend their politics was “non-political” because it was, similarly, aligned with the status quo they sought to protect. But ever since the Civil Rights Movement, that status quo has been challenged and eroded. Protecting it today — or attempting to “restore” it — requires a different set of pretenses and a different set of claims about the relationship between faith and politics.