Syreeta McFadden, “Ferguson, goddamn: No indictment for Darren Wilson is no surprise. This is why we protest”

Today, Mike Brown is still dead, and Darren Wilson has not been indicted for his murder. And who among us can say anything but: “I am not surprised”?

… The African American body is still the bellwether of the health, the promise and the problems of the American democratic experiment. The message that the Missouri grand jury has now sent to young African Americans – from Ferguson to my classroom and the rest of the world – is that black lives do not matter, that your rights and your personhood are secondary to an uneasy and negative peace, that the police have more power over your body than you do yourself.

The shooter’s friends always feel obliged to defend him with the same tired words: “He is not a racist.”

He probably isn’t, at least not in the way they understand the term.

But what he is, is a citizen of a country where the fear of black men is downright viral. That doesn’t mean he burns crosses on the weekend. It means he’s watched television, seen a movie, used a computer, read a newspaper or magazine. It means he is alive and aware in a nation where one is taught from birth that thug equals black, suspect equals black, danger equals black.

Thus has it been since the days of chains, since the days of lynch law, since the days newspapers routinely ran headlines like “Helpless Co-Ed Ravished by Black Brute.” It is the water we drink and the air we breathe, a perception out of all proportion to any objective reality, yet it infiltrates the collective subconscious to such an unholy degree that even black men fear black men.

The Groubert video offers an unusually stark image of that fear in action. Viewing it, it seems clear the trooper is not reacting to anything Jones does. In a very real sense, he doesn’t even see him. No, he is reacting to a primal fear of what Jones is, to outsized expectations of what Jones might do, to terrors buried so deep in his breast, he probably doesn’t even know they’re there.

Every bullshit detector in me went off when I read that passage. Which doesn’t mean that it didn’t happen exactly the way Wilson describes. But it is, again, hard to imagine. Brown, an 18-year-old kid holding stolen goods, decides to attack a cop and, while attacking him, stops, hands his stolen goods to his friend, and then returns to the beatdown. It reads less like something a human would do and more like a moment meant to connect Brown to the robbery.

In all, Darren Wilson did his job when he killed Michael Brown. The historic and contemporary role of police in America is to manage, control, kill, and intimidate black folks, brown folks, and the poor.

The grand jury’s decision that there is no “probable cause” to indict Darren Wilson is an apt summation of how black life is cheap in America, and a white cop who kills a black person is acting in the grand and long tradition of white supremacy and white on black and brown police violence in the United States. 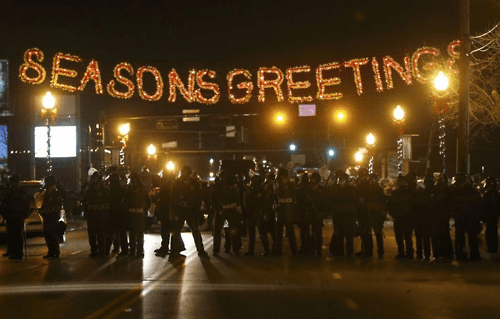 This is the system that this morning I am being told I have to “trust” and “put my faith in.” The one that was never meant to protect anyone who looks like me. The system that allowed Darren Wilson to walk, and arranged a public shaming of the victim and his family in a strange tirade where the county prosecutor defended the officer accused of killing an unarmed black man and ripped into the eyewitnesses as being anything but credible. The system that decided that 8 PM local time was the best time to announce the decision after supposedly sitting on that decision for a weekend. The system that took over 100 days to determine that there was no evidence worthy of even sending this case to trial. The system in that photo above, I am being told, I have to “believe in”.

You will excuse me if I withhold that benefit of the doubt.  In his testimony, Wilson, a 6’4″ man, referred to Mike Brown as “it”, and “a demon.” He wasn’t human. He was a thing, and there’s no penalty for shooting a thing and so this thing was shot time and time again because it had to be put down, a monster, a beast, a nightmare made flesh.

Which is to say this: It would have been powerful to see charges filed against Darren Wilson. At the same time, actual justice for Michael Brown — a world in which young men like Michael Brown can’t be gunned down without consequences — won’t come from the criminal justice system. Our courts and juries aren’t impartial arbiters — they exist inside society, not outside of it — and they can only provide as much justice as society is willing to give.

Unfortunately, we don’t live in a society that gives dignity and respect to people like Michael Brown and John Crawford and Rekia Boyd. Instead, we’ve organized our country to deny it wherever possible, through negative stereotypes of criminality, through segregation and neglect, and through the spectacle we see in Ferguson and the greater St. Louis area, where police are empowered to terrorize without consequence, and residents are condemned and attacked when they try to resist. 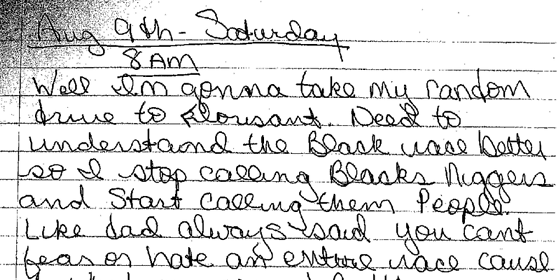 Martin Luther King Jr., in The Other America, 1968

It is not enough for me to stand before you tonight and condemn riots. It would be morally irresponsible for me to do that without, at the same time, condemning the contingent, intolerable conditions that exist in our society. These conditions are the things that cause individuals to feel that they have no other alternative than to engage in violent rebellions to get attention. And I must say tonight that a riot is the language of the unheard. And what is it America has failed to hear? It has failed to hear that the plight of the negro poor has worsened over the last twelve or fifteen years. It has failed to hear that the promises of freedom and justice have not been met. And it has failed to hear that large segments of white society are more concerned about tranquility and the status quo than about justice and humanity.

• Max Fisher, “How we’d cover Ferguson if it happened in another country”

November 25, 2014
The lie of 'the Black Problem' is not just immoral, it's illogical
Next Post

November 28, 2014 Happy Thanksgiving
Recent Comments
0 | Leave a Comment
Browse Our Archives
get the latest from
slacktivist
Sign up for our newsletter
POPULAR AT PATHEOS Progressive Christian
1