A new Washington Post/ABC News poll finds that Americans, by a 59-31 percent margin, believe that CIA “treatment of suspected terrorists” in detention was justified.

A plurality deemed that “treatment” to be “torture,” by a 49-38 percent margin.

Sixty nine percent of white evangelicals believe the CIA treatment was justified, compared to just 20 percent who said it was not. (Those numbers, incidentally, roughly mirror the breakdown of Republican versus Democratic voters among white evangelicals.)

What is the one common trait uniting all of that 69 percent of white evangelicals applauding CIA torture? They’re “pro-life,” of course.

That means they have the moral high ground. It’s what makes them morally superior to everyone else.

Just ask them, they’ll tell you. 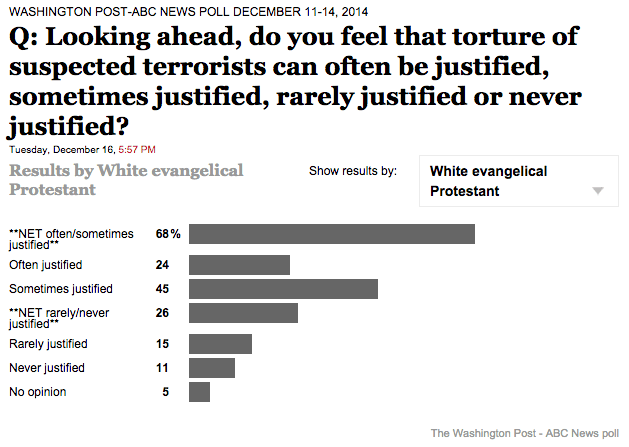 That 26-percent minority of white evangelicals who say torture is never/rarely justified? Those are the folks the other 74 percent like to refer to as “post-evangelicals.”

I don’t know of a greater indictment against American evangelicalism than the fact that a majority of its adherents actually admit they support the use of illegal torture on suspected terrorists. …

Evangelical support of torture is what we might call an “eruption of the real.” It’s a horrifying moment of unintended truth-telling where we discover that allegiance to national self-interest trumps allegiance to Jesus Christ. Now with the release of the Senate’s report of the C.I.A.’s use of torture I’m calling on American evangelicals to stop playing games and decide if they are going to be Christian or not. …

Apparently Christianity has become so incomprehensible in the security state of America that millions of evangelicals think they can be Christian and support torture. But they cannot.

Obviously, Zahnd is just an unwitting apologist for the Satanic baby-killers.

December 16, 2014
A 'siege' and a manhunt and the ongoing American 'death cult'
Next Post

December 16, 2014 NRA: The underground church
Recent Comments
0 | Leave a Comment
"A lot of the damage from the pandemic is squarely on him. I think with ..."
Cobalt Blue Refugees, limits and capacity
"Ya, I always wondered I'd any if them thought that part through. They probably assume ..."
Cobalt Blue Refugees, limits and capacity
"In his defense, where would a spine have gotten him?"
WingedBeast Downpressor man, where you gonna run ..."
"That's not "goth", that's just plain *nihilism*! That's the kind of thinking that breeds ISIS/ISIL/DAESH, ..."
reynard61 Downpressor man, where you gonna run ..."
Browse Our Archives
get the latest from
slacktivist
Sign up for our newsletter
POPULAR AT PATHEOS Progressive Christian
1