The Bible is clearly ambiguous, but not that kind of ambiguous

The statement that the Bible is ambiguous is, itself, ambiguous.

But the fact is that the Bible itself was unable to settle the matter of “what the Bible says about slavery.” Christians studied it with great enthusiasm and devotion, but the more they studied, the more muddled and divisive and polarized the disagreement became. Ultimately, in Mark Noll’s darkly comic phrase, it was “left to those consummate theologians, the Reverend Doctors Ulysses S. Grant and William Tecumseh Sherman, to decide what in fact the Bible actually meant.”

Let’s point out the obvious here: slavery is not a peripheral, trivial bit of adiaphora. Whether we’re talking about the fundamentals of human morality and ethics or about the central themes that have shaped American history, American politics and American religion, slavery is and has always been a top-tier matter of prime significance. If the Bible proved to be of no help on such an essential matter as that, then it seems like it’s an open question as to whether the Bible is really helpful for guidance on anything. 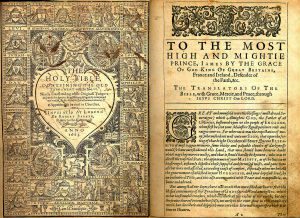 As such, it’s the form of ambiguity that we tend to wish we were dealing with. And thus, whether the subject is slavery or predestination or anything else, if you say that the Bible is ambiguous, people will usually respond as though this was the only possible form of ambiguity. They will respond by demonstrating that the Bible is, in fact, not lacking in clear, definitive and categorical statements on the subject. They will cite examples of such clear, definitive statements as evidence that they say settles the matter.

Imagine you’ve been assigned a term paper, but nowhere in the professor’s instructions did she indicate how long the paper needed to be. That’s the simpler form of ambiguity, and the easier problem to solve. That’s not the kind of ambiguity we find when we read the Bible.

Now imagine that you’ve been assigned a term paper and the professor’s instructions clearly state that it must be at least 15 pages long and that anything less than 15 pages long will result in a failing grade. But then, later down the page, those same instructions also clearly state that the paper must be no longer than 10 pages, and that any paper longer than 10 pages will result in a failing grade. Either of those statements, taken by itself, would be clear and obvious and forthright. But taken together, those two clear statements make the overall instructions impossibly ambiguous.

Now imagine you’re trying to figure out these instructions by discussing them with a classmate. “What’s the problem?” he asks. “What part of ‘at least 15 pages long’ don’t you understand? That couldn’t be clearer. If you’ve got a problem understanding what the instructions clearly say, then it must be because you’re rebellious, or because you just don’t want to follow instructions.”

That is, more or less, the state of biblical studies within white evangelicalism here in America. It’s focused on the wrong kind of ambiguity.